(RNS) — Ninety Jewish organizations, including some of the largest in the U.S., hosted a virtual rally Thursday (May 27) in response to a recent spate of antisemitic violence in the wake of clashes between Israel and Gaza.

The Day of Action Against Antisemitism was designed to encourage passage of a bipartisan resolution led by Republican Sen. James Lankford and Democratic Sen. Jacky Rosen condemning the recent rise in antisemitic violence and harassment. Rally organizers would also like to see Congress allocate more funding to support the security of synagogues and other religious institutions.

Since May 10, the Anti-Defamation League reported a 75% increase in antisemitic attacks in the U.S., compared with the two previous weeks, for a total of 222 incidents. The incidents of harassment, threats and physical violence followed 11 days of intense clashes between Israelis and Palestinians in Gaza that killed at least 227 Palestinians, including 64 children, and 12 people in Israel. 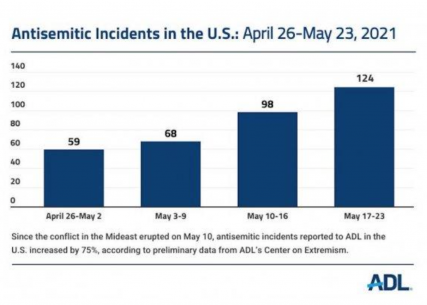 Research by ADL’s Center on Extremism

The attacks on U.S. Jews appeared mostly from people expressing support for the Palestinian cause and criticism of Israel’s right-wing government. They appeared to blame American Jews for the actions of the Israeli government.

In one incident, a 29-year-old New Yorker was on his way to a pro-Israel protest near Times Square last week when he was knocked to the ground in the middle of the street and kicked, punched, hit with a crutch and pepper-sprayed.

In Los Angeles, a number of Jewish men who were outside a sushi restaurant in the Beverly Grove area were assaulted and beaten last week as a car caravan threw bottles and other items at diners.

Antisemitic incidents were also reported in Arizona, Illinois and Nevada.

“The recent attacks on the Jewish community are despicable, and they must stop,” Biden tweeted. “I condemn this hateful behavior at home and abroad — it’s up to all of us to give hate no safe harbor.”

The Conference of Presidents of Major American Jewish Organizations, Hillel International and the American Jewish Congress and the Anti-Defamation League were among the sponsors of the rally, which included individual synagogues and rabbinical groups.