(RNS) — Each week Religion News Service presents a gallery of photos of religious expression around the world. This week’s photo gallery includes the completion of a new Turkish mosque in Istanbul, the anniversary of the killing of George Floyd and more.

Note: RNS is expanding Photos of the Week to include reader photos. Please submit current photos of your practice of religion, spirituality or beliefs HERE. We are especially interested in capturing what it looks like as houses of worship reopen as pandemic restrictions ease. See our most recent installment below. 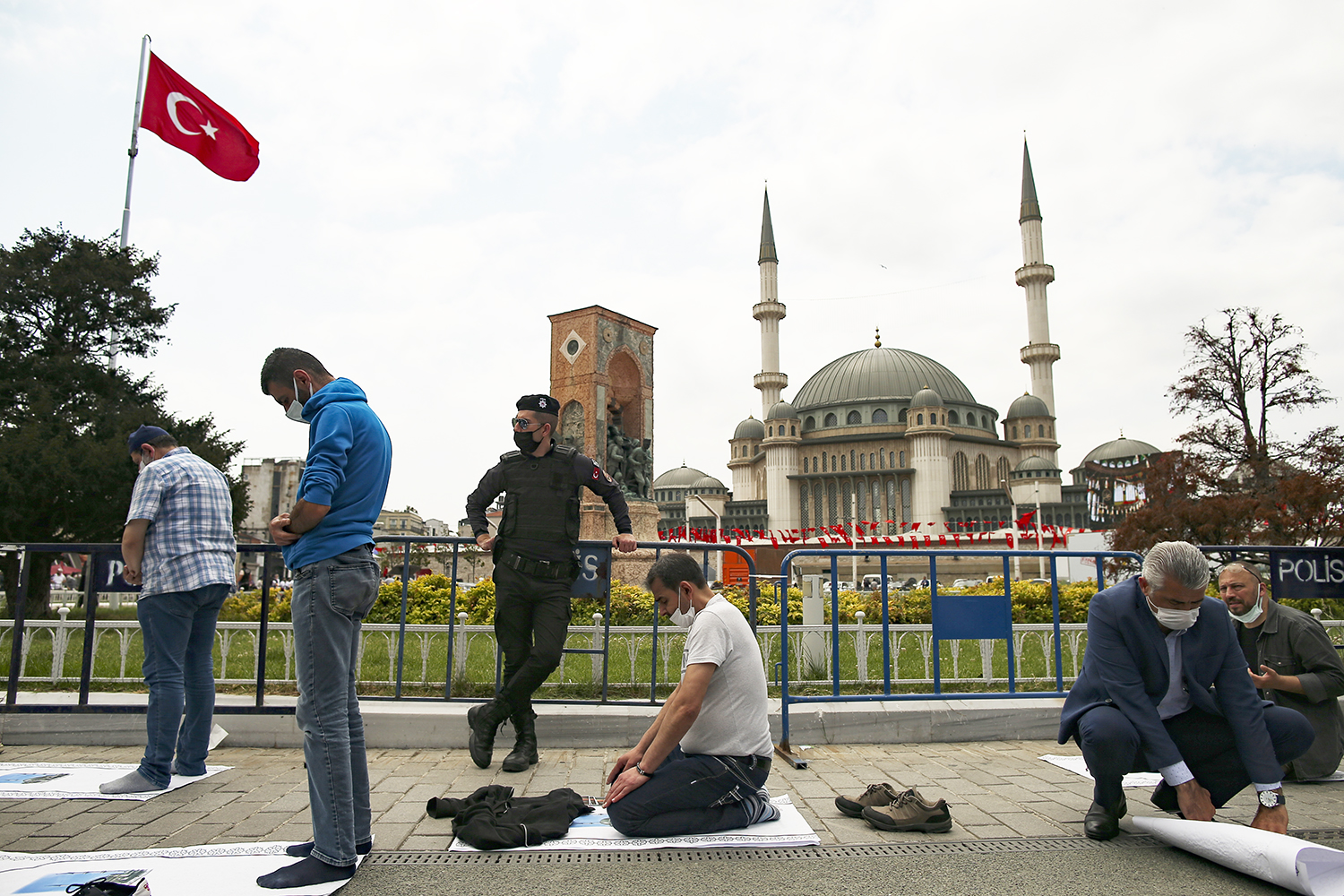 People pray outside the newly built Taksim Mosque at the Taksim Square in Istanbul, Friday, May 28, 2021. Turkish President Recep Tayyip Erdogan inaugurated the landmark mosque, fulfilling a long-time ambition to build a Muslim house of worship in the space that has become an emblem of the modern Turkish Republic. (AP Photo/Emrah Gurel) 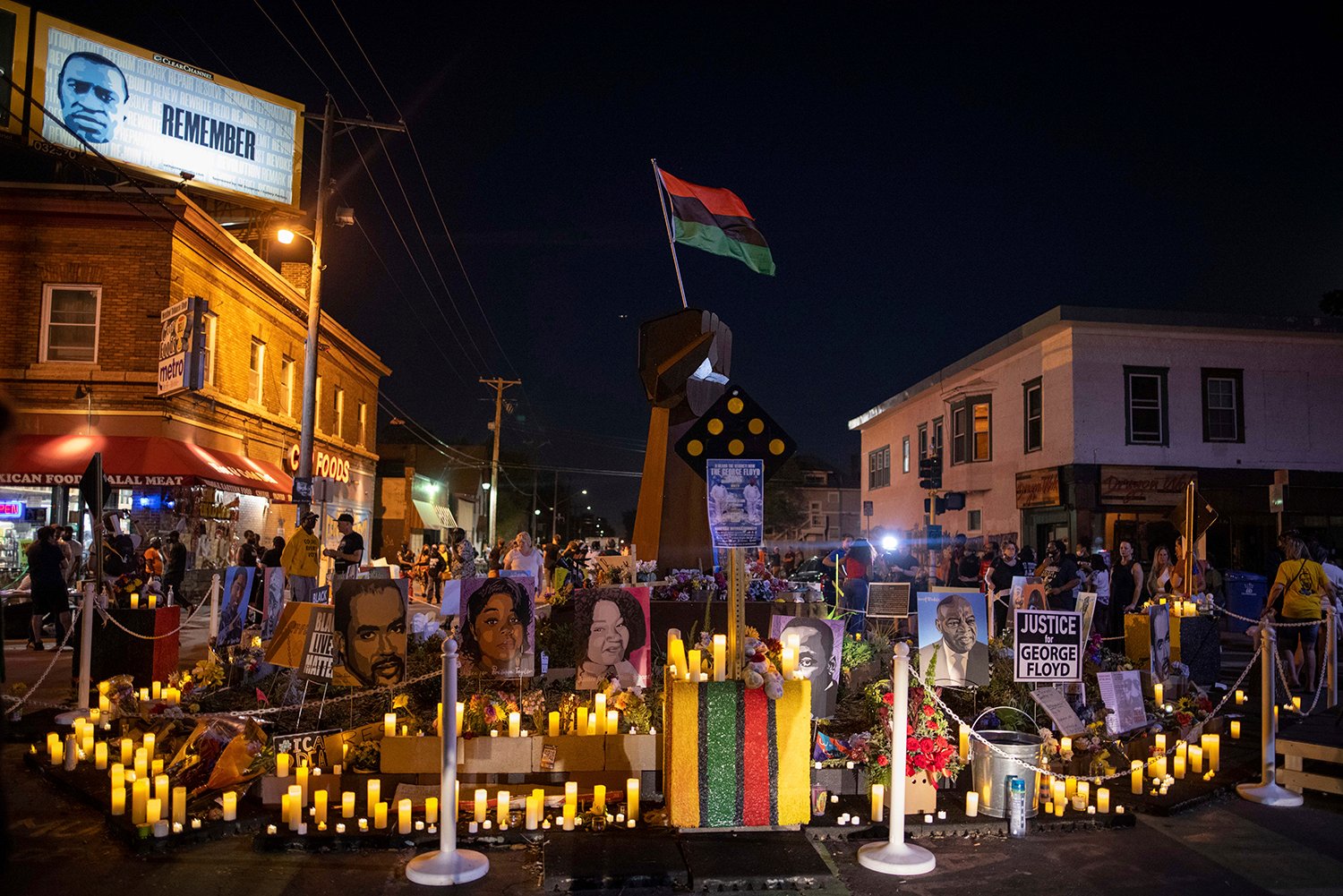 Candles around the iron fist sculpture at 38th Street and Chicago Avenue — informally known as George Floyd Square — on the one-year anniversary of George Floyd’s death, Tuesday, May 25, 2021, in Minneapolis. (AP Photo/Christian Monterrosa) 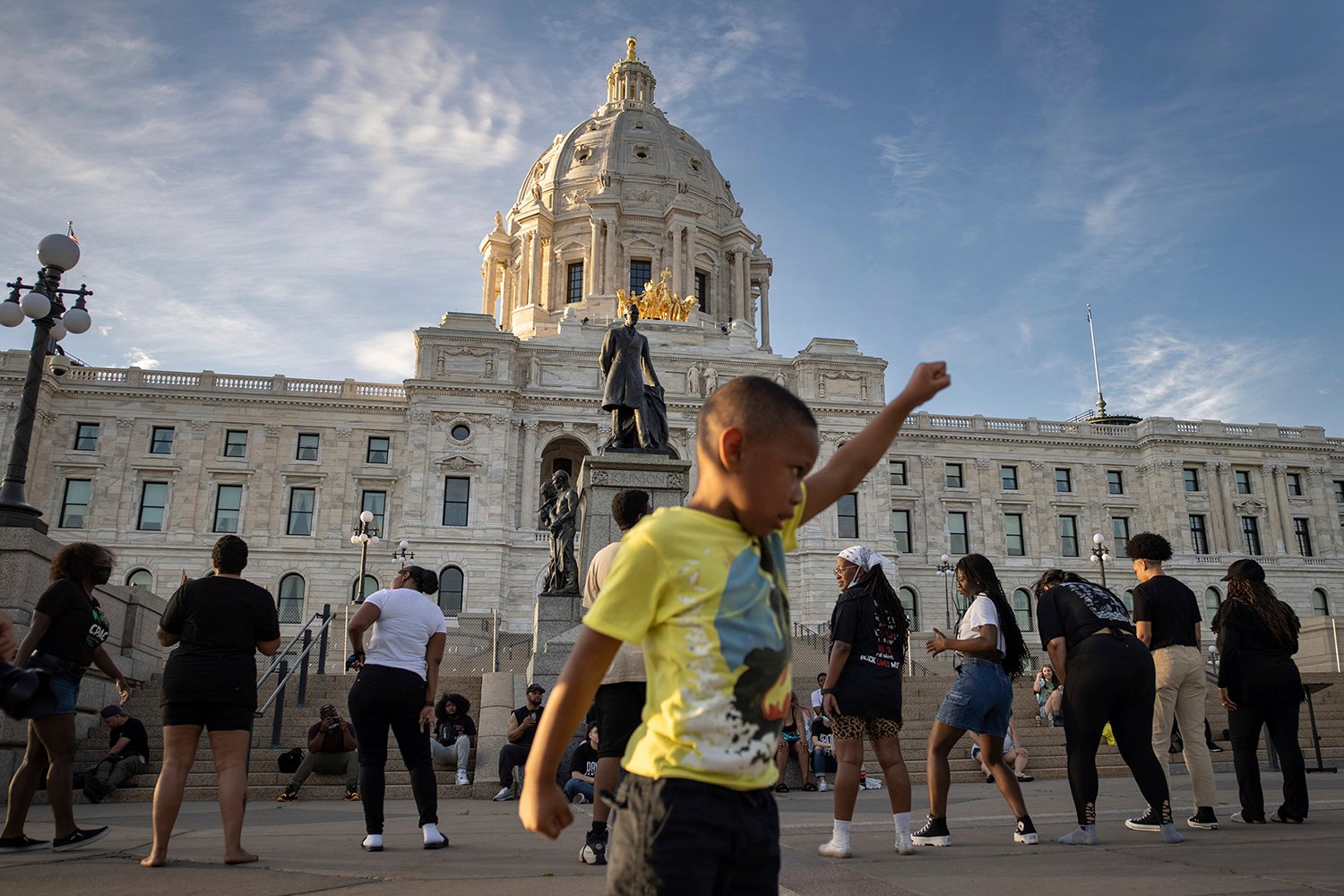 A young boy holds up his fist as people dance at a rally and march May 24, 2021, in St. Paul, Minnesota, organized by families who were victims of police brutality. The event marked the one-year anniversary of George Floyd’s death. (AP Photo/Christian Monterrosa) 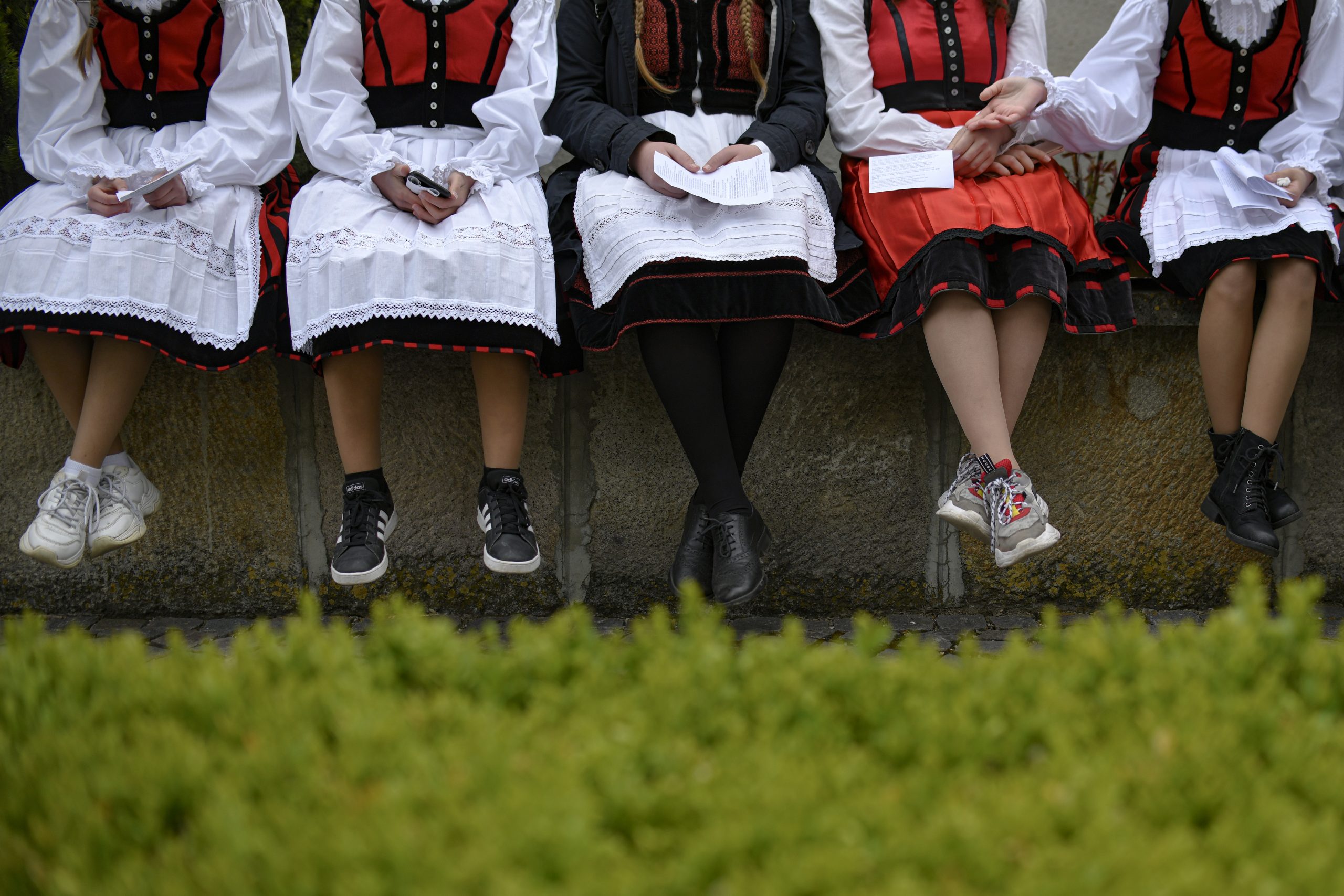 Girls wearing traditional outfits rest during a Catholic pilgrimage attended by tens of thousands who joined their faith’s biggest religious event, in Sumuleu Ciuc, Romania, Saturday, May 22, 2021. More than 35,000 Catholic pilgrims congregated at an open-air shrine in Sumuleu Ciuc in Transylvania on Saturday for an age-old procession that was canceled last year due to the coronavirus pandemic. (AP Photo/Andreea Alexandru) 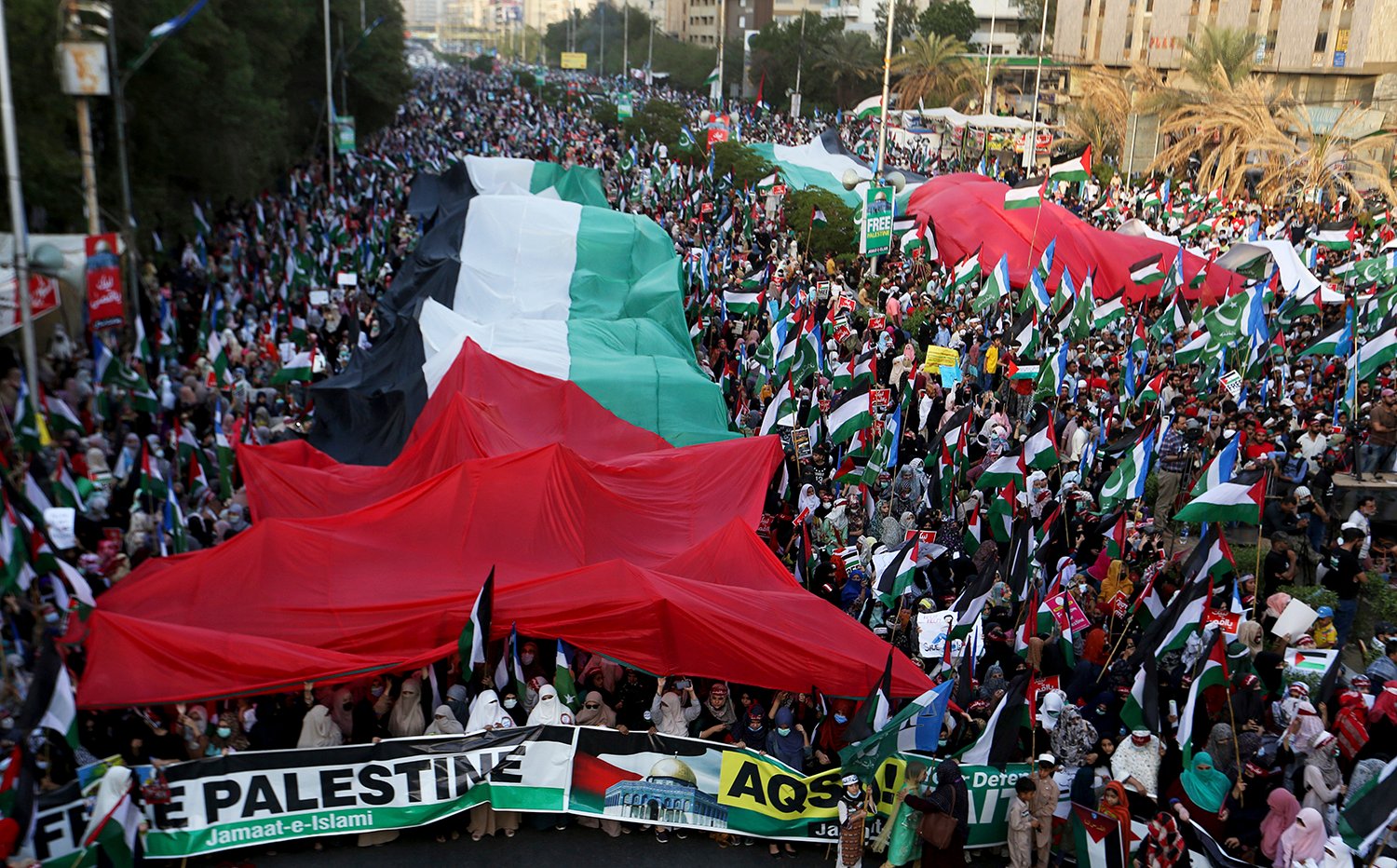 Supporters of the Pakistani religious group, Jamaat-e-Islami, display huge Palestinians flags during a rally in support of Palestinians, in Karachi, Pakistan, Sunday, May 23, 2021. (AP Photo/Fareed Khan) 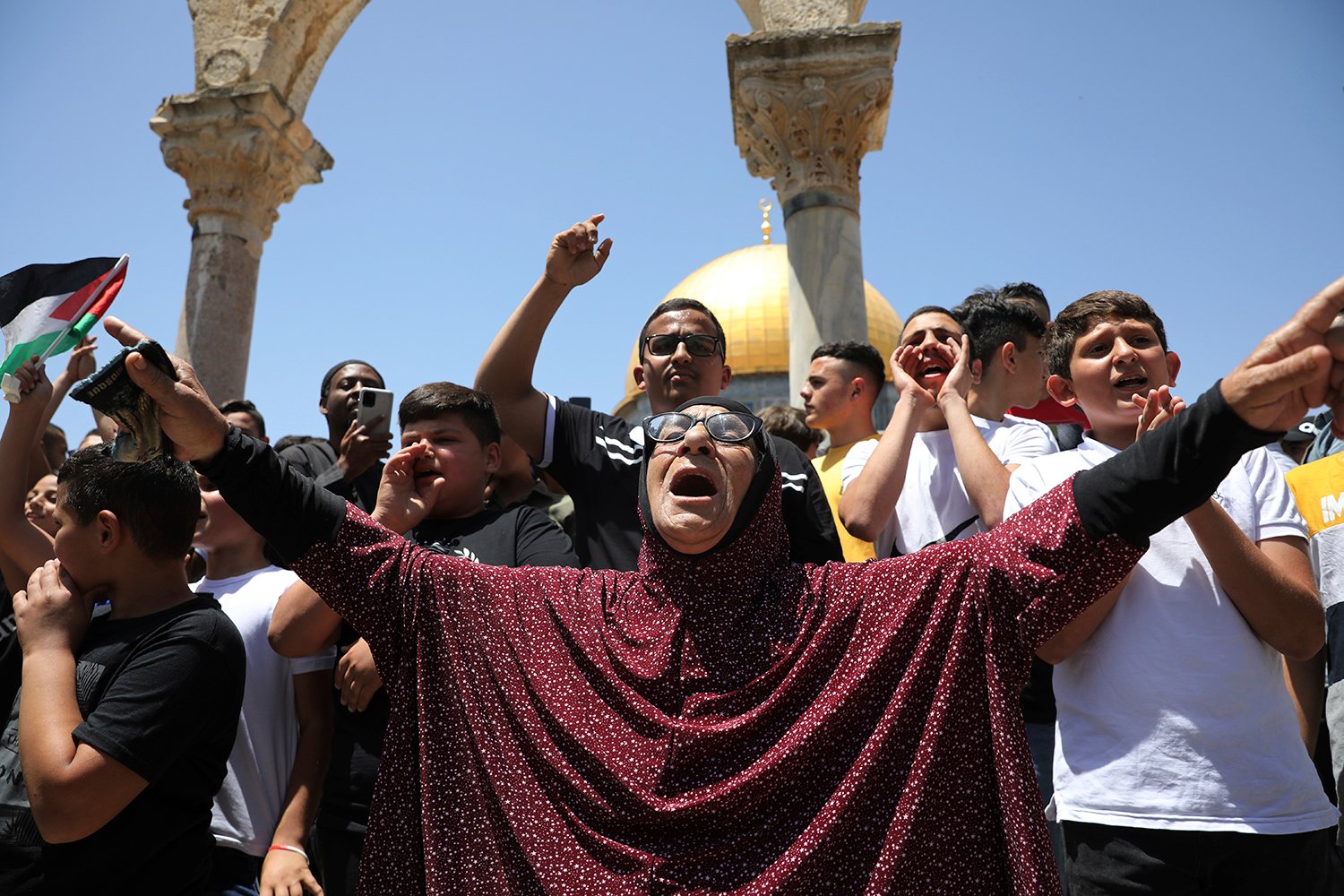 Palestinians chant slogans at a protest following Friday prayers at the Dome of the Rock Mosque at the Al-Aqsa Mosque compound in the Old City of Jerusalem, Friday, May 28, 2021. (AP Photo/Mahmoud Illean) 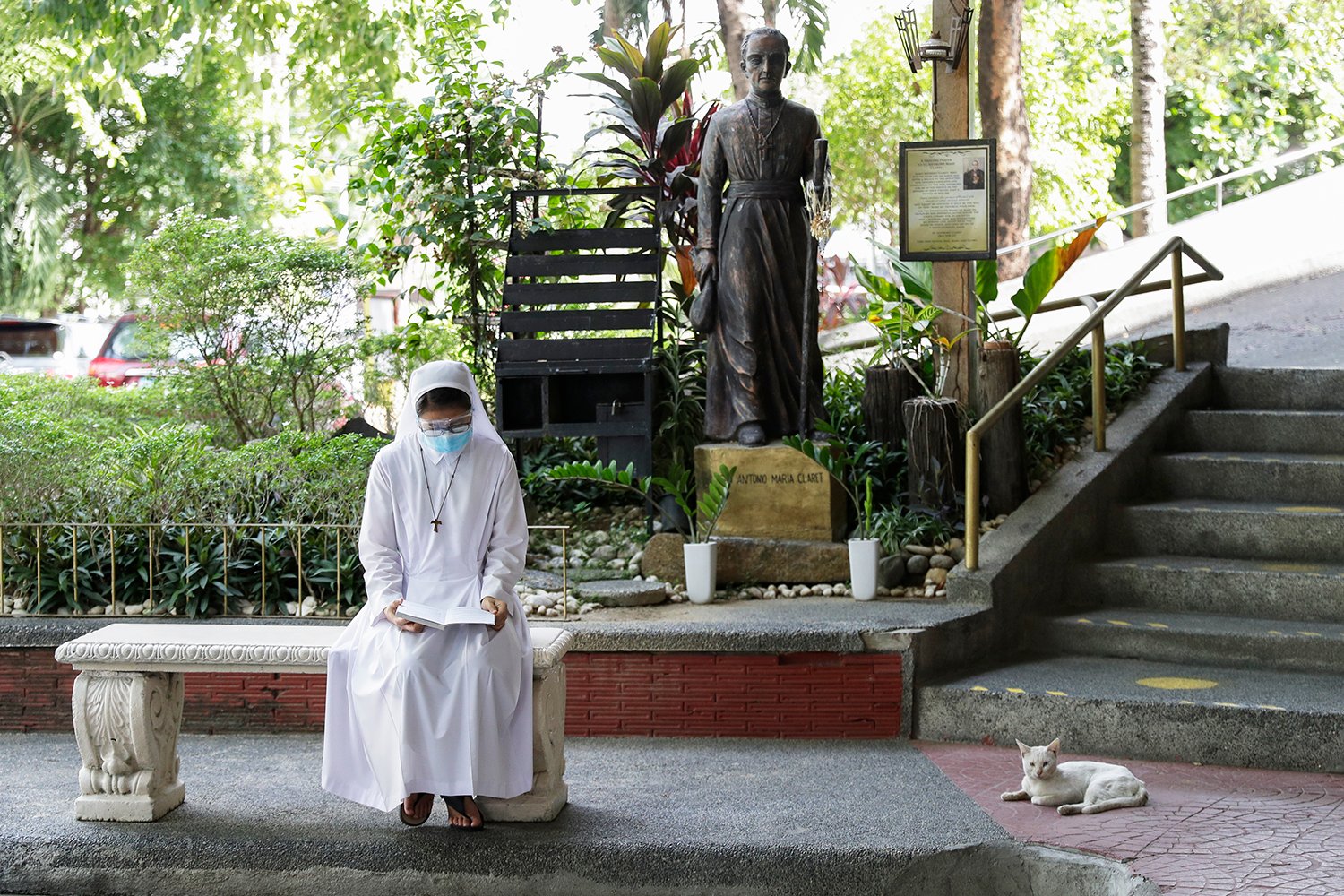 A Catholic nun wearing a protective mask reads outside the Immaculate Heart of Mary Church, which has been turned into a temporary vaccination center in Quezon City, Philippines on Friday, May 21, 2021. Philippine officials have been ordered not to disclose in advance the COVID-19 vaccine brands to be administered in immunization sites after those offering newly arrived Pfizer shots drew big crowds in what could be an indication of public preference for Western vaccines.(AP Photo/Aaron Favila) 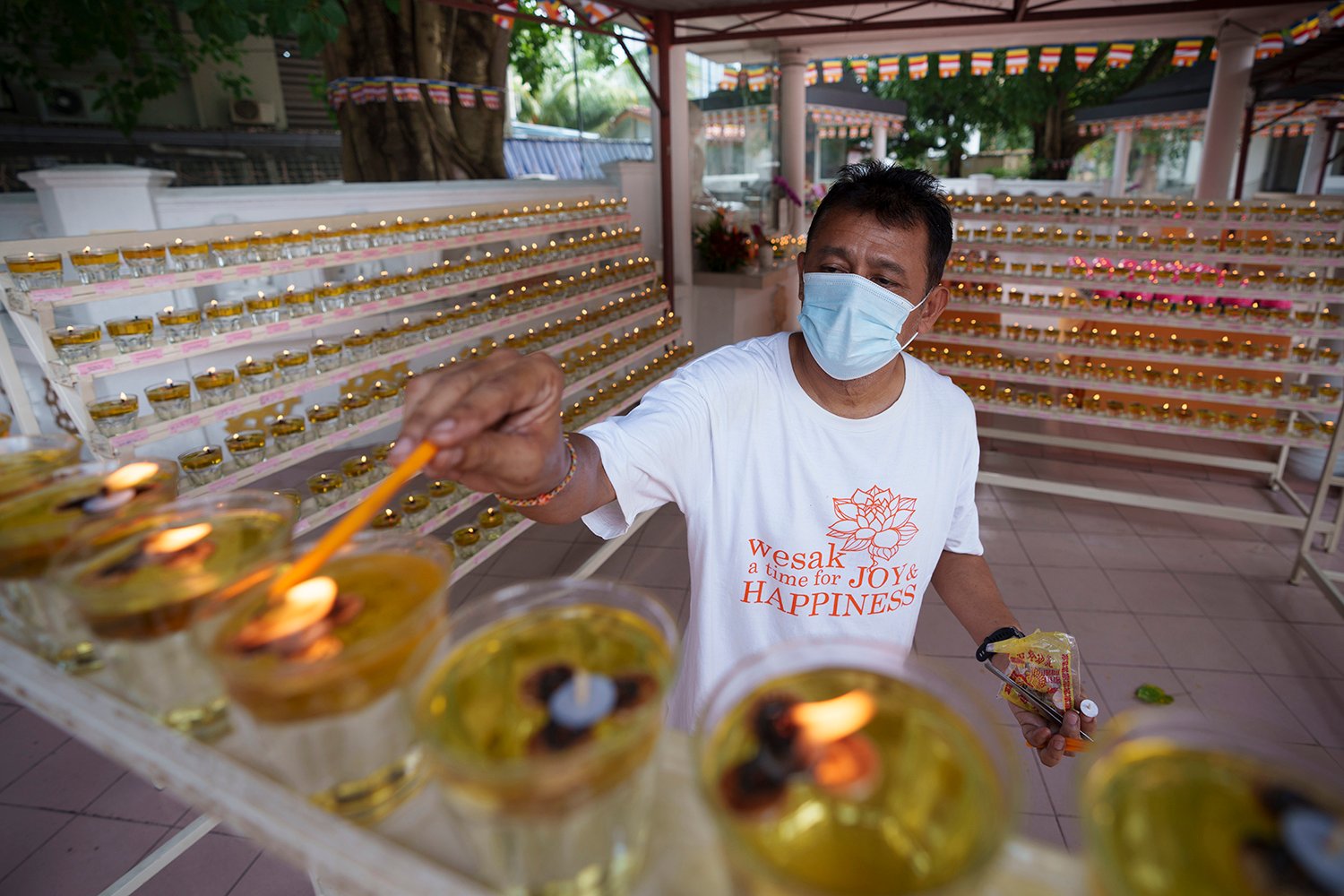 A man wearing a face mask lights a candle from an oil lamp before offering prayers during Wesak Day at a temple in Kuala Lumpur, Malaysia, Wednesday, May 26, 2021. Malaysia’s latest coronavirus surge has been taking a turn for the worse as surging numbers and deaths have caused alarm among health officials, while cemeteries in the capital are dealing with an increasing number of deaths. (AP Photo/Vincent Thian) 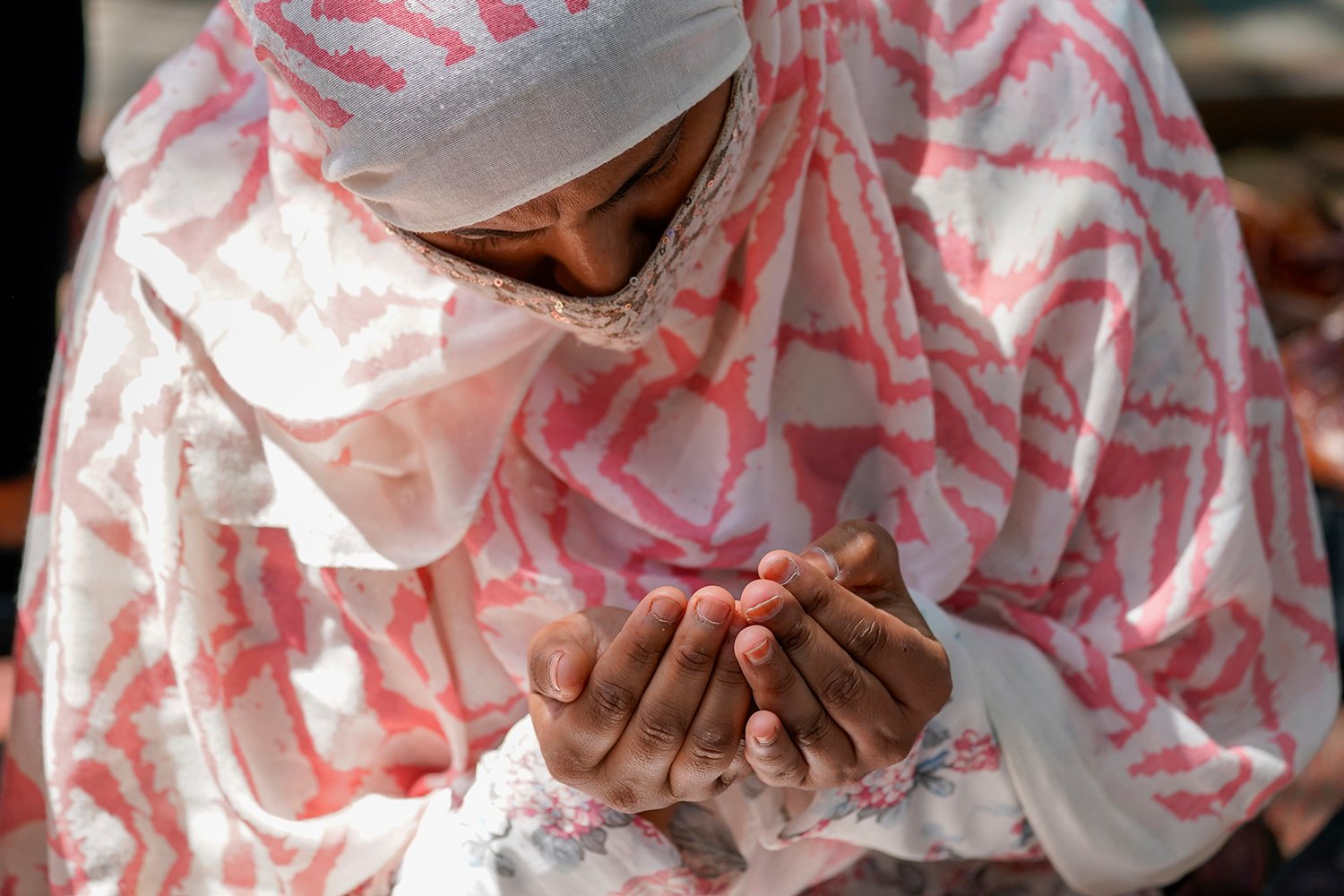 A supporter of the Palestinians performs Friday prayer during a demonstration outside the Israeli consulate in New York, Friday, May 21, 2021. A cease-fire has taken effect after 11 days of heavy fighting between Israel and Gaza’s Hamas government that was ignited by protests and clashes in Jerusalem. (AP Photo/Mary Altaffer) 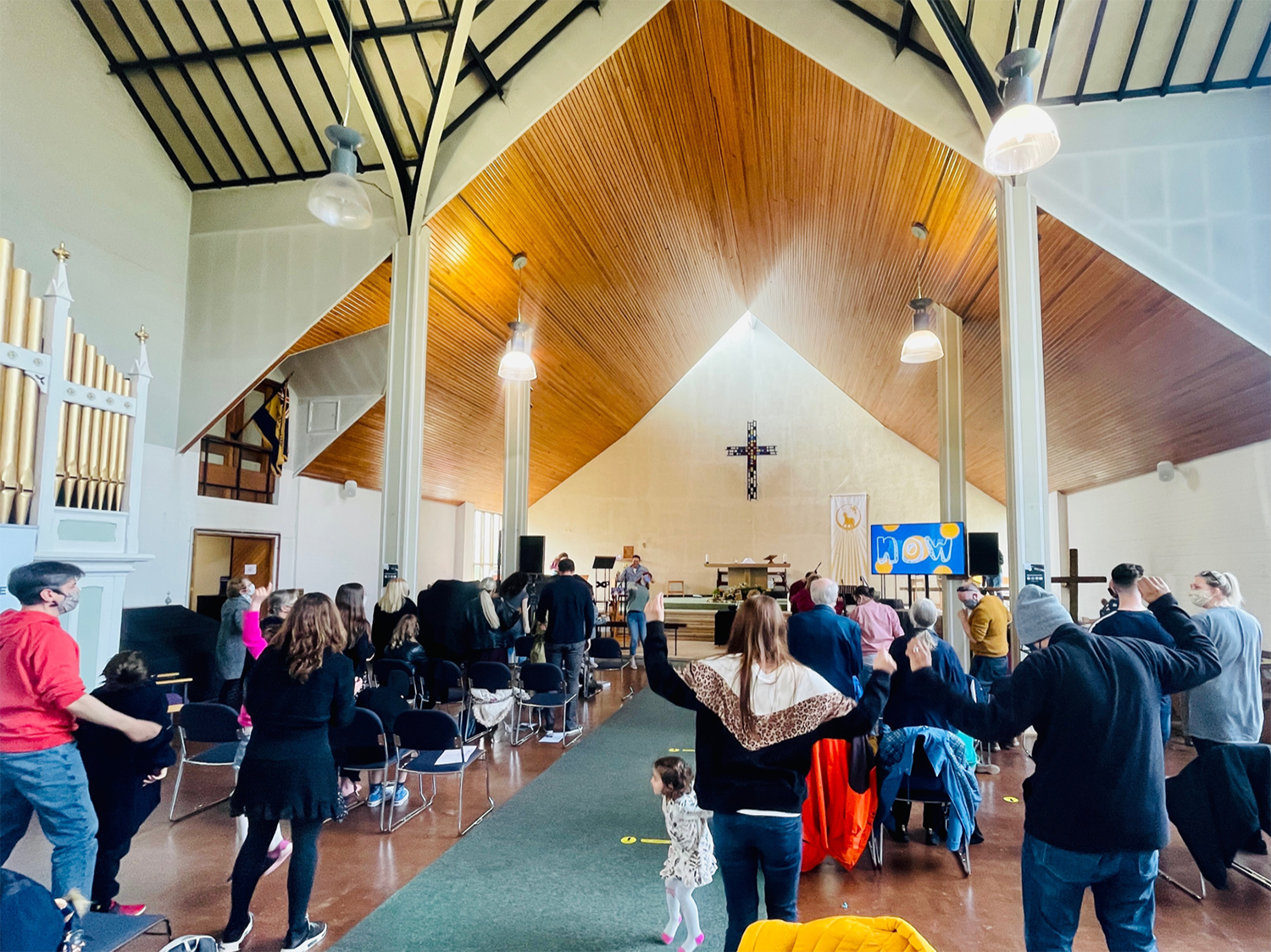 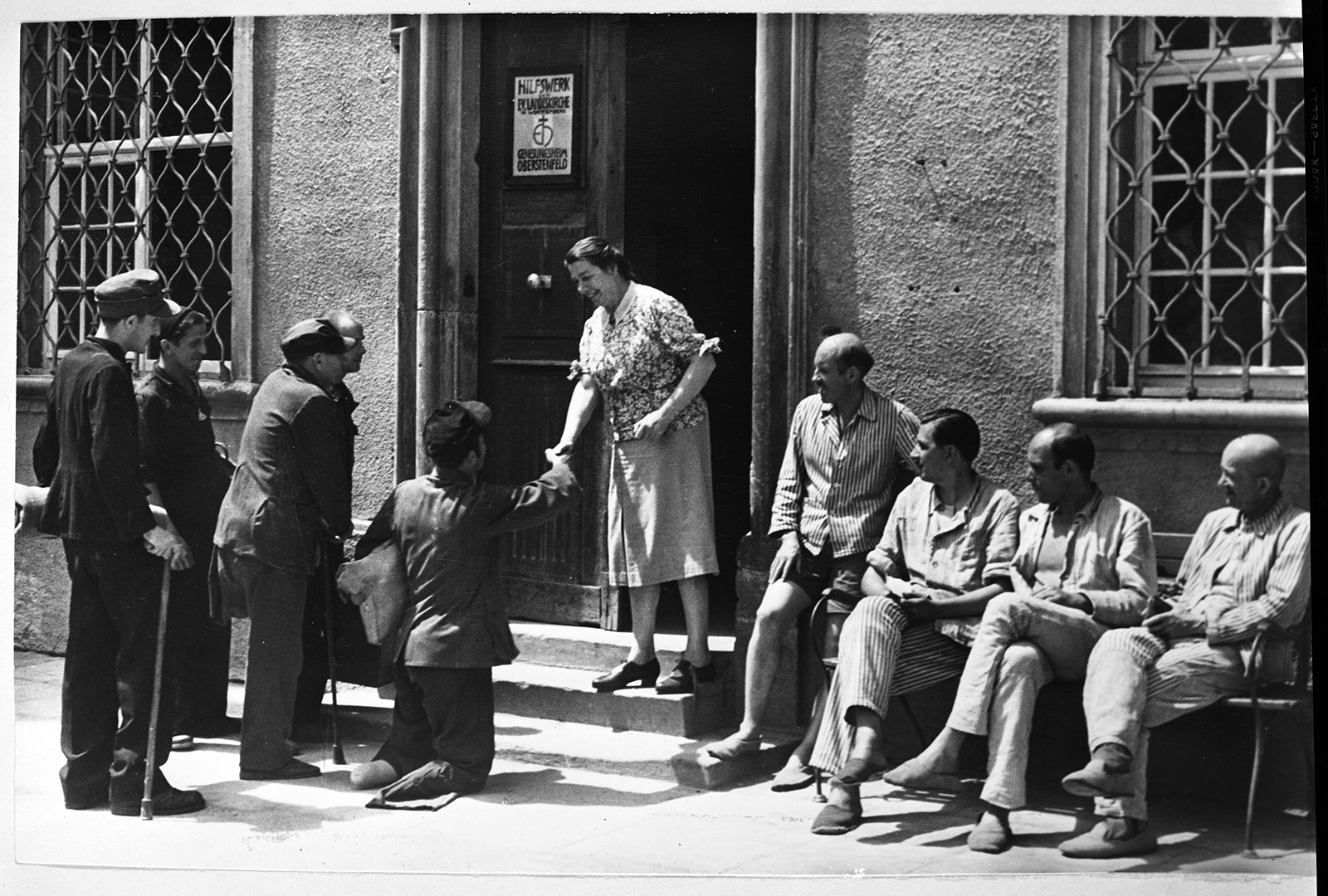 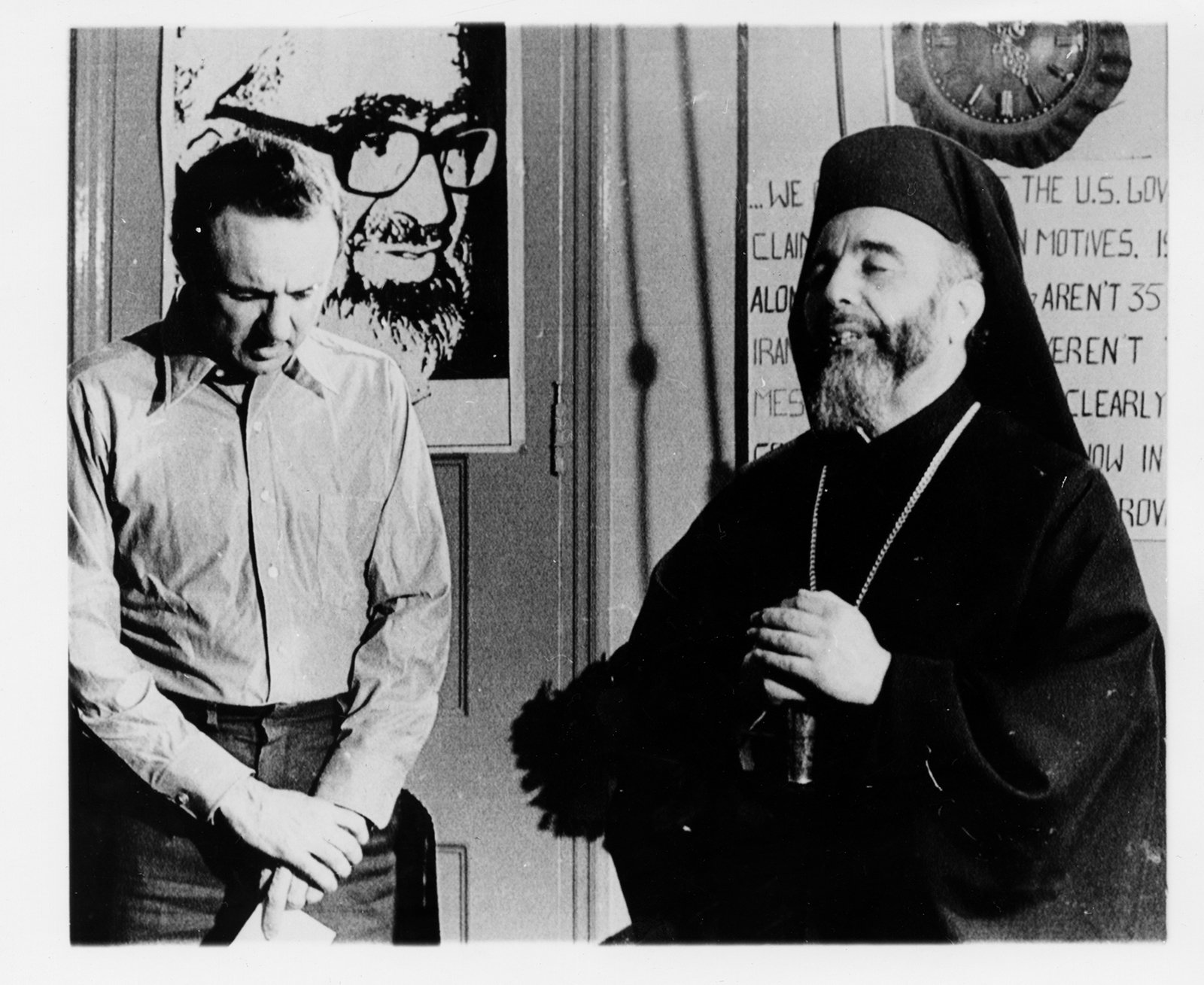 Archbishop Hilarion Capucci, of the Greek Melkite Catholic Church, prays with an unidentified hostage during an Easter visit in the U.S. Embassy in Tehran, Iran, on April 6, 1980. RNS archive photo. Photo courtesy of the Presbyterian Historical Society.