(RNS) — A century ago, a captain on a storm-tossed Navy ship turned to an onboard chaplain for his specialty: prayer.

The USS Olympia, on which they were traveling across the Atlantic, carried not only sailors and Marines but a special cargo. On the weather deck, the top level of the steel warship, was the casket of the Unknown Soldier.

The body inside was that of a soldier felled during World War I and exhumed in France. The man’s name was a mystery, and he was meant to be a symbolic representative for the many soldiers lost to the war whose bodies were never identified.

The story of the Olympia, whose sailors were commanded by Captain Henry Wyman, has seldom been told. But on Friday (May 28), the Independence Seaport Museum of Philadelphia will open a special exhibit, called “Difficult Journey Home,” aboard the ship where the events occurred.

A few days later, on Memorial Day, a new historical marker will be unveiled on the ship docked on the Delaware River near the museum’s building. It will be placed where the coffin rested as the ship rode waves of 20 to 30 feet for much of the 15-day voyage in the fall of 1921.

“(I)t was on this spot that the Marine Honor Guard heroically lashed themselves and the coffin to the ship to prevent them being washed overboard,” the marker reads.

The remnants of a hurricane were likely responsible for making the trip by sea from France to America a perilous one.

“We had some very rough weather coming home, and there were times when we thought we might not make it home,” retired Marine Corps General Graves B. Erskine, who was then a captain in charge of the transport of the unnamed soldier, recalled in an oral history interview four decades later when he was in his 70s.

“The chaplain and the captain got together and he held a special service, praying to God that the ship wouldn’t sink.”

Craig Bruns, chief curator at the museum, said the museum decided to highlight the little-known history on the 100th anniversary of the voyage. 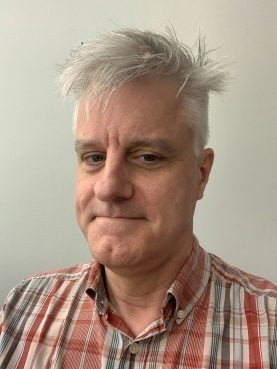 Bruns said the call to prayer by Wyman was a significant part of the tale of the travels of Olympia, which is one of only two ships that remain from World War I.

“He’s very seasoned, so he would know when the ship was in danger or not, and so he determined it was scary enough to comfort his crew with bringing the chaplain in to pray,” he said.

“Ships at sea go through all sorts of difficult conditions at sea. But this one was especially difficult.”

The praying chaplain, Lt. Edward A. Duff, later became the Navy chief of chaplains in 1935.

According to a 1964 article in the Marine Corps Gazette, the prayer occurred in the ship’s galley on the main deck, below the weather deck where the casket had been placed.

“Finally, he prayed aloud that the lone soldier lying unknown in a canvas-covered coffin on a deck far above them would reach the ‘land of the free and the home of the brave,’” reads the article, headlined “In Good Hands.”

“The storm abated in apparent answer to Duff’s prayer.”

Bruns said Duff was not the designated chaplain for the ship, but he happened to be on board.

According to the museum’s interpretation of a Marine honor guard’s report, the rolling put the ship “a mere 10 degrees from being lost at one point.”

After the toll of World War I and the congressional decision to have an unknown soldier represent some thousands of unidentified military members who had died, the captains on the Olympia appeared to feel the weight of their responsibilities.

“There was a lot to pray for,” said Bruns. “These families who’ve lost their loved one, they’re expecting that ship to come and that body to come.”

Erskine, who was quoted in the Marine Corps Gazette story provided by the museum, was fully aware of those expectations. 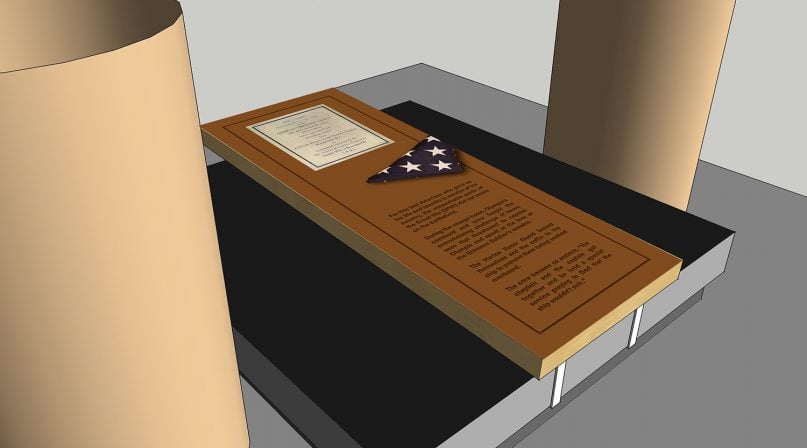 An illustration of the design of the Unknown Soldier Historical Marker that is to be unveiled on Memorial Day. Photo courtesy of En Route

“The agonizing thought came to me: what if the Unknown Soldier — the hero all America awaits to honor — is washed overboard?” he recalled, according to the story. “I knew that if such a thing happened, I might as well jump over with him.”

After the storms subsided, the ship arrived safely at the Washington Navy Yard. The Unknown Soldier lay in state in the rotunda of the U.S. Capitol for two days before a funeral procession carried the casket to its final resting place at Arlington National Cemetery.

On November 11, 1921, the third anniversary of the signing of the armistice that ended the war, the body of the unidentified soldier was buried at Arlington National Cemetery.

The western panel of the Tomb of the Unknown Soldier includes this inscription: “Here rests in honored glory an American soldier known but to God.”