More than 70% of the canons on the code of canon law were changed by the reform, with only 17 articles remaining untouched. The punishments are “applied with canonical equity and having in mind the restoration of justice, the reform of the offender, and the repair of scandal,” the document reads.

If a cleric is found guilty of sexually abusing a minor, canon law will require that he be stripped of his office and, if necessary, defrocked. According to current church legislation, put in place by St. John Paul II in 1983, bishops were allowed more discretion in applying canon law, resulting in a patchwork accountability system.

The new rule also applies to clerics who share child pornography with minors or vulnerable persons. Laypeople and nuns will also be punishable for committing sexual abuse.

The new laws will go into effect Dec. 8.

Archbishop Filippo Iannone, president of the Pontifical Council for Legislative Texts, said at a news conference Tuesday that the strengthening of canon law on sexual abuse came in response to the “excessive laxity in the application of penal law” in the church.

But Bishop Juan Ignacio Arrieta, secretary of the Pontifical Council for Legislative Texts, refused to characterize the new norms as tightening laws against sex abuse crimes in the church, saying that the reform is “simply aimed at rendering operative a system that was previously clogged and didn’t work.” 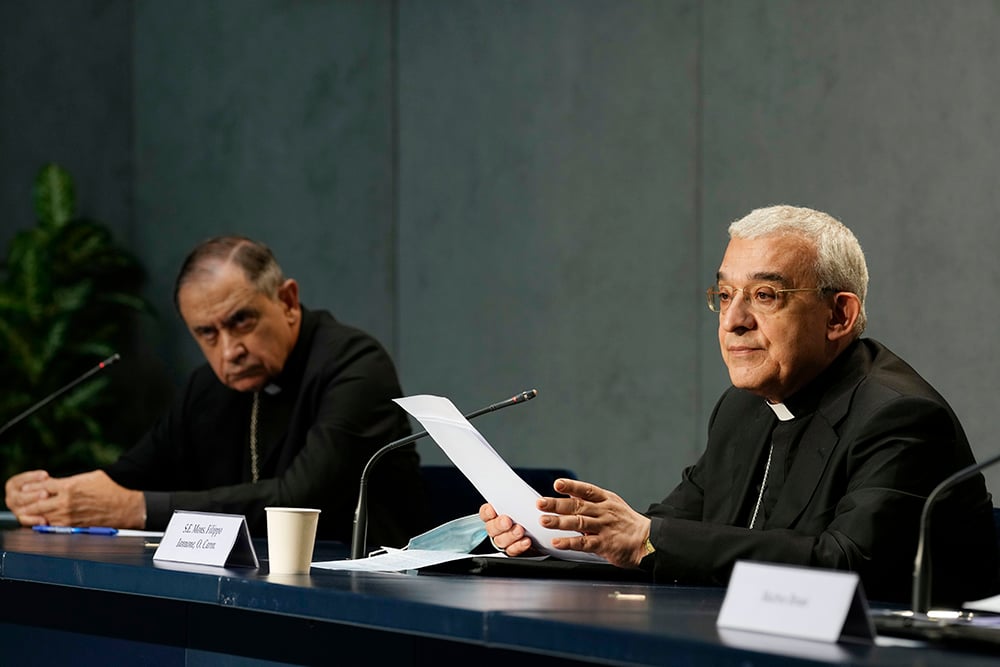 Archbishop Filippo Iannone, right, and Bishop Juan Ignacio Arrieta hold a press conference to illustrate changes in the Church’s Canon law, at the Vatican, Tuesday, June 1, 2021. Pope Francis has changed church law to explicitly criminalize the sexual abuse of adults by priests who abuse their authority and to say that laypeople who hold church office can be sanctioned for similar sex crimes. (AP Photo/Andrew Medichini)

Under the new code, a person who attempts to confer a sacred order on a woman, including priestly ordination or the diaconate, will be automatically excommunicated, as will be the woman.

The new laws on sexual abuse reflect the cultural change that decades of scandal have effected. “In the past, much damage has been caused by the Church’s failure to perceive the intimate relationship between the exercise of charity and recourse — when circumstances and justice require it — to the discipline of punishment,” Francis wrote in his Apostolic Constitution, “Pascite Gregem Dei” (“Tend the Flock of God”), which introduced the changes to canon law and was signed on the Feast of Pentecost (May 23).

The document resulted from consultations with dioceses worldwide as well as canon law experts that began under Pope Benedict XVI in 2007.

RELATED: US bishops try to rein in the Biden administration, but the Vatican is all smiles

Since becoming pope, Francis has pushed new laws and regulations promoting a “zero tolerance” policy and eliminated a privilege known as pontifical secrecy for sexual abuse cases. The newly revised document places punishments for the sexual abuse of minors, people with disabilities or vulnerable persons under a section titled “offenses against human life, dignity and liberty.”

The changes to the laws about women’s ordination came as more of a surprise, as the pope established a committee to explore the possibility of allowing women to become deacons in 2016.

This reversed a trend set in 2008, when the Vatican’s Congregation for the Doctrine of the Faith issued a decree stating that any bishop attempting to ordain a woman would incur automatic excommunication. In 2010 Pope Benedict XVI deemed the attempt to ordain a woman a “grave crime.”

Proponents of female ordination have interpreted this latest reform as a final blow to their cause.

Stricter punishments for financial malfeasance were expected after reports of a $200 million investment in real estate in downtown London using funds derived from Peter’s Pence, a fund destined for the pope’s charitable works.

Any ordained person or member of a religious order who “commits an offense in a financial matter” will face a new array of penalties. Offenders will be forced to reside in a determined space, have to pay a fine or be banned from exercising any public office or ministry.

But despite the involvement of several prominent Italian businessmen in the controversial real estate deals, no sizable penalty for financial malpractice is laid out for laypeople in the new laws.

“There are more options for sanctioning religious,” Arrieta said, adding that while every baptized person falls under the jurisdiction of canon law, the situation is more complicated for laypeople.