(RNS) — Every January, the city of New York hosts an interfaith breakfast that gathers my fellow New Yorkers who work to improve the lives of people in the five boroughs of NYC and beyond.

Gathered under one roof for several hours are representatives of the many different faiths that can be found in our city: Muslims, Jews, Sikhs, Buddhists, Jains and so many others assemble, not only to celebrate our diversity but to address pressing social justice issues, including racial equity, systematic racism and racially biased policing.

Interfaith coalitions have long taken up racial justice causes, most famously in the civil rights movements of the ’60s, and New York’s is one of literally hundreds of similar gatherings I have attended in my life as a Black Christian minister.

Yet, interfaith organizations themselves have often not taken racial equity work seriously. Some of the great interfaith organizations of the early 20th century, such as the National Conference of Christians and Jews (NCCJ), have either actively discouraged the participation of Black leaders or passively signaled their disinterest by ignoring the struggle for racial justice that their Black and brown neighbors and their religious leaders were facing.

This is despite the interfaith mingling that is woven into the history of Black people in America in traditional African religious traditions, Islam and Christianity as well as other faiths such as Judaism, Hinduism and Buddhism. The National Museum of African American History and Culture in Washington, D.C., has more than 1,000 religious artifacts that demonstrate the breadth of faith expressions among Black people since the first enslaved people from Africa brought their Muslim faith to this country.

One of the most revealing and important interfaith conversations in our history happened when two Black civil rights leaders, the Christian pastor Martin Luther King Jr. and the Muslim leader Malcom X, talked to each other. Interfaith engagement is better served when the rich and inspiring Black interfaith history in America is acknowledged and embraced.

From the beginning of my ministry nearly 40 years ago, I have been simultaneously committed to working for racial justice and for interfaith understanding. I have been heartened by the similar commitment of so many faith organizations who have renewed their focus on racial justice over this past year after the murder of George Floyd.

Over the coming year, the Interfaith Youth Core’s Black Interfaith project will sponsor symposiums and produce original work that tells the interfaith story from the perspective of Black Americans from a variety of religious traditions, as well as no religion.

We are living in a time of terrible division and distrust. Black Americans, and too many others, continue to suffer from systematic and life-threatening inequality. I hope to work alongside Black and Brown faith leaders from all different religious backgrounds who are putting racial equity explicitly at the center of our work.

I also hope to work to ensure that Black people, and Black people’s concerns, are at the center of the broader interfaith movement. My sincere belief is that when we incorporate racial equity into interfaith conversations as a common practice, we will build stronger coalitions and achieve a nation that treats people of all religious and race backgrounds with equity and respect.

(The Rev. Frederick A. Davie is the senior adviser for racial equity at Interfaith Youth Core and senior strategic adviser to the president of Union Theological Seminary. The views expressed in this commentary do not necessarily reflect those of Religion News Service.) 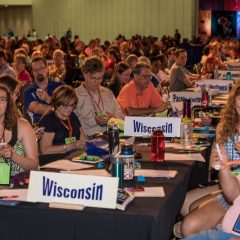 News
As United Church of Christ takes on race and LGBTQ issues, consensus reigns
Follow us on Facebook!
Submit your photos to RNS