(RNS) — The opening day of the American Catholic bishops’ spring meeting on Wednesday (June 16) had nothing on the agenda about the controversial topic of Communion and President Joe Biden. The meeting’s first-day sessions were supposed to be dedicated to the mundane business of nurturing Catholic families and discussing drafts of liturgical language.

But shortly after U.S. Conference of Catholic Bishops President Jose Gomez, the archbishop of Los Angeles, opened the floor — the virtual floor, as the meeting is being conducted remotely — for discussion of the meeting’s agenda, the first bishop to speak took the opportunity to rail against Biden and his abortion policies.

“I ask that we take time to discuss these terrible abortion issues of our president, and develop a plan or a strategy to counteract them,” said Michael Pfeifer, a retired bishop from San Angelo, Texas. He argued Biden’s policies amount to “infanticide” and referred to the “issue of our Catholic president receiving Holy Communion.”

In recent months, a group of conservative-leaning bishops that includes Archbishop Joseph Naumann of Kansas City, Kansas, and Archbishop Salvatore Cordileone of San Francisco has publicly suggested that Catholics who back abortion rights should either not present themselves for the Eucharist or be denied the sacrament by clergy.

It was unclear how much time the bishops, who generally prefer to disagree in private, would choose to spend talking about Communion at the spring meeting. The clerics are slated to debate the drafting of a document regarding the Eucharist this week, which could touch on the issue of denying Communion politicians. 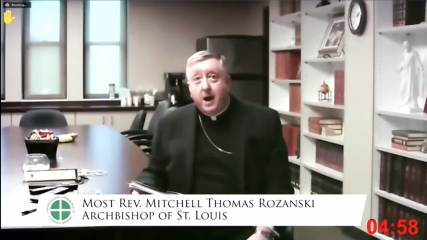 The question of time, however, quickly became a point of contention during a nearly hourlong debate.

After USCCB leaders noted that Pfeifer, as a retired bishop, was technically disallowed from making a proposal at the meeting, Archbishop Mitchell T. Rozanski of St. Louis returned to the question, albeit indirectly: He proposed that during Thursday’s planned discussion of the creation of a document on “Eucharistic coherence,” there be no time limits on speakers.

Naumann spoke out against Rozanski’s proposal, saying, “I think this is a delaying tactic that will make it impossible to get this document to be voted upon in a timely manner.”

But Bishop John Stowe of Kentucky, who was one of nearly 70 bishops who reportedly signed a letter last month asking Gomez to delay the Communion debate, threw his support behind Rozanski’s motion — complete with a sharp rejoinder to Naumann.

“Rather than seeing this as a delaying tactic, it seems that some of the brother bishops want to rush this discussion and to focus the emphasis — on a teaching document on the Eucharist — about whether our Catholic president is able to receive Communion,” he said. “At the very minimum, I think we need to be able to hear every bishop on this issue … and take our time with something that is so important.” 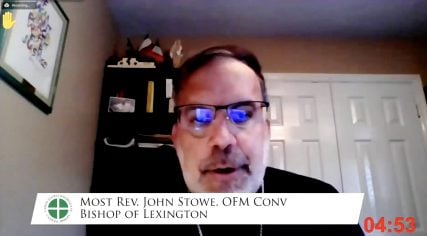 When Gomez cut debate short and called a vote, Rozanski’s proposal to give bishops unlimited time failed, with 59% opposed.

But if the conservative bishops got a short-term win, some observers called the margin of victory an ominous sign for their long-term goals.

“It is unusual for a motion to change the agenda to generate so much debate and to receive 40% support,” said John Carr, co-director of the Initiative on Catholic Social Thought and Public Life at Georgetown University, and a former USCCB staffer, in an email. “This suggests the final document could have major trouble getting 2/3rds support of the bishops and ultimate approval of the Vatican because of the intense divisions over this proposal.”

Had the bishops themselves not raised Communion on day one, the Vatican’s ambassador to the USCCB, Apostolic Nuncio Archbishop Christophe Pierre, was already intent on doing so. In a lengthy prerecorded address, Pierre praised the importance of dialogue, noting that “the goal of dialogue should be unity and not merely doctrinal and juridical unity.”

He then cast doubt on the idea that Catholicism should be reserved for those who practice the faith purely, characterizing the church as “not a church of the perfect but a pilgrim church in need of the mercy offered generously by Christ.”

Addressing Communion, Pierre articulated an inclusive vision for the sacrament. “The starting point, therefore, cannot be to shame the weak but to propose the one who can strengthen us to overcome our weaknesses, especially through the sacraments of reconciliation and the Eucharist,” he said. “With respect to the latter, Holy Communion is not merely a ‘thing’ to be received but Christ himself, a person to be encountered.”

Not to be outdone, Gomez mentioned Communion in his own presidential address, saying, “The church’s unity is made real and visible in the Eucharist.”

He also warned of “forces” in culture that “threaten not only the unity of the human family, but also the very truth about God’s creation and human nature.”

At a news conference after the session, bishops were asked why the Eucharist document was being proposed now. Bishop Kevin Rhoades of Fort Wayne-South Bend, Indiana, noted that bishops have taken up the topic of Communion at other times, before explaining that the proposal is spurred by “convergence of things.”

He singled out a 2019 Pew Research survey that found most Catholics do not believe basic Catholic teachings about Communion.

“We want to talk about the whole truth about the Eucharist,” he said. “How can you do so without talking about the importance of living what we receive, and being in communion with the faith of the church? That’s Eucharistic consistency.”

He also insisted the impetus for the document is “not focused on just President Biden,” adding, “This is for all Catholics, and we’re all called to live the Eucharist that we receive and to live in communion with the teachings of the church.” 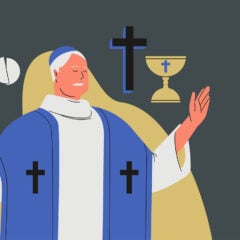