(RNS) — As the search for missing people trapped in the rubble of a Surfside, Florida, condo building continued, the town’s large Jewish community buried its first victims Monday (June 28) and Tuesday.

Leon Oliwkowicz, 81, and his wife, Christina Beatriz Elvira Oliwkowicz, 74, were among the first apartment dwellers identified after the 13-story Champlain Towers South collapsed in the middle of the night last Thursday.

The couple immigrated to the United States from Venezuela and were members of the large Orthodox synagogue in Surfside known as The Shul of Bal Harbour. The couple were known for their generosity and once donated a Torah scroll to an Orthodox Jewish high school in Chicago.

Stacie Fang, 54, was buried in New York City, on Tuesday in a private Jewish funeral. Her 15-year-old son, Jonah Handler, was dramatically rescued from the rubble on Thursday. Fang died of her injuries at Aventura Hospital and Medical Center shortly after the collapse.

More than 150 people were considered unaccounted for as the rescue mission continued into its sixth day. Eleven people have been confirmed dead. Over the weekend, a rescue team from the Israel Defense Forces arrived to help with recovery. Another Israeli rescue group is sending a team from its psychotrauma unit.

Surfside is a diverse community of many faiths, but the town has a large Jewish presence. At least 50 of the total trapped in the collapse of the Champlain condo are likely Jewish, according to various lists that have been collected among Miami Jewish organizations.

Much of the Jewish life in Surfside is centered on The Shul. The thriving Chabad congregation — its name comes from the Yiddish for “synagogue” — takes up nearly a block of Collins Avenue, and many businesses, schools and restaurants catering to the Jewish community have grown up around it.

While The Shul has about 700 member families, many other Jews have ties to the congregation, even if they attend services elsewhere, said Motti Seligson, a spokesperson for the Chabad Lubavitch movement headquartered in New York City. They may send their kids to preschool or camp through the synagogue or attend adult education classes there.

Ira M. Sheskin, a professor of geography at the University of Miami who published a demographic study of the larger Miami Jewish community in 2014, said the Surfside ZIP code — 33154 — is about one-third Jewish, consisting of some 1,500 households or 5,000 people.

Within the Surfside Jewish community, more than a third are Orthodox (34%) and most of those belong to Chabad, a subset of the Hasidic Jewish movement whose adherents lead a pious, strictly Orthodox lifestyle that prizes family and children. By contrast, just 9% of U.S. Jews are Orthodox.

About a third of the Jewish community in the Surfside area — much like the Oliwkowicz couple — are Hispanic Jews, meaning they emigrated from a Spanish-speaking country in Latin or South America.

The larger Miami Jewish community has about 85 synagogues, Sheskin said, making it one of the cities with the largest Jewish populations in the U.S. 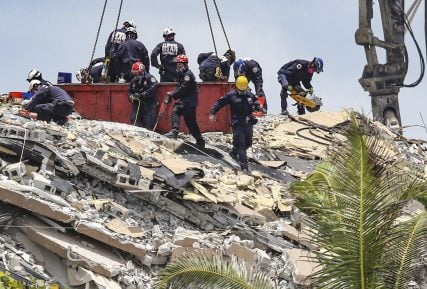 Jacobs and dozens of other clergy are taking shifts at the reunification center located within the Grand Beach Hotel in Surfside, where families gather, still hoping to hear of loved ones found alive in the debris.

The arduous task of finding remains compounds the anxiety and grief of those longing to fulfill the Jewish tradition that burial should take place within one day of a death. Jewish tradition also requires that all bodily remains be buried.

Jacobs said she has wandered the halls of the reunification center, stopping to talk to anyone there who may need spiritual support. Many have been non-Jewish.

RELATED: Why Israel got to Surfside so fast