AMMAN, Jordan (RNS) — Jordanians are debating the possibility of opening the Sunni Islam-majority country to Shiite pilgrims long discouraged from visiting the tombs of the relatives of the Prophet Muhammad, most prominently Jafar, Muhammad’s cousin and the brother of Caliph Ali, the first Shiite leader.

The debate was triggered by a Facebook post by Zaid O. Nabulsi, a Jordanian lawyer and prominent pro-democracy advocate, who responded to a visit by Jordan’s King Abdullah II in early July to one of the holy sites before heading to Baghdad for a summit with leaders from Egypt and Shiite-majority Iraq.

Nabulsi said Jordan, and especially the southern part of the country where the Shiite tombs are, has suffered economically from the Middle East’s constant turmoil. “Today we need every penny we can muster to avoid financial collapse. In these dire circumstances, we simply cannot afford to be selective about the tourists we attract to the impoverished southern cities where most of the holy shrines exist,” he wrote.

Nabulsi, who has been selected by Abdullah to sit on a political reform committee, observed that faith-based tourism has been the bedrock of Jordanian tourism and said there was no reason to deny Shiite Muslims, who number some 320 million globally, with large populations in a swath around Jordan extending from neighboring Lebanon and Iraq to Saudi Arabia and Bahrain. Some experts expect that a million Shiite pilgrims could visit Jordan annually.

“A mature and confident country that has just celebrated its 100th anniversary should never be afraid of peaceful tourists, whether they come to visit the baptism site of Jesus Christ or the mausoleums of Prophet Muhammad’s closest family, especially that HM King Abdullah is the direct descendant of that same family.”

“We receive Israeli tourists so why not Shia?” asked one supporter on Nabulsi’s Facebook page. 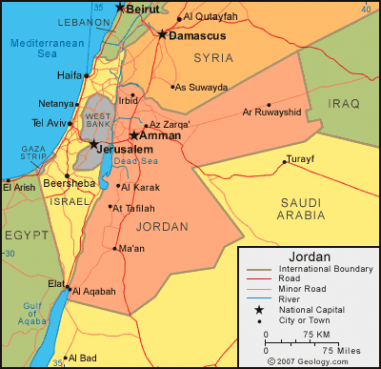 But Jordan has a complicated relationship with Shiism. Despite occasional gestures toward pluralism, the government has refused to allow Shiite mosques to be built for the country’s tiny Shiite community. There are political reasons as well as religious ones for the resistance: Shiism is the dominant sect of Islam in Iran, which is influential in Jordan’s neighbor Lebanon through its sponsorship of the Islamist group Hezbollah. Bolstering a Shiite presence in Jordan would provide Iran a toehold inside Jordan’s borders.

“Since 1979 the Iranians have gone out of their way to export their brand of Islam,” said one person responding to Nabulsi’s post. “If allowed, this will lead to Shia conversions and an attempt to get the poor and needy to become Shia, and, what is more, allow in a dangerous ideology.”

Jordanian tourism ministry officials and the royal court both denied that there was any change in policy. “We don’t have a position against any tourist visiting Jordan from anywhere in the world, but this kind of religious tourism is not our priority,” Nayef al Fayez, the minister of tourism, told Religion News Service.

While technically true, the statement minimizes Jordan’s attitude toward tour groups from countries with significant Shiite populations, including other non-Arab states such as Pakistan and Afghanistan.

If visits by Shiite Muslims haven’t been easy, Nabulsi points to anti-Iran Arab nationalists and ultra-extremist Sunnis. “The source of the objection to Shiite tourists is imbedded in Wahhabi doctrine prevalent amongst large sectors of Jordanian society,” Nabulsi said.

“But today, even Saudi Arabia itself has begun to rid itself of Wahhabism and make peace gestures towards Iran, and if we don’t follow suit, we are on the trajectory of becoming the new ‘Wahhabistan.’”

With the Vienna nuclear talks between Iran and the U.S. about to conclude, he added, a new, more open geopolitical reality may be about to emerge in the region.

“We just cannot be the last person to board this speeding train,” Nabulsi said.