(RNS) — In January, my brother Omid went to the immigration office in Doha, Qatar, to check on a routine renewal of his residency permit. He was in for a shock. Born in Qatar nearly 60 years ago and raised there, he is essentially Qatari in his culture, language and friendships. Of course, under Qatar’s strict “right by blood” citizenship laws, Omid will never hold a Qatari passport. But the long-running cooperative attitude of the Qatari authorities made his status workable, if not ideal. That is, until the immigration office told him he had been blacklisted and would have to leave the country for good. When he inquired about the reason, he was told he was not entitled to know.

Sadly, he and I both know why this is happening. Omid, like me, is a Baha’i.

The Baha’i faith is a religion founded in Iran in 1844 that believes in the basic validity of all the world’s great religions, as well as principles such as the oneness of humankind, the compatibility of scientific and religious truth, and the equality of women and men. 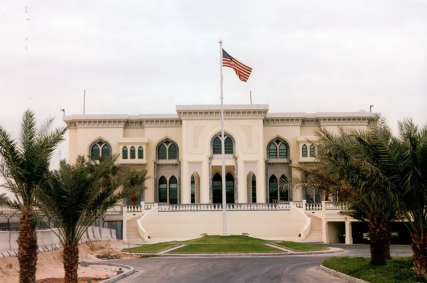 The U.S. Embassy in Doha, Qatar. Photo courtesy of the National Museum of American Diplomacy

For believing in a religion that came after Islam, Baha’is have been chronically persecuted in Iran, and more recently, Yemen. But our problems in Qatar are new. Omid’s arbitrary expulsion will follow that of dozens of Baha’is in recent years. We’re beginning to note, with an increasing sense of alarm, a pattern emerging. If it persists, it will endanger the viability of an already diminished Baha’i community in Qatar.

What happened to Omid also happened to me. In 2005, though gainfully employed and in receipt only weeks earlier of my security clearance to work in Qatar, I received a notice of deportation. I was lucky in that my new employer was the U.S. Embassy. It advocated on my behalf and when that was unsuccessful, it arranged my departure to the United States instead of Iran, my then country of citizenship, which would have subjected me to persecution as a Baha’i.

In Qatar, the vast majority of the workforce consists of foreign workers. The end of an employment contract and the breaking of laws are all normal reasons to be required to leave the country. The deportation cases of the Baha’is are different. Most were born in Qatar. None involved violations of Qatari law or customs, and all involved people who were gainfully employed or running businesses with Qatari sponsors, as required by local law. The Baha’is who were deported came from different professions and quite a range of nationalities, from Jordanian to British, American, Malaysian, Indian and Canadian. The only common thread that ran through these people was their Baha’i faith.

Whatever the cause, anti-Baha’i momentum is building and has resulted in a dismissiveness toward Baha’is and their families which would have been unthinkable in the past. It is no small matter to rip people from the only home they have ever known. It took me years to reconcile myself to the fact I would likely never see my family home again, my father’s resting place, my elementary school and the hospital in which I was born.

This subtle erasure of Baha’is from the country contrasts sharply with Qatar’s efforts to promote the image and practice of tolerance through its Doha International Centre for Interfaith Dialogue. Whether the expulsion program is coming from the top of the government or from within its bureaucracy is unclear. However, with appeals made by U.N. special rapporteurs in 2019 and a public statement by the Baha’i International Community at the March 2021 session of the U.N. Human Rights Council, the problem is certainly now well known to the authorities. Yet, nothing has changed. Despite a government response to the special rapporteurs, asserting Qatari laws prevent the government from discriminating on the basis of religion, the deportations of Baha’is continue and the reasons for targeting remain undisclosed.

Coverage of human rights matters regarding Qatar have centered on the 2022 World Cup, which was awarded to Qatar in December 2010. Even national teams, such as those of Norway and Germany, have voiced concerns about how migrant workers in Qatar are treated. Though a different matter, that issue too shows that despite the government’s stated good intentions, it has not yet proved itself able to protect all who live within its borders.

As an international community, we take issue with the eradication of religious or other minorities from their homes and with the diminishment of pluralism and diversity, whether in the Middle East or other regions. This subtle robbing of religious diversity in an increasingly connected and modern Qatar should concern us all.

My father arrived in Qatar in the early 1950s and was welcomed as the country struggled to find skilled individuals willing to work in what was then a country consisting of little more than a few villages. He, like many other foreign workers, helped the government build a modern Qatar.

Fifteen years since I was forced to leave Qatar, I still miss the warmth and hospitality of the people whom I consider my own. The fate of the Baha’is who remain there, along with all the other foreign workers who give life to Qatar, remains an open question. I would love to see a successful World Cup in Qatar this November, but, even more, I would love to see my home remember how much its well-being depends on those who do not hold a Qatari passport.

(Baher Seioshansian, an engineer by training, was born and raised in Qatar. A Baha’i of Iranian ancestry, he was unexpectedly and arbitrarily forced to leave Qatar and his position at the U.S. Embassy by the Qatari authorities. He now resides in the state of Maryland.The views expressed in this commentary do not necessarily reflect those of Religion News Service.) 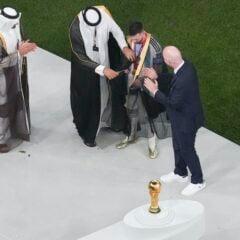 Religion Hub
Lionel Messi’s black cloak: a brief history of the bisht, given to the superstar after his World Cup triumph

News
Qatar offers World Cup visitors an introduction to Islam
Follow us on Facebook!
Submit your photos to RNS