(RNS) — A century ago, marginalized Americans seeking to be assimilated into the country’s “melting pot” gravitated to an Asian game of chance that one Chinese critic considered to be as morally dangerous as footbinding and opium.

Today, a new book on mahjong and its cultural journey in the U.S. suggests that there is much to learn from the game’s history, particularly how to put the rising anti-Asian and anti-Jewish hatred of our time in context.

Mahjong was born in mid- to late-19th-century Chinese gambling houses, where men clacked its game tiles, bearing stones, flowers, dragons and other images, while attended by courtesans. In the 1920s, Indiana native Joseph Park Babcock, a Standard Oil representative in China, brought it back to the American West Coast, tacking 2,500 years onto its history to paint it as a wholesome pastime with ancient Confucian origins.

“It’s one of the most enduring myths about the game,” said Annelise Heinz, author of “Mahjong: A Chinese Game and the Making of Modern American Culture.”

With their inimitable clack, mahjong tiles spread in the U.S. thanks to Babcock’s marketing, not only overcoming the xenophobia, particularly Sinophobia, that was common in the country at the time, but also creating opportunities for both Asian American immigrants and their Jewish American counterparts.

“It’s a persistent question that faces marginalized groups: How do you turn a double-edged sword, hoping for one edge of that blade?” said Heinz, a University of Oregon historian. “It’s a risk you’re confronted with, because you don’t often have a lot of other options.”

Mahjong answered that conundrum for both groups. Americans embraced an idealized Chinese past while holding onto their ambivalence about contemporary China. Jewish Americans, often living cheek by jowl in American cities with Chinese compatriots, were able to “triangulate” through mahjong, according to Heinz.

The Americanized version of mahjong afforded Jewish Americans — and women in particular — “careful entry into the mainstream while still maintaining group distinctiveness by using a third reference point, China, to remain both outside and inside ‘domestic’ American culture,” Heinz writes in the book.

As interest in mahjong waned somewhat in the 1930s, Jews continued to play, and the game became associated increasingly with the Jewish community — and with Jewish women in particular.

In the early 1920s, when President Warren G. Harding and First Lady Florence played, mahjong was Shanghai’s sixth-largest U.S. export. The Revenue Act of 1924 levied a 10% tax on “Mah-jongg, pung chow, and similar tile sets, and the component parts thereof.”

The Manhattan-based National Mah Jongg League was so successful selling cards with standardized American rules for the game — still used today — that already philanthropically minded Jewish members turned the game into a force for good. 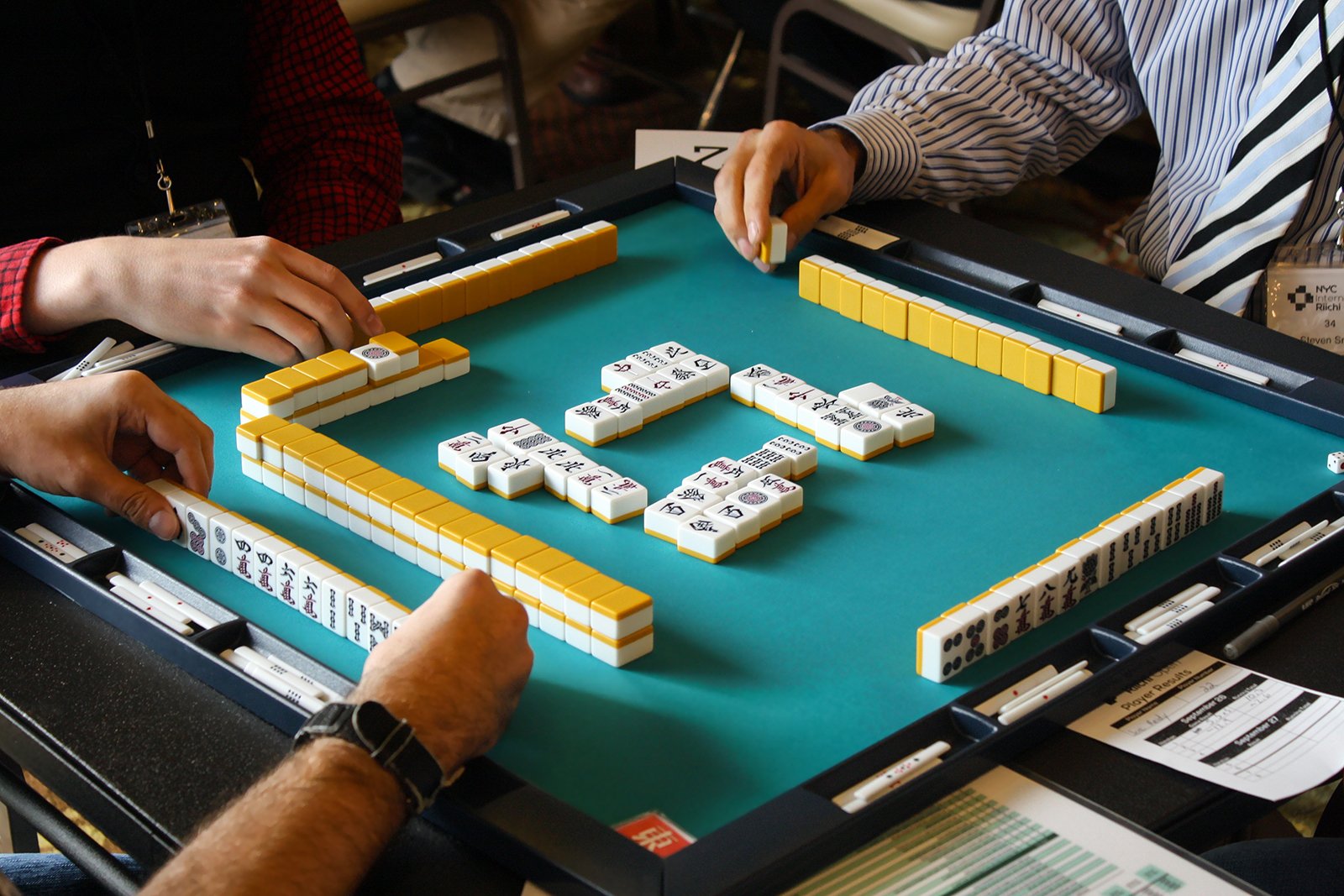 People play a game of mahjong. Image by LazarCatt/Pixabay/Creative Commons

“The game becomes a tool for raising money. It takes its patina away from gambling and points it toward philanthropy,” said Melissa Martens Yaverbaum, executive director of the Council of American Jewish Museums, who curated a 2010-11 Museum of Jewish Heritage exhibit “Project Mah Jongg,” which traveled to Jewish museums in Oregon, Ohio, California, Florida, Georgia, Maryland and Wisconsin.

The game spread among “snowbird” Jews in Florida retirement communities and those who vacationed in the “Borscht Belt” of the Catskill Mountains in upstate New York. “Mahjong became a way of life in Jewish resort culture and retirement culture,” Martens Yaverbaum said.

Researching the book — including during a year she lived in China, where she saw mahjong’s ubiquity — Heinz saw religion as integral to its history. In the U.S., a “pretty consistent minority” of Italian Catholics played alongside Jewish neighbors, she said.

Paradoxically, perhaps, faith leaders preached against it on both sides of the Pacific. In China, Christian missionaries condemned the game’s proximity to gambling, while U.S. preachers found it doubly noxious for its Chinese flavor. The missionary Watts O. Pye wrote in 1924 of Chinese Christians’ confusion over “the participation of Western Christians in Mah Jongg,” and leadership at what was then called Canton Christian College asked faculty to avoid playing. Beijing’s YMCA, meanwhile, banned it.

As the game became associated with women who enjoyed increased purchasing power and leisure time, some accused mahjong-playing moms of neglecting their children even as the game afforded young women part-time work as mahjong instructors.

“It meshed with the making of modern American culture in the 20th century,” Heinz said.

In marketing mahjong as a “new-old” game, white Americans and Europeans, including Babcock, reinforced longstanding “Orientalist” associations with China, whose esteemed past they differentiated from its present (which they equally stereotyped, according to Heinz).

Heinz hopes her book can help improve understanding of and empathy with Asian Americans, who have long been seen as “perpetually foreign” and “inherently unassimilable,” she said. “We see that in the constant rejection of, ‘Where are you really from?’ ‘Go back home.’”

The most recent attacks against Asian Americans in Atlanta targeted women, which Heinz said is part of a long history of intertwined racism and misogyny. “The racialization of Asian people in the United States rests so strongly on gendered stereotypes,” she said.

Mahjong’s appeal has not been tainted by sensitivities about cultural appropriation, and Heinz deliberately avoids referring to the idea. She thinks “appropriation” has become “kind of radioactive and simplistic in a way that can evoke a sense of cultural policing, or a zero-sum game.” It would be unfortunate, she said, if only descendants of the game’s originators could play.

She also thinks mahjong’s history can speak to those grappling today with how to approach America’s racist past. “What does it mean if something we know and love and has evolved in various ways also is embedded in a racist set of marketing strategies?” she said.

Engaging with people with other backgrounds better equips everyone to be able to learn and “course-correct” as needed, she said. Mahjong’s legacy, which many inherited uncritically a century ago, can be received differently today.