“There are so many people within the deconstruction TikTok community that are way more well-versed and so intelligent, so I have a lot to learn from them,” ToryBae said.

She said she sees a lot of processing trauma in both deconstruction and adoption TikTok. “I believe adoption is trauma because it starts with a loss,” she said.

Originally from South Korea and adopted when she was three months old, ToryBae grew up in Minnesota, as did her husband. They’ve been living in North Carolina for the better part of the decade and are licensed foster parents. They currently foster a pair of siblings.

Adoption TikTok, she says, feels more fragile, because her experience is raw. Negative comments cut deeper. “They’ll try and gaslight or invalidate your own lived experiences, and that takes more of an emotional toll because it’s so personal,” she said.

But she said comments that attack her beliefs don’t faze her. “I can handle Christians coming down and saying you’re going to hell,” she said.

“I’m just so grounded in my faith,” she added. “I know it’s unwavering, because I know it’s always changing. It’s always malleable.”

Go to next profile: ‘The last time we had a communication shift this drastic was the printing press and that gave us the Protestant Reformation’ —@cfc_pastorjeff 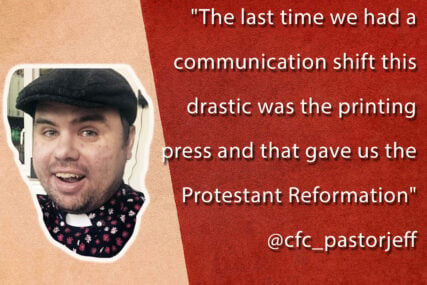 One Eye Squinted
With this much rot, there’s no choice but to deconstruct