(RNS) — Gurpreet Singh died with his boots on for a Marine Corps that wouldn’t let him wear a turban in accommodation of his Sikh faith. Singh was killed in action in Afghanistan in 2011, one of the 2,312 American military personnel who have perished in that conflict.

On Thursday (July 29), a solemn memorial ceremony in Arlington National Cemetery recognized Cpl. Singh, who, after a long process, has become the second Sikh soldier buried in that hallowed ground — a khanda sword symbol etched on his tombstone.

“Gurpreet loved his country and his sacrifice is an inspiration to many young Sikh men and women to pursue service careers,“ said Guldeep Kaur, who is Sikh and a petty officer with the Navy. Kaur said she personally escorted Singh’s parents — while in her uniform — to Washington, D.C., for the ceremony.

The ceremony brings to the fore again the unequal religious accommodations extended to Sikhs across the military.

According to the advocacy group Sikh American Veterans Alliance, there are roughly 100 Sikhs serving in America’s armed forces, many of whom still must serve — like Singh — without wearing beards or the dastar (turban), both of which are articles of their faith.

Kamal Kalsi became the first Sikh American soldier to receive a uniform accommodation in 2009 for the U.S. Army, which allowed him to continue to serve while wearing a dastar and keeping his beard. It is a religious imperative for Sikhs to not cut their hair. During the First World War, a ban on beards was put into effect over concerns beards could interfere with the seal of a gas mask. Coincidentally, the conflict was also the first in which an observant Sikh American participated.

For a brief period from 1970 until the mid-1980s, beards were again allowed for U.S. service personnel. The U.S. Army issued new guidelines in 2017 allowing for religious accommodations that recognized the needs of Sikhs and other soldiers who have a religious obligation to wear a beard. 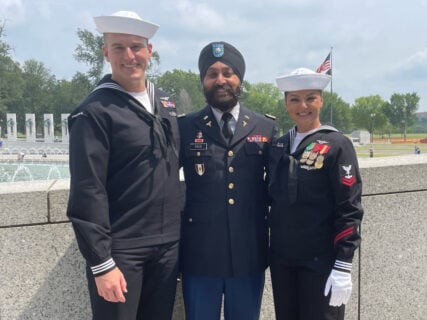 From left, A02 Joe Probasco, LTC Kamal S. Kalsi and A02 Guldeep Kaur stand for a photo near the National World War II Memorial in Washington, D.C. Kalsi is the first Sikh American soldier to have been given a uniform accommodation allowing a beard and dastar, both observed as requirements for Sikh followers. Photo courtesy of Sikh Americans Veterans Alliance

The Air Force followed suit with similar regulations in 2020 for airmen. However, the Navy, Marines, Coast Guard and Space Force have yet to make religious accommodations for Sikh servicemen. Most state forces follow the guidelines set by the national service branch.

“Singh’s legacy and that of other Sikh servicemen have inspired other Sikh-Americans to join the military,” said Kalsi, who now heads the Sikh American Veterans Alliance. “I spoke to a young high school graduate who joined the Marines recently and was told from the beginning that he would have to cut his hair and shave his beard if he wanted to be a U.S. Marine.”

Sikhs have a long martial heritage, including in the United Kingdom, where there is a history of practicing Sikhs serving in the armed forces, dating to the era when the colonial British Raj controlled much of South Asia. As part of the British military thousands of Sikhs fought alongside American units in World War II, notably during the Italian campaign.

Though Sikh units were disbanded after India’s independence, some Sikh groups have advocated for the return of Sikh units in the British military. They argue such units could help boost morale and help Sikhs avoid discrimination in other units. The idea has support across the British political spectrum, from members of the conservative UK Independence Party to figures in the Labour Party such as Tanmanjeet Singh Dhesi, a Sikh member of Parliament. Prince Charles, the heir apparent to the British throne, has openly advocated for a Sikh regiment despite the normal political quietism of the monarchy.

Other Commonwealth countries such as Australia and Canada have long allowed Sikhs to serve in their armed forces. Canada’s minister of defense, Harjit Sajjan, is both an Afghanistan veteran and a practicing Sikh. American forces often fought alongside Commonwealth forces in the recent campaigns in Iraq and Afghanistan.

“Allowing Sikhs to serve in our armed forces increased the cultural competency of our military and our strategic depth. It also ensures the military better reflects the diversity of the American people they serve,” said Kalsi.

Even so, some military planners continue to express concern about the ability of soldiers wearing a turban or with a beard to wear gas masks or various military helmets. Canada’s Sajjan manufactured and patented a gas mask for his personal use. Other items may be more difficult to redesign. The helmet of the F-35 joint strike fighter, for example, can cost as much as $400,000. Redesigning such technologies would come at a cost.

“This is an era of figuring out innovative solutions to our problems. If Elon Musk can make commercially viable electric cars and if (Jeff) Bezos can privatize the space race, then I am sure the government can figure out a reasonable way to solve any technical challenges posed by beards and turbans,” Kalsi said.