DELHI, India (RNS) — When the students fled her village school in 2011 to join Maoist rebels in the Central Indian state of Chhattisgarh, Soni Sori knew it would be yet another defining moment in a life marked by activism, tragedy and seemingly insurmountable odds.

But Sori was not there when her children fled. She was in jail.

For more than two decades, the Indigenous activist has mobilized against government policies that dispossess the marginalized. She’s spoken out against big corporations plundering the region’s forests, the police camps dotting the terrain, extrajudicial killings and the extractive mining practices affecting the health of thousands of people in the region.

And in 2008 she began working with a village school.

Moved by so much suffering, Sori wanted to provide education, food and shelter to orphaned children. She brought several dozen of them to her village and told them “they must never turn to weapons since the pen would be their protector.”

“I had rescued 50-odd children from the Salwa Judum,” said Sori, 47, referring to the state-sanctioned militia deployed during anti-insurgency operations in the Bastar district of Chhatisgarh. The undulating terrain of mineral-rich Bastar, where 40% of livelihoods are forest-based, is part of India’s Red Corridor and has experienced considerable Maoist insurgency.

The Salwa Judum “purification hunt” from 2005-2011 has been accused of human rights violations on an extraordinary scale. State-sponsoring of militias and deployment of child soldiers went on amid several accounts of rape and murder. Over 600 villages were burned and 300,000 people were forced to flee their homes and move into camps. 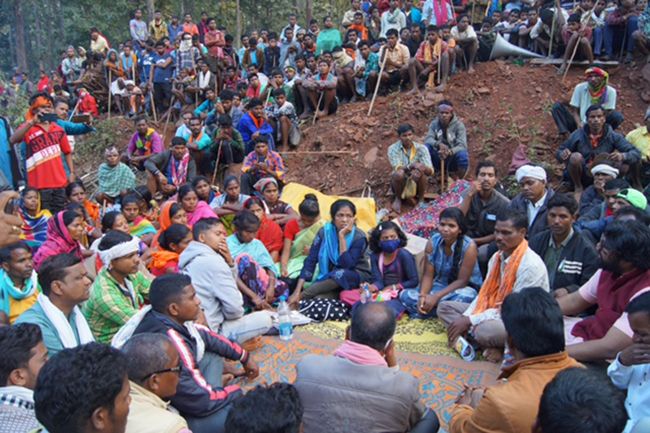 “The children were the worst sufferers,” recalled Sori, reclining on a chair in her minimalist apartment in the Dantewada district of Chhattisgarh, where she now lives. “They were witness to their homes being burnt, families tortured, police brutalities and other horrors.”

She said she was “committed to restoring their faith in humanity despite what they’d seen.”

But things changed when Sori was arrested and accused of being a Maoist in 2011.

Kept under trial for three years, she alleges she was sexually tortured in custody, threatened with retaliation against her family and pressured to stop her human rights work. In 2013, while Sori was in jail, her husband, who had been arrested on the charge of aiding Maoists in 2009, died. There were allegations from relatives and rights activists that his death was due to custodial torture. Prolonged incarceration ruptured Sori’s ties with the children at her school. Left to fend for themselves, the children joined the Maoists.

After her release from jail in 2014, now widowed and cut off from the former children of her school, she threw herself into fighting against the exploitation of women and advocating for the rights of tribes to health care and education.

“In jail I continued to organize campaigns for Indigenous people’s rights to their lands, water and forests in Chhattisgarh,” she said. “I thought, why should we be mute spectators and allow the state to clear the lands of our people in the name of anti-Maoist operations?” 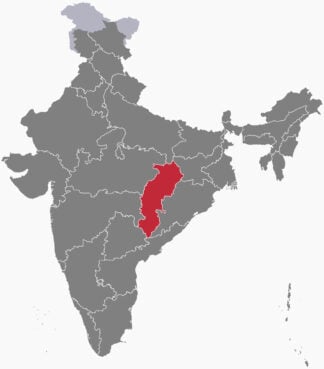 The state of Chhattisgarh, red, in central India. Map courtesy of Creative Commons

Sori said she learned about solidarity and common cause in jail. Sori, who belongs to the Koya tribal community of Chhattisgarh, also became determined to continue her fight to save the Indigenous people and not to succumb to shame.

“I was body-shamed, raped and assaulted, stones were stuffed in my genitals,” she said. “Yet I drew inspiration from the women in jail who had seen so much more.”

While the Koya have their own ethnic religion, they also worship a number of Hindu gods and goddesses and Sori said that in jail she drew inspiration from the Hindu goddess Kali, who is worshipped as a divine mother and supreme godhead in Hinduism. Often portrayed standing or dancing on her consort, the Hindu god Shiva, she’s considered a destroyer of evil forces.

“Goddess Kali lifted me up when I was broken and inspired me to continue my fight against demons that had broken our tribal ecosystem,” she said.

“Soni has been the most important voice against state repression,” said Degree Prasad Chauhan, a low-caste activist in Chhattisgarh. “Both Maoists and state actors have tried to discredit her work but she has shaken up the feudal structure of society.”

Like many other tribes in the region, the Koya are primarily farmers and over the past several decades have faced the twin threats of development and conflict, putting their livelihoods and cultural heritage at risk. Sori believed a strong voice was needed to protect the Indigenous people. 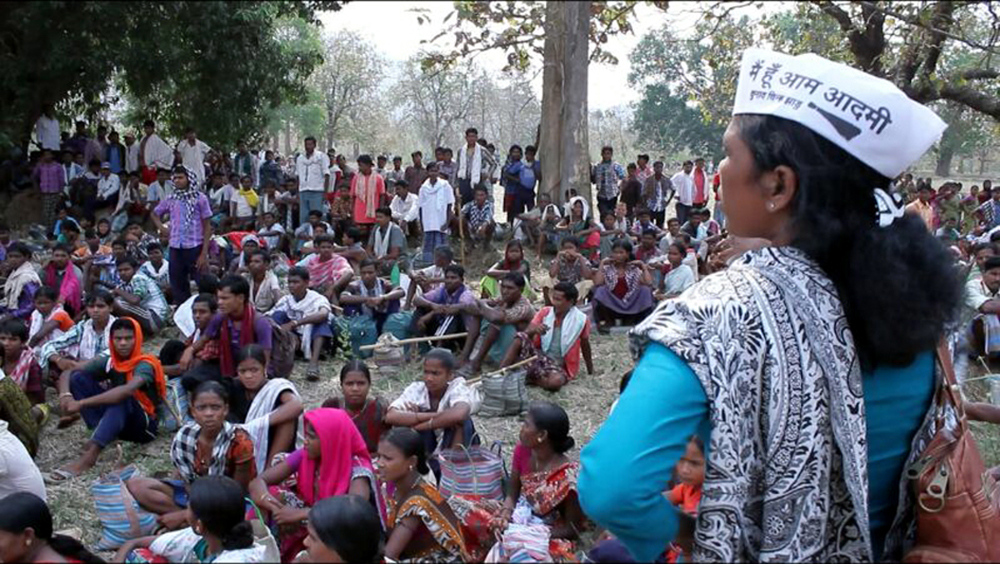 Activist Soni Sori, right, at a campaign to assert the rights of Indigenous people to land, forests and water in Bastar district, Chhattisgarh, India. Photo courtesy of Outlook India

After her release from jail, Sori joined a Delhi-based political party to carry out her grassroots work in her home state. She campaigned for better access to education and health care. For tribes that were ignorant about the country’s constitutional laws, she taught them how to invoke their rights, resist and unite in their struggles.

Sori was also a strident voice against sexual violence and injustices faced by Indigenous women at the hands of the local police and central government’s security forces.

In 2016, she was attacked by unidentified men who threw acid at her. They threatened her, demanding she stop her work against civilian killings and sexual violence in conflict zones. But even amid the ongoing threats, her work was being noticed. Ireland-based rights group Front Line Defenders recognized her struggles to achieve justice for tribal people with the Front Line Defenders Award in 2018.

“By then she had already received several accolades,” said Linga Kodopi, an activist who’s worked closely with Sori since 2009. “But with this global recognition of her revolutionary ideas and Gandhian sensibilities, her work took on a greater intensity.” 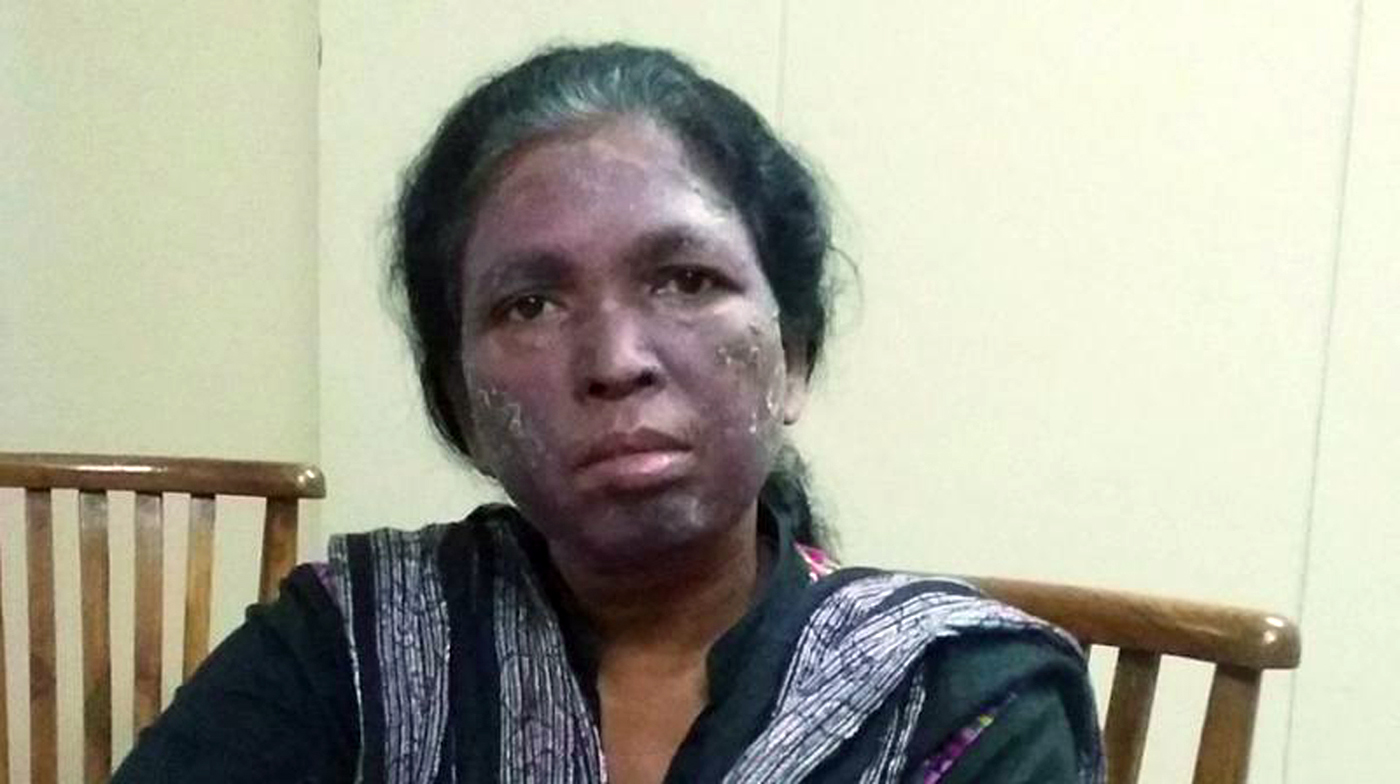 Soni Sori poses in 2016 after being attacked by unidentified men who threw acid at her because of her human rights work in Chhattisgarh, India. Photo courtesy of Outlook India

Sori says her days are filled with purpose. She travels to far-flung villages to understand the plight of forest dwellers and the rural poor. When families report rape or disappearances in extrajudicial killings, she rallies around them and organizes campaigns against police atrocities.

Not only is she proud of her Indigenous heritage, but she also encourages tribes to hold on to their distinctive identity separating them from mainstream religious traditions such as Hinduism.

Most tribes, for example, are against the dowry system in marriage ceremonies. While widow remarriage is encouraged in tribal culture, widows don’t have to wear white clothing or abstain from the usual practices in Hinduism. They are against symbols such as jewelry and vermilion powder in the parting of women’s hair that mark out married women.

“For us religion is not about visiting temples, mosques and churches,” she said. “Our gods roam free and there’s a strong spiritual force in nature that anchors us to our lands.”

The activist often visits the Nandaraj Mountain, which is sacred to the local Indigenous people. She worships crops and seasonal fruits in harvest season and takes part in tribal festivals. On special occasions, she visits the Ma Danteswari Temple, a towering 14th-century shrine that’s considered an important Hindu pilgrimage center.

“Goddess Danteswari is the divine feminine who’s aware of state tyrannies and injustices meted out to our tribal people,” she said. “She inspires me to be an active agent of change.” When Sori tested positive last year and when she was summoned by India’s main counterterrorism task force implicating her in the murder of a local politician, she relied on the divine feminine.

Besides her spiritual calling that informs her work, the activist gets solid support from her family. Her father makes sure to visit her when she’s in jail or while attending court hearings. Her three children — despite a difficult childhood being passed from relative to relative, village to village, to keep them safe and undergoing regular police questioning — continue to stand by her side.

“In this land of fire and gunshots we have to keep fighting this ideological war against state repression and Maoist violence,” she said.

The fate of the children who fled her school to join the Maoists haunts Sori night and day. She believes she let them down by promising a future free of bondage.

“This is the centerpiece of my struggle,” she said. “I want to start my own ashram for Chhattisgarh’s dispossessed children so they have the courage to fight for their rights.”

Priyadarshini Sen is an independent journalist based in New Delhi. This article was produced as part of the Spiritual Exemplars Project fellowship with the University of Southern California’s Center for Religion and Civic Culture.)