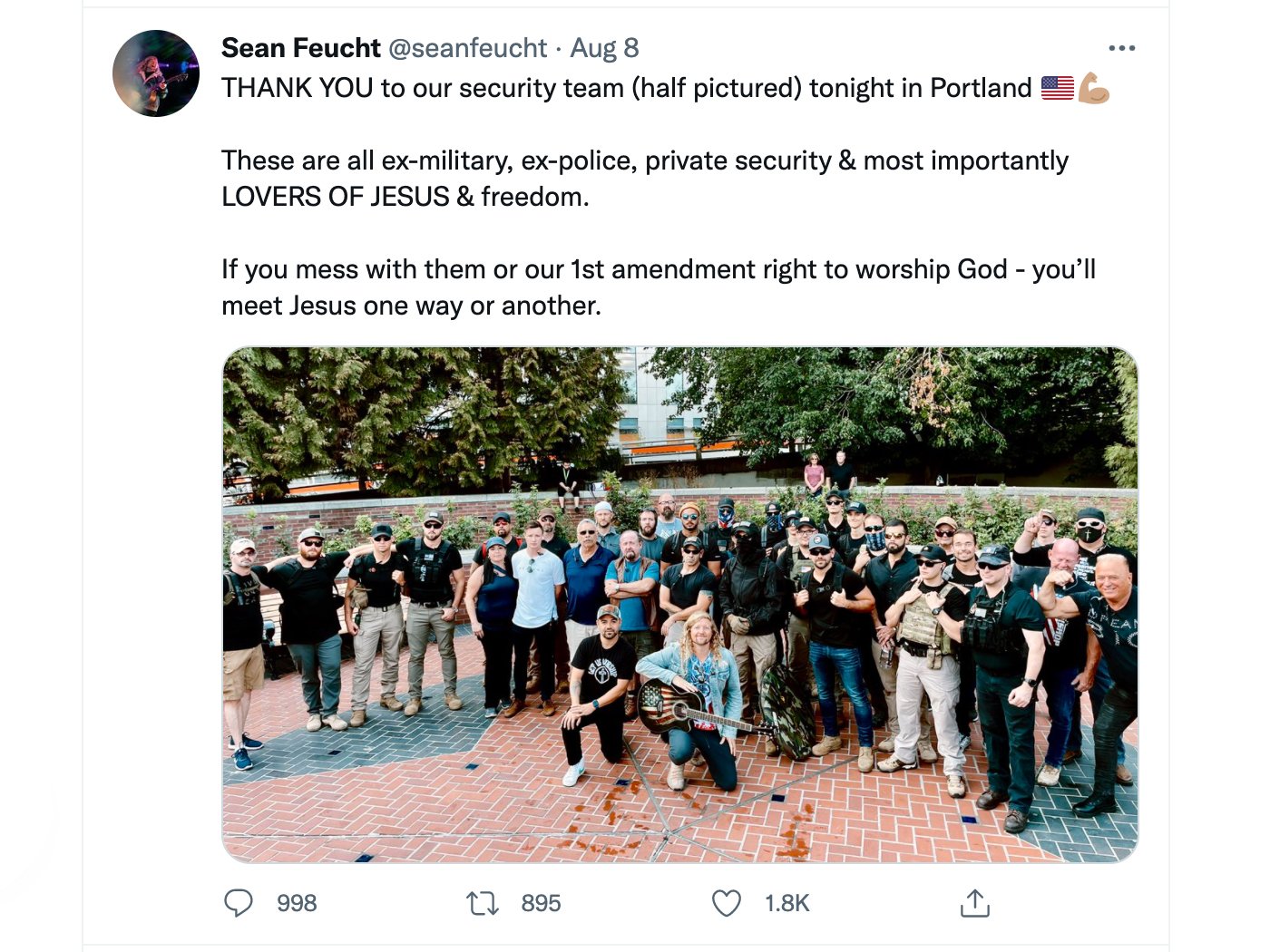 Musician Sean Feucht posted a controversial statement about his security team in Portland on Twitter, Aug. 8, 2021. Screen grab via Twitter/@seanfeucht

(RNS) — Jeffrey Grace, a resident of Battle Ground, Washington, charged in connection with the Jan. 6 insurrection, maintained in a recent post to his Our House USA YouTube channel that a militant response is necessary to push back against anti-fascist protesters.

That response, Grace suggested, might include throwing concrete, frozen water bottles and balloons filled with paint at antifa foes. “If someone is going to protect something,” he said, “I would hope that you have enough common sense to protect yourself so you could stand true to what you believe.”

Grace was among those providing security for religious gatherings held on Saturday and Sunday (Aug. 7-8) at Portland, Oregon’s Tom McCall Waterfront Park, by faith leaders Artur Pawlowski, and Sean Feucht that resulted in clashes between left- and right-wing groups.

This week, federal prosecutors asked a U.S. district court to modify the terms of Grace’s release from jail while he awaits trial, requesting new restrictions that would forbid Grace from “possessing any firearms, weapons, or destructive devices.” They cited his appearance at Pawlowski’s event, claiming that he provided armed “perimeter security.” At Feucht’s speech the next day, the prosecutors say, he carried a chemical irritant and a wooden baton.

The presence of Grace and others have prompted grass-roots hate-watch groups to push for more information about Feucht’s security team, who he referred to as ex-military, ex-police “LOVERS OF JESUS.”

Locals who monitor hate groups said that they fear that the presence of conservative nationalists could invite more confrontations at future demonstrations.

Feucht, who couldn’t be reached for comment, shared a photo on Twitter Sunday in which he is flanked by men wearing military style vests and insignia. “If you mess with them or our 1st amendment right to worship God – you’ll meet Jesus one way or another,” Feucht wrote in the tweet.

Anti-fascist collectives such as Emerald Valley ARA and groups like Willamette Valley Hate Watch and Public Record and Data Archives Portland have been attempting to identify those seen volunteering as security personnel on the day of Feucht’s “Let Us Worship” gathering.

The groups have highlighted the presence of Tusitala “Tiny” Toese, of the Proud Boys, who, according to journalist Sergio Olmos, led far-right extremist groups in closing an intersection to allow attendees of Feucht’s worship event to exit the waterfront. They’ve pointed to Andrey Ivanov as leading security for Feucht and who Emerald Valley ARA referred to as a “christo-fascist.”

They also zeroed in on Grace’s involvement in Portland.

Federal documents note that Grace was carrying a firearm in Portland, and cite his YouTube channel, where in separate videos he talked about providing security over the weekend. In one video, Grace is wearing a black and white “Let Us Worship” T-shirt.

“God’s got this. He’s using us and he’s aligning us,” said Grace, who in a video Monday wore a shirt emblazoned with the image of the Capitol and the words “Our House.”

Grace referred to antifa as “ugly” and “evil” and said “they weren’t effective in stopping the Christian gathering.” He said he’s “looking forward to the next event I’m able to embrace.”

Pawlowski, who is known for his anti-LGBTQ rhetoric and who earlier this year held a lit tiki torch protest of COVID-19 restrictions in Alberta, Canada, attracted about 50 attendees Saturday, with a group of people holding bats and paintball guns serving as volunteer security, according to Oregon Public Broadcasting. Willamette Week reported that left-wing counterprotesters disrupted the event with smoke canisters and destroyed sound equipment.

Portland has become an epicenter of protests since the 2020 police killing of George Floyd, with federal agents regularly deploying tear gas to disperse crowds, and frequent clashes between anti-fascist protesters and far-right militias and groups such as the Proud Boys.

Feucht returned to Portland Sunday on the anniversary of his 2020 visit on his national “Let Us Worship” tour that protested COVID-19 restrictions. While some disagreements were deescalated during Sunday’s worship event, right-wing guards shot fireworks from their pickup trucks as night fell and black-clad anti-fascists threw metal spikes on the road as a countermeasure, according to Willamette Week.

Feucht, in an Instagram video Monday, said that he called churches to help with security after seeing the confrontations the day before. He denied being associated with the Proud Boys, saying he wasn’t familiar with the group.

Chris Overstreet — an outreach pastor of Bethel Church and the School of Supernatural Ministry in Redding, California — said he helped assemble a security team for Feucht, according to a Facebook video he shared Monday.

“Antifa is trying to put fear in the church across the North West. It’s time for the church to be able to say, ‘We are not backing down. We’re not hiding in fear … We’re not going to play it safe. We’re going to be bold with our faith,’” Overstreet said.

Overstreet, in the video, said he contacted security teams that he knew were involved in churches. Overstreet said their “Christian security” did not engage in vulgar or confrontational behavior, nor did they invite the Proud Boys.

Feucht, in his Instagram video, advised: “For any believers, Christians out there, progressives, whatever you want to call yourself, woke people, that are defending antifa right now, you need to stop, because these guys are blatantly demonic.”

Dockter, who describes himself as a spiritual person from a Christian background, said such statements undermine the advocacy and the protests involving leaders of all faiths in Portland.

“There’s all of these amazing things that are happening in the faith community, but Sean Feucht is using the language of Christianity to his benefit,” Dockter said.

RELATED: In Oregon, churches and anti-fascists unite to provide mutual aid to fire evacuees and others in need

In the past year, Faith Bloc — a loose group of lay people from different faiths that emerged to support the protests that began after Floyd’s death — helped mutual aid groups, some of whose members identify as anti-fascists, connect with houses of worship to host donation drives and tent distribution centers to help fire evacuees during the Oregon wildfires last fall.

“There are members of antifa I know who are deeply faithful people of Christian faith,” said  Dockter, adding that they also belong to a range of other faiths.

“For the Christian people, we believe in the concept to love mercy and walk humbly, so we’re not walking around waving a flag with a cross on it, trying to call attention to ourselves,” he said. “We’re just trying to serve people.”