(RNS) — Jake Dockter stumbled on the street and feared walking into oncoming traffic after being tear-gassed, when a stranger grabbed his arm, pulled him to the side and poured water on his face.

It was late July, the second month of protests in Portland, Oregon, and Dockter said he and others were tear-gassed by federal agents near the downtown courthouse.

“As a spiritual person from a Christian background, this is what we talk about when angels help people,” Dockter said. “This stranger saw a need and poured water so I could see. It has all these religious connotations.”

The racial justice protests in Portland — which resumed Friday (Sept. 18) after pausing due to the hazardous air quality from nearby wildfires — have represented for Dockter the best of community solidarity. Even, he said, as federal agents used tear gas to disperse crowds, and as Proud Boys and far-right militias clashed with antifa (anti-fascist) protesters.

He’s seen mutual aid groups such as the Portland EWOKS — Equitable Workers Offering Kommunity Support, a collective of street medics and crisis support workers — and Team Raccoon PDX — a group that cleans up after protests — providing gas masks and food, fundraising for respirators and assisting people impacted by tear gas or projectiles. The groups support Black Lives Matter and are led by a diverse array of people. 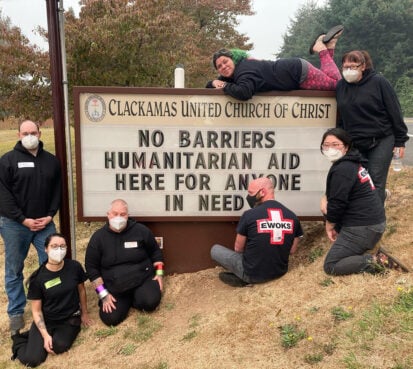 Some members of these groups, Dockter said, identify as anti-fascists and as a result have been doxxed and targeted by right-wing conservatives. Now, in the wake of the wildfires, these groups are helping people who have been displaced or forced to evacuate from their homes. And some of them are partnering with churches to set up donation drives and distribution centers for  hygiene kits, school supplies, clothing and food.

They’re doing so with the help of Faith Bloc, a loose group of lay people from different faiths that emerged to support the protests that began after the killing of George Floyd by Minneapolis police officers. Other groups such as the Interfaith Movement for Immigrant Justice are also linking these groups to churches, Dockter said.

Faith Bloc — which includes Jewish, Muslim, Christian and Wiccan members — is connecting mutual aid groups with houses of worship that have the space to hold distribution centers.

Dockter said churches are safer places for mutual aid groups that have been targeted by right-wing groups. Churches don’t have to use personal home addresses to receive donations and “it’s kind of a neutral third party territory,” Dockter said.

“It’s just this really amazing, organic and chaotic but beautiful example of disaster relief and mutual aid coming from the queer community, coming from the Wiccan community, and churches are just saying: ‘Yes, use our space. All of these differences, we don’t care. Are you loving our community? Yes, great. Let’s move on and do that together,’” Dockter said.

One such church is Clackamas United Church of Christ in Milwaukie, a city south of Portland. The mainline Protestant congregation is an open and affirming church that’s garnered widespread attention for its provocative announcements on the church marquee sign. Mutual aid groups set up a distribution center there for about four days before disbanding Monday night to move to another location closer to an evacuation site.

The Pacific Northwest Region of the Forest Service on Monday reported that 27 large wildfires continued to burn 2,460 square miles across Oregon and Washington. The number of fatalities from Oregon’s recent wildfires has increased to nine, according to The Associated Press. About 2,300 Oregon residences have been destroyed. Bags of donations sit in pews at Clackamas United Church of Christ, which served as distribution center for mutual aid groups assisting those in need, in Milwaukie, Oregon. Photo courtesy of Clackamas UCC

At Clackamas United, tents were set up on the church’s lawn, where street medics were available for first aid assistance. Volunteer mechanics were stationed in the church parking lot to assist anyone whose car needed an oil or tire change. Other volunteers were on hand to distribute clothing, food and other supplies to those evacuated because of the fires or for anyone who was simply in need.

To Ericksen, it’s important to be of service to these groups that “are doing the work that I describe as the gospel.”

That some of them might be members of antifa doesn’t dissuade him. In fact, he said, he hopes to reveal a different side of antifa, a side that he believes hasn’t gotten appropriate attention.

“The important thing for me was to show that members of antifa are helping all people,” he said.

“The only story that’s being told is a false narrative that antifa is destroying property,” he said. “Part of why I wanted to work with them is because I want to expand our partnerships within the church.” 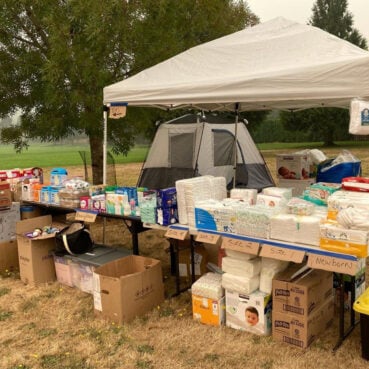 Donated items for babies, including diapers and formula, are arranged for distribution at Clackamas United Church of Christ in Milwaukie, Oregon. Photo courtesy of Clackamas UCC

As fires scorched large swaths of Oregon, rumors claimed antifa members were responsible for the fires. Law enforcement agencies have debunked those claims. However, President Donald Trump has described antifa as agitators and has tweeted that the U.S. would be designating antifa as a terrorist organization

Experts such as Stanislav Vysotsky, a University of Wisconsin-Whitewater professor of sociology and criminology, describe antifa as a “decentralized collection of individual activists who mostly use nonviolent methods to achieve their ends.”

“Their goal is to resist the spread of fascism,” Vysotsky wrote in a piece on The Conversation.

That word can be vague, but Vysotsky said antifa activists generally see fascism as “the violent enactment and enforcement of biological and social inequalities between people.”

To Rayah Dickerson, who does children’s ministry for Clackamas United Church, anti-fascism is a way of thinking and not necessarily a group. Just like when people identify as religious, it doesn’t mean they automatically belong to a specific church, she said.

Dickerson, who is a member of Faith Bloc, helped link Clackamas United Church with EWOKS when the group was looking for a new location. The church was a central location for fire evacuees.

“They have very quickly adapted to what the next need is. I think part of that is because many of these people are marginalized,” Dickerson said.

“When you’ve been in need and have nowhere else to turn and someone loves you and doesn’t shame you for it, it is transformative,” she said.

“The gospel is being lived out every day by witches and heathens and Muslims and atheists,” Dickerson said.