(RNS) — We are approaching the September anniversary of an event that illustrated the power of religion in the world, one so influential that it altered our view of entire religious communities, and changed the way faith groups relate to one another.

I speak of Sept. 11, 1893, the day Swami Vivekananda, a Hindu monk who had come to the Columbian Exposition in Chicago as a delegate to the first Parliament of the World’s Religions, gave a speech to an audience of 7,000, in a space that is now the Art Institute of Chicago. He became a sensation and helped to introduce Hindu philosophy, as well as yoga, to the United States.

That day Vivekananda spoke of the value of religious tolerance, articulated a Hindu theology of interfaith cooperation and invited his colleagues of other faiths to do the same. He ended his speech by praying for the end of “all fanaticism, of all persecutions with the sword or with the pen, and of all uncharitable feelings between people wending their way to the same goal.”

RELATED: How Americans came to embrace meditation, and with it, Hinduism

We are, of course, approaching the anniversary of another 9/11, one that shaped the world we live in now, one that had all the qualities that Vivekananda sought to rid us of — fanaticism, persecution, uncharitable feelings.

Al-Qaida and the Taliban showed us that faith can be a bomb of destruction. Islamophobes in the United States showed that faith can be a barrier of division. But in our post-9/11/2001 world, we can see patterns that are more in line with Vivekananda’s vision of faith as a bridge of cooperation.

Some of this happened at the level of global leaders. Tony Blair founded his Faith Foundation, aimed at interfaith understanding. Madeleine Albright wrote a book called “The Mighty and the Almighty,” which made the case for greater capacity within the United States government for positively engaging diverse religious actors. The Clinton Global Initiative had a religion track. The governments of Turkey and Spain launched an Alliance of Civilizations. 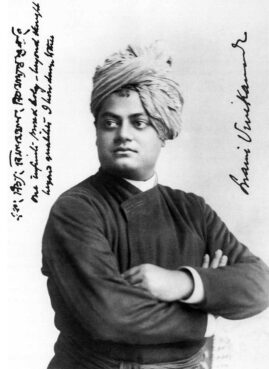 Swami Vivekananda in Chicago during the Parliament of the World’s Religions in September 1893. Photo courtesy of Creative Commons

It was in this contested environment that the organization I lead, Interfaith Youth Core, grew into a civic force in the United States. When I started the organization in 1998 with the idea of inspiring young people to be interfaith leaders through social action projects, few people paid attention.

After 9/11/2001, the phone didn’t stop ringing. Colleges were interested in starting interfaith student councils and for-credit courses. Communities wanted to host Days of Interfaith Service. Houses of worship wanted to do youth exchanges. Foundations and philanthropists were interested in funding these programs, and the media wanted to tell the story.

Yet I think of these initiatives as representing the spirit of 9/11/1893. As we commemorate the 20th  anniversary of 9/11/2001, as we mourn the terrible loss of life, as we celebrate the heroic first responders, we should commit ourselves more fully to the vision of that earlier 9/11.

We should recognize that our religious diversity can be a force for good.

No one should be scapegoated for actions that other human beings committed simply because they share a skin color, a language or a religion. The terrorists of all faiths actually belong to one faith — the faith of terrorism.

Faith can be a bridge of cooperation, but bridges don’t fall from the sky, people build them. And when we build those bridges of cooperation between different faiths, we build a world that is worthy of the highest ideals of all of our faith.

It is a vision beautifully expressed by the Chicagoan Charles Bonney in the concluding statement of the 1893 Parliament of the World’s Religions: “From now on, the great religions of the world will make war no longer on each other, and instead on the giant ills that afflict humankind.”

(Eboo Patel is founder and president of Interfaith Youth Core. The views expressed in this commentary do not necessarily reflect those of Religion News Service.)