(RNS) — The Supreme Court’s Aug. 26 decision to end the federal eviction moratorium brings new challenges for religious leaders and organizations working to aid those at risk for homelessness. More than 3.6 million Americans say they could face eviction in the next two months, according to recent data from the U.S. Census Bureau.

“We’re very, very nervous,” said Sarah Abramson, vice president of strategy and impact at Combined Jewish Philanthropies in Boston. “There is already a tremendous housing shortage in Boston. And we know from our data, and from the experience of our partners who do this work, just how difficult it was for somebody who has been evicted in the past to get housing.”

Jerrel T. Gilliam, executive director of Light of Life Rescue Mission in Pittsburgh, also shared concerns. “We are going to need to be very creative, and to think outside the box in order to prepare for what could be a potential onslaught of people needing assistance in a short amount of time,” he said.

The Supreme Court ruled that the Centers for Disease Control and Prevention lacked the authority to establish a federal eviction moratorium, which the court said requires congressional approval. The decision comes as renters and landlords face a backlog of promised funds. Currently, only about $5.1 billion of $46.5 billion in federal rental assistance funds intended to prevent eviction have been distributed, according to Census Bureau data.

“We definitely have to work hard to make sure that money reaches people,” said Shams DaBaron, a New York activist who also goes by “Da Homeless Hero.” “We have to cover both sides: these small landlords that need it, and those who are extremely poor.” DaBaron is currently living in an apartment with the support of a voucher program, but he says the city is behind on three months of rent. An eviction moratorium is one measure that can help buy more time while such funds face bureaucratic delays.

DaBaron gained national attention as unofficial spokesperson for the residents of the Lucerne, a hotel-turned-shelter during the pandemic in Manhattan’s Upper West Side that became the center of New York’s “homeless hotel” debate. When he wasn’t advocating for his fellow residents, DaBaron partnered with local group Open Hearts to develop a program called Soulful Walk and Talks. The program provided hotel shelter residents the opportunity to walk to the nearby Riverside Park with local faith leaders from a range of religious traditions who provided a safe space for spiritual reflection.

“We didn’t want to make it a religious thing, but we understand the value of spirit, of soul, of that deep essence within everybody,” said DaBaron. “One of the things that came out of it, from talking to many of the faith leaders, is that many of them were transformed, just as many of us were transformed.”

“It was definitely very impactful,” said Rabbi Lauren Herrmann of the Society for the Advancement of Judaism, who joined in the Walk and Talks and organized other clergy participants. “For one thing, I really understood for the first time in my life the issues surrounding the shelter system, and why people choose to be on the streets instead of being in shelters. … The shelter system is deeply broken, and some of the stories I heard were deeply upsetting.” 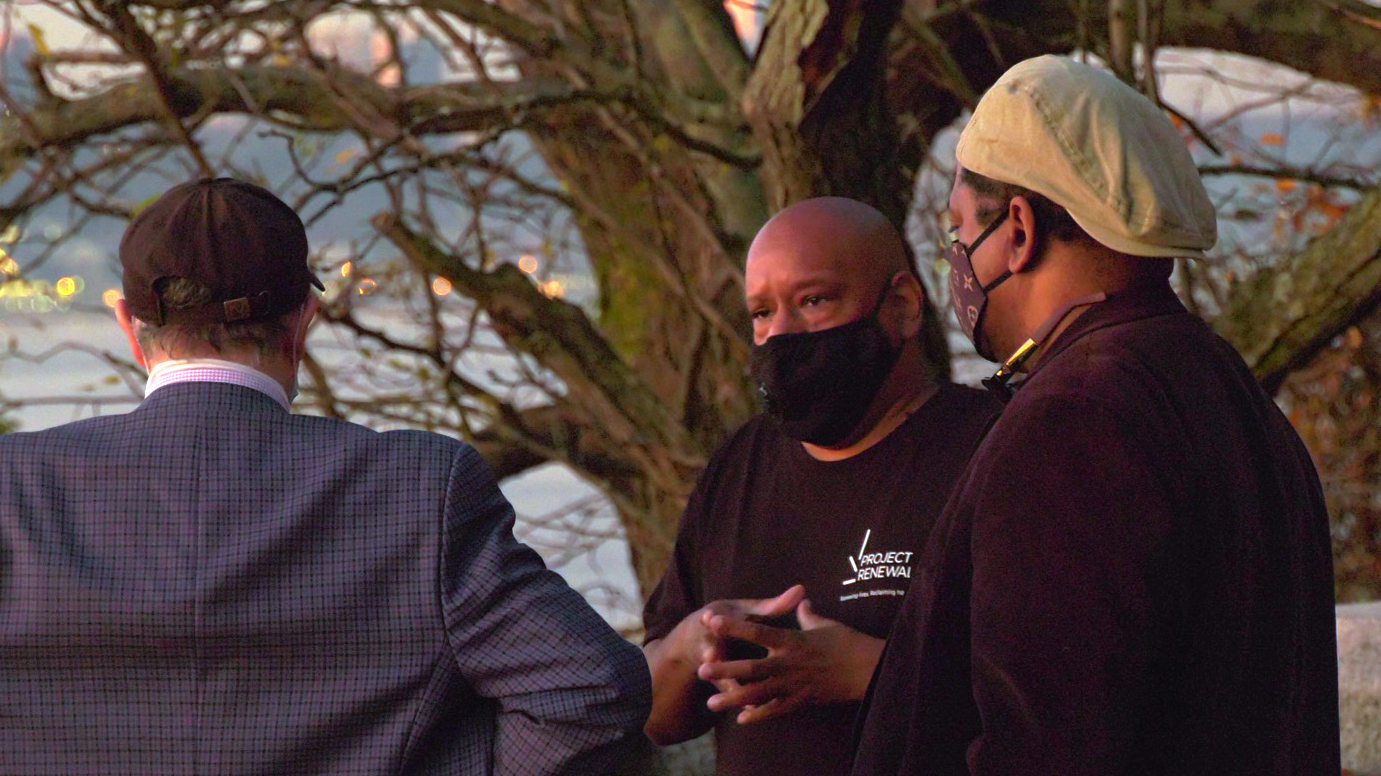 Herrmann and DaBaron see the Soulful Walk and Talks as tending to the essential spiritual needs of those facing homelessness, and they hope to continue and expand the program as the federal eviction moratorium lifts. Yet DaBaron and Herrmann also pointed to structural changes that need to take place. New York state implemented a new eviction moratorium on Sept. 1 that extends until January 2022. But the moratorium doesn’t address the city’s lack of affordable housing, the income cliffs that foster dependance on government programs and the health and safety risks facing those in congregate shelters, where many former Lucerne residents are finding themselves since the hotel shelter closed this summer.

In Pittsburgh, Light of Life Rescue Mission takes a multifaceted approach to homelessness by providing a range of services including case management, education, unemployment services and accommodations for those facing housing insecurity.

Gilliam, the Christian organization’s executive director, is concerned the end of the eviction moratorium will mean a sudden, sharp increase in the number of residents facing evictions. At one point during the pandemic, evictions in Pittsburgh slowed to a complete halt — in a typical year, according to Gilliam, Pittsburgh sees 14,000 evictions. 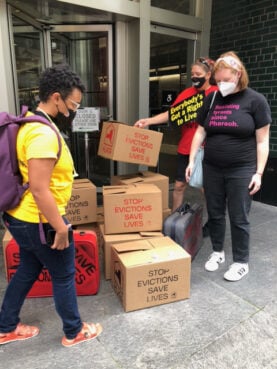 Gilliam suggested implementing preventive measures that would allow landlords to receive rent payments while enabling those at risk for evictions to find suitable housing.

“We’re pleading with everyone,” said Gilliam. “Let’s try to get people help while they’re still in the home and help the landlord have another month or two of rent, so that we can find a place for them without them having to pass through homelessness to get assistance.”

Homelessness prevention is the primary goal of Combined Jewish Philanthropy’s housing efforts in Boston. CJP partners with United Way and the Bank of America Foundation to fund homelessness prevention through an organization called HomeStart. It costs the Boston Housing Authority thousands more to evict a family than to house them through HomeStart, so CJP and its partners support a per-eviction reimbursement rate model that allows Boston Housing Authority to pay HomeStart to keep people housed.

CJP has made funding for homelessness prevention a priority in anticipation of the eviction moratorium’s end.

“We’ve been fortunate to raise upwards of $4 million for COVID-immediate support as an organization,” said Abramson of CJP. “Very intentionally, we have held back over $600,000 of those funds for COVID relief, because we knew the end of the eviction moratorium would come and we would need to have a response.”

The pandemic hasn’t been as kind to all religious organizations working to serve those facing housing insecurity. Chaplain Asma Inge-Hanif, founder and executive director of Muslimat Al Nisaa, has been serving the Baltimore community for 30 years. The organization provides health, education and social services to all, regardless of their ability to pay, and its Home Shelter is especially designed to meet the needs of Muslim women. She says her organization has served thousands of people over the years. 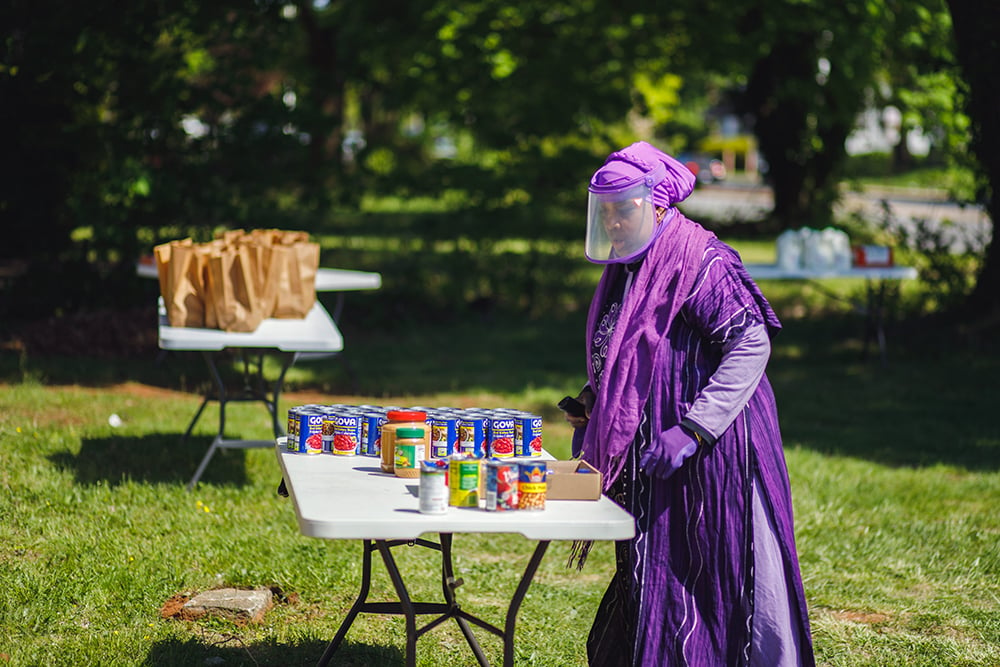 Inge-Hanif is no stranger to homelessness and cares deeply about respecting the dignity of all those she serves.

“I came from this type of environment. I know what it feels like,” said Inge-Hanif, who has never taken a salary for herself. “And I know how people look at you and treat you, when you have less than.”

In the last year and a half, Inge-Hanif almost died from COVID-19 and lost her organization’s signature location. “I couldn’t pay the rent anymore, even though they claim there was an eviction moratorium,” she said. Now, Inge-Hanif is working to keep the shelter open on a small scale so she can help meet housing needs, especially those of people arriving from Afghanistan.

“I’m getting so many requests all the time from people who are getting evicted,” she said. “It’s often people who have no status and people of color. Everyday I get seven to 10 requests for shelter and housing. And I can’t help them.”

As the federal eviction moratorium ends, Inge-Hanif is hoping to raise money for an apartment building so she can house more people. She also says governments need to make rental assistance and other services more accessible.

“That’s why people are being evicted. They can’t get through the paperwork,” said Inge-Hanif. “The people who need the help are not in a position to maneuver through all the red tape. … The way the system is set up prevents the people who are most in need from actualizing success and being self-sufficient.”