LOS ANGELES (RNS) — As Southern California’s housing crisis continues to fuel homelessness across the region, a number of churches, particularly Black congregations, are stepping up to build affordable housing on their church land.

And they’re banding together to send a clear message to developers: They will not be taken advantage of.

As the homeless population is estimated to hover above 66,000 people in Los Angeles County alone, there are thousands of acres of church land across California that can be used to develop housing. Pastors — some who have inherited debt or years of deferred maintenance and whose church memberships may not be as large as in years past — recognize this opportunity, but may lack the resources or knowledge to cut housing deals that would not only help the most needy, but also help their church communities remain in their neighborhoods.

For years, the Rev. John Cager, pastor of Ward African Methodist Episcopal Church in South Los Angeles, has seen how developers would run “roughshod over the churches,” buying their properties for housing while offering sometimes as low as 2% of the revenues in exchange.

What often happens is many of these churches — considered “land rich and cash poor” — would get a check, very often under market rate, “and then they would be out,” Cager said.

“Many times when churches sell, that breaks up the congregation. They don’t have the organizational wealth to stay together, the money kind of evaporates and what you basically have is the loss of the church community,” said Cager, whose church is 115 years old. 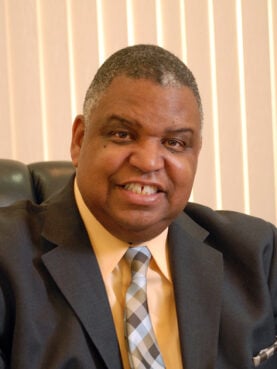 That’s a main reason Cager in 2017 helped create the Faith Community Coalition, a network of pastors that seeks to find better opportunities for faith leaders who may feel the need to sell when they’re in a position of declining revenue. Ultimately, the coalition aims for churches to work with developers who are willing to enter into full partnerships with parishes, evenly splitting the revenues and paving the way for the houses of worship to eventually own the properties.

So far, the alliance has more than 200 member churches, most of them African American. A number of Latino evangelical churches are also part of the network. Cager said it’s no coincidence many of his fellow Black and Latino pastors were being bombarded by people who wanted to buy their churches.

“Black and Latinx communities, communities of color, have historically been preyed upon,” he said.

Cager said the coalition strives to build housing for those who are unhoused.

“The operating ethos of the coalition is that we want to do housing and do development as a ministry,” Cager said. “We believe in the gospel of Jesus Christ.

“We have a heart for serving the least, the lost, the left out and the left behind. So it is the heart of our churches and our church members that we have an eye for the unhoused and we have an eye for seniors, for transition-aged youth. Those who have the most issues finding a safe secure housing,” he added. 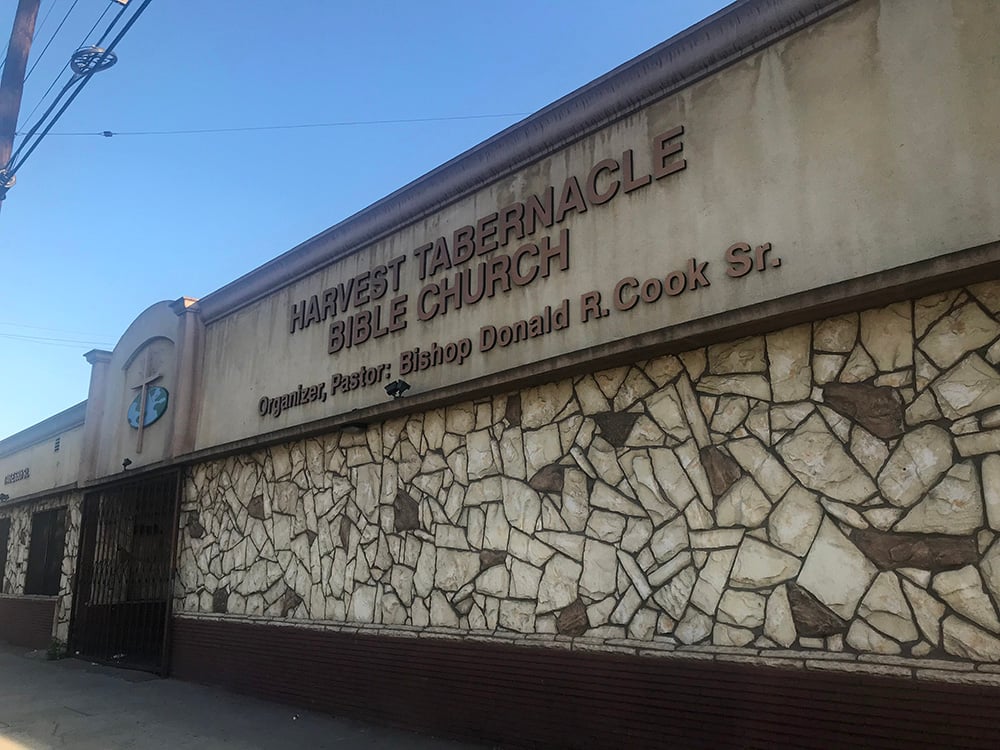 Harvest Tabernacle Bible Church around the Southeast Los Angeles area will be building housing on its existing land for about 150 families. RNS photo by Alejandra Molina

A number of churches are fulfilling this mission through a partnership with RMG Housing, a private developer, that with the help of a more than $100 million private-equity impact fund and without government funding, is expected to finance 30 permanent supportive housing projects. Currently, about seven of the 15 projects are planned to take place on church land.

The housing units will be constructed for under $200,000 each, said Deborah La Franchi, president and chief executive of impact-fund manager SDS Capital Group. Revenue to cover the debt will come from sources such as the federal Section 8 housing program that will be used to pay the rent.

Most of the churches SDS Capital Group has been working with are African Methodist Episcopal and African American Baptist churches that are pillars in their communities, La Franchi said.

“This is a way for the churches to achieve their mission, help to revitalize their community (and) help transform the lives of these individuals that will be housed in their property,” La Franchi said. “At the same time the church is benefiting of the cash flow of the project, which is very helpful to many of them.” A rendering of the proposed housing to be built on the current site of Harvest Tabernacle Bible Church around the Southeast Los Angeles area. Image courtesy of SDS Capital Group

For some churches, this may mean razing their entire properties and using the resources to move to a new location that’s scaled to the current size of their congregation, La Franchi said.

RELATED: In Los Angeles, a synagogue opens its parking lot to people living in cars

Tim Roth, a developer for RMG Housing, said he didn’t specifically seek to do business with churches. He was introduced to pastor Cager through others in the real estate business. What Roth was seeing across LA and other cities were zoning changes that, whether intentionally or not, devalued church properties. This would lead to a church not being as valuable as the land across the street, Roth said.

“That was alarming to me,” he said.

Roth, who was raised Catholic and who described himself as religious, said that instead of buying church land, RMG has opted to engage in 99-year ground leases with the churches. In turn, the churches can participate in the cash flow of the project, on equal terms with RMG. The houses of faith can either “finance us out, or buy us out,” Roth said.

“They can own it completely if that was in their best interest or they can simply maintain use and have us as partners all the way through,” Roth added. “That was the important thing, that we can be a good partner and, in time, they can own it all.”

“It’s all about fellowship, isn’t it?” he said.

At Heavenly Vision Church in South Los Angeles, which has been at its current location since 1969, church members are getting ready to break ground on a 54-unit permanent supportive housing structure that will be built on the church’s school lot after the school is demolished. The project will be funded through SDS Capital Group. 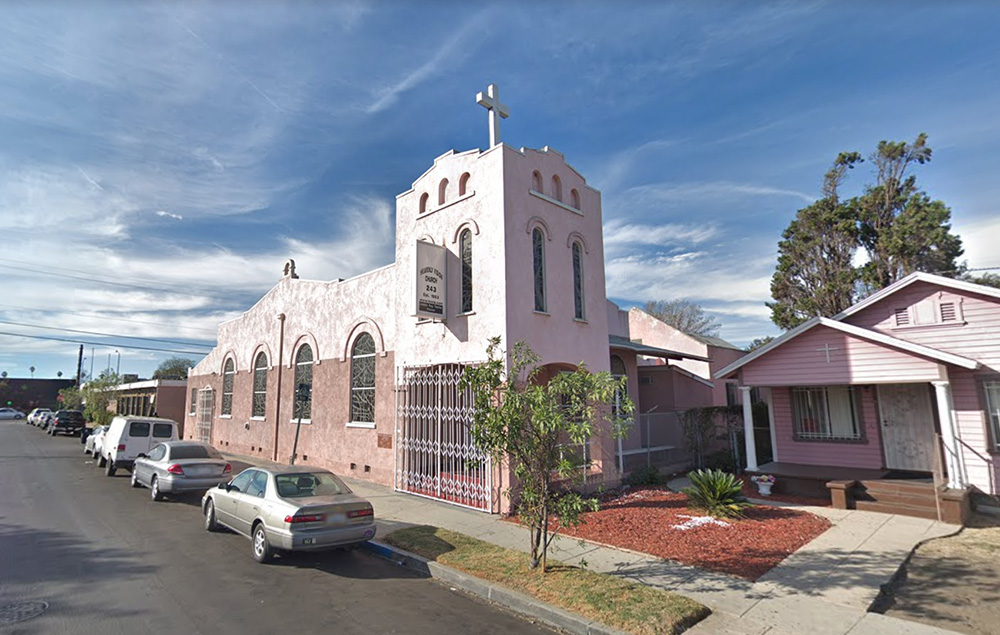 Bishop James Taylor, pastor of Heavenly Vision Church, eventually foresees the church building also being leveled to build more housing. Taylor said the congregation is open to doing church digitally or in a different location to make way for housing for those who need it most.

“We want to make sure we’re meeting that need more than meeting our own comfort,” Taylor said. “Giving somebody a place to stay is more important for us than having a comfortable place to worship in.

“It should be the church’s desire to leverage the land and the property they own to meet the need,” he added.

Harvest Tabernacle Bible Church around the Southeast Los Angeles area is another congregation that will be building units through RMG Housing and with SDS funding.

The church — adjacent to Pueblo del Rio, one of the oldest public housing complexes in LA — will be demolished to make way for affordable housing accommodating about 150 families.

Senior Pastor Donald Cook said the congregation, which his father established in 1976, has about 125 members and will relocate to a new space nearby.

“We still want our hand in the community,” Cook said. “We will not abandon the people. We will not leave.”

News
New book examines the religious lives of people without homes
Follow us on Facebook!
Submit your photos to RNS