(RNS) — When Taliban gunmen posed behind former Afghan President Ashraf Ghani’s “ornate wooden desk” in the Kabul presidential palace they had seized, the scene “served as visual confirmation that power in the country had fully shifted hands.” So noted an Aug. 16 New York Times report, but that and other stories with similar photos neglected the enormous painting on the wall behind the militants.

It too proves to be revealing aesthetic propaganda.

The painting depicts a mid-18th-century scene, in which a large crowd looks on as Sufi mystic Sabir Shah crowns the kneeling political and military leader Aḥmad Shah Durrānī, considered the founder of the modern Afghan state. Modestly, the dervish places a crown of wheat — a crop so vital it appears in the Afghan emblem — rather than precious metals and gemstones on Durrānī’s head.

The historic coronation is very significant to Afghan people, according to Jennifer Brick Murtazashvili, an associate professor at the University of Pittsburgh and co-author of the new book “Land, the State, and War: Property Institutions and Political Order in Afghanistan.”

“For many, it represents the founding of the Afghan state in 1747,” she said.

Farhad Azad, Los Angeles-based publisher of the nearly 25-year-old Afghan Magazine, sees something surreal in the Taliban fighters posing in front of that particular painting. “It’s a little bit ‘Twilight Zone’-ish,” he said.

The Taliban is known for destroying and covering up representational art with human or animal forms, Azad noted. He was skeptical that Taliban foot soldiers recognize the scene, but if they did, he figured they would find it a mixed symbolic bag.

The work portrays mid-18th-century Afghanistan “before Western molestation,” which would appeal to the Taliban perspective, he said. “No Western empire has come in yet and forged boundaries.”

But even if one chalks up pre-Western-intervention in Afghanistan as a plus for the gunmen, the crowner portrayed as a Sufi mystic presents a counterexample. As adherents of the orthodox Indian Deoband school, the Taliban rejects the Islamic mystical group.

Sufism — whose most renowned affiliate is the poet Rumi — embraces trances and romantic religious approaches to discover divine specks in daily life, while the Deobandi approach is more “Don’t draw outside the lines,” according to Azad.

“It’s a very rigid, Islamist approach. It’s revisionist,” he said. “That’s where it gets a little bit weird. Your brand of Islam does not believe in Sufism.”

Another sticking point for the Taliban is the painting’s illustration of an era when clerics would not have been permitted to run the government. The Taliban fighters posing before the work crave less separation of church — or more precisely here, mosque — and state.

“The clergy was pushed to the side. A bishop could control the masses, but he doesn’t wear the crown,” Azad said of the depicted scene. “The Taliban has a different view, which comes from the Pakistani madrassas.”

Murtazashvili noted the coronation, which occurred near Kandahar, Afghanistan’s second largest city, marked the beginning of what became the Durrānī empire, with the military leader depicted in the painting being named “Pearl of Pearls.” The modern Afghan state was still centuries away, but many Afghans mark their state’s founding to this 1747 episode, she said.

Murtazashvili was unsure how the gunmen would feel about the artwork’s depiction of non-Islamic leadership. “I don’t think the Taliban had time to take down the picture,” she said. (Al-Jazeera footage shows other artworks hanging in the palace.)

Azad, who was born in Afghanistan, also doesn’t know whether even senior Taliban officials would be familiar with the scene. But he noted that a very similar painting by the late 20th-century Afghan painter Abdul Ghafoor Breshna — one that can be found on Wikipedia — has long been printed in many Afghan grade school textbooks.

Mythology surrounds Durrānī — who was crowned when George Washington was a teenager — that mirrors fables in U.S. textbooks.

With a substantial army and vast resources, having assumed power after the assassination of Persian ruler Nādir Shāh in 1747, Durrānī could have crowned himself, essentially. He would not necessarily have needed a Sufi dervish or wheat stalks.

“That’s the story. Do we really know that that happened? No,” Azad said. 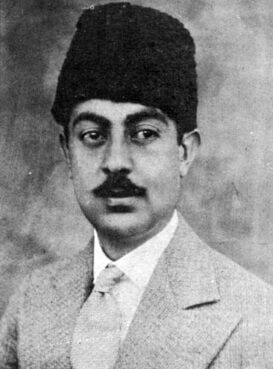 Some controversy surrounds the authorship of the picture on the palace wall. An article in La Nacion and several Twitter sleuths identify it as Breshna — the same attribution some other experts shared with Religion News Service. But Azad, who used to curate the artwork of one of Breshna’s disciples, said the palace work, though in the artist’s style, seems to be more recent.

“I think it’s a rendition of Breshna,” he said.

For one thing, Breshna tended to paint in watercolor, while the palace painting appears to be oil. And Breshna’s works, destined for school textbooks, display simple compositions, whereas the palace painting contains many more figures and more busyness, according to Azad.

The German-trained Breshna, who hailed from a royal family, met his wife in Germany and then returned to Kabul to produce music and paint Afghan scenes. Those pictures were intended to help the Afghan people appreciate their national identity and country, according to Azad. “He was almost like a photographer of scenery and places,” he said.

Although Azad thinks the work is in the style of, but not authored by, Breshna, he is convinced it is a very significant symbol.

The notion that divine intervention bequeathed political power would appeal to the Taliban sense of “chosenness,” he said. He notes the photographed gunmen have beards, facial features and turbans that echo the Durrānī figures in the painting. Having not heard audio recordings of the Taliban men, he cannot place their accents, but judging from the turbans, he thinks they are from Kandahar — the same city the Taliban is reportedly considering for its capital.

A recent tweet from the government-run Bakhtar News Agency, now managed by the Taliban, features an image of Durrānī’s tomb in Kandahar, Azad noted.

The 1747 coronation, which was the result of a grand council decision called loya jirga, mirrors Taliban views of its recent return. “We are in power, because we’ve been chosen by divine intervention,” Azad said, channeling the gunmen’s voice. “The more you tell this story, the more it becomes believable, and that helps your legacy and legitimacy.”

And for those who see the photographed painting in the news, the artwork debunks the notion of Afghanistan as a graveyard of empires, according to Azad. Durrānī created one of the last central Asian empires, based in Kandahar.

“That painting does a lot to bring some focus that Afghan history is not 40 years since the Soviet invasion. Regardless if it’s myth or whatnot, that painting shows there is something older than Dan Rather flying in and looking like an Afghan and covering the Afghan war,” he said.

“That’s where the power of art is.” 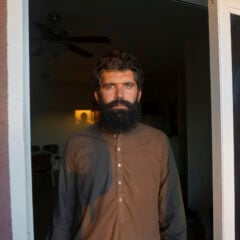