(RNS) — J. Dana Trent is best known for a series of books in which she has expounded on faith, love and grief from the perspective of a Southern minister eager to win over readers with inspired messages about finding meaning, slowing down and mourning loss.

But in a new podcast, this ordained Baptist minister and instructor in world religions strips away the polished, wholesome facade to reveal a painful past. Trent grew up in a trailer in the small town of Dana, Indiana, the daughter of parents who sold and used drugs.

“Breaking Good,” a four-part podcast produced in conjunction with the Lilly Endowment-funded Louisville Institute, tells a complex story of a dysfunctional churchgoing family living in a fading railroad town beset by poverty, addiction and mental illness.

Trent’s grandparents were pillars of the town’s nondenominational Bible church and made sure she attended every Sunday. Her parents, however, were hooked on megachurch pastor Robert Schuller, the apostle of positive thinking, whom they watched on TV.

Trent’s parents followed Schuller to Los Angeles to be closer to his Crystal Cathedral, hoping his message of self-healing and self-empowerment would allow them to conceive a child. About a year later, Trent was born in Los Angeles and named for the Indiana town where her father was from.  (The town’s singular claim to fame is that it is the birthplace of World War II newspaper columnist Ernie Pyle.)

RELATED: J. Dana Trent is on a mission to discuss death with the post-millennial generation But the family went broke 18 months into their LA stay and returned to Dana, Indiana. There, Trent’s father enlisted his young daughter as a helper and lookout for his fledgling drug-trafficking business.

He gave her a code name, “Budgie,” and taught her to trust no one.

In exploring this darker side of her life, Trent said she was interested in truth-telling.

“The more people are willing to talk about it, that gives other people permission to talk about it in their own communities and families,” Trent said. (Both her mother and father have since died, and that freed Trent to talk about them.)

A graduate of Duke Divinity School and a former hospital chaplain, Trent now teaches world religions at Wake Technical Community College in Raleigh, North Carolina. But she has devoted the past 10 years to writing — about her interfaith marriage to a former Hindu monk, about Christian meditation, about making time for Sabbath and about preparing for death. 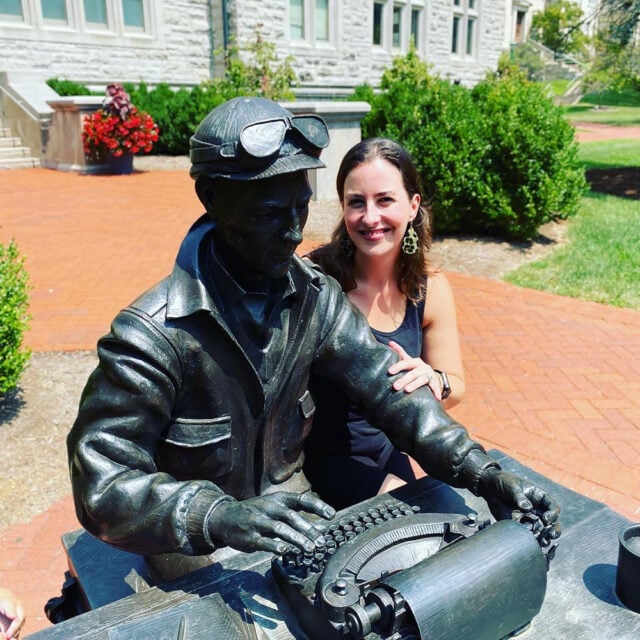 Her new project is grittier and more raw.

On the podcast, she describes how from the time she was a toddler, she separated cannabis plant stems from seeds. She learned to use a razor to cut bricks of hashish into smaller baggies. And she and her father would load the trunk of their car with large amounts of drugs, often stashing them inside the bowels of coin-operated kiddie rides as part of an interstate trafficking operation.

At age 6, Trent’s parents divorced and she moved to her mother’s home state of North Carolina. But she still traveled back to Indiana to spend summers with her father. That stopped at age 12, when his mental health declined.

“He was tearing out trailers and cars and was super duper paranoid with lots of suicidal threats,” she said.

A recreational therapist by training, Trent’s father was diagnosed with schizoaffective disorder. Trent continued to summer in Dana and see her father, but now stayed with her grandparents.

Her mother had mental illness too. The couple met in a locked inpatient psychiatric institute four years before she was born. They loved to tell the story of snorting cocaine on their wedding night, Trent said.

Despite their troubles, the couple had a sincere Christian faith. Trent’s father kept a King James Version of the Bible open on the scratched-up kitchen counter where he and his daughter bagged drugs. He was fond of quoting from Leviticus.

Trent’s mother wanted nothing more than for her daughter to become a minister. She called her “Revy,” and got her involved in Baptist churches in North Carolina. “If I did not know her personally and I read this, I would have thought, ‘Come on. This is fiction,’” said Sally Bates, a retired chaplain at Duke Divinity School who hired Trent as her administrative assistant years ago. “But I can attest: This is the real deal.”

The podcast is part of a larger grant Trent received from the Louisville Institute to examine how the church could respond to poverty-stricken rural towns such as Dana. In the midst of her family’s chaos, church provided Trent a stabilizing influence.

She thinks religious congregations could provide a ballast to other children if they venture out of their buildings and collaborate in innovative ways.

“One church community is not going to be able to address the huge problems of poverty, substance abuse and mental illness,” Trent said. “But if they all work together they can pool their resources to make something ecumenical and open to anyone.”

Last year, Trent helped the town of Dana win a $20,000 grant to renovate a baseball field and a $10,000 grant to study the feasibility of converting a town garage building into a multipurpose community center.

“What she’s doing is busting illusions, which is how we get to healing,” said the Rev. Michael Mather, pastor of First United Methodist Church of Boulder, Colorado, and a member of the Louisville Institute’s advisory board. “We in the church often do a good job of pretending everything is all right, and her story was telling the truth of what was actually going on.”

Trent is now revising a book version of the podcast that will tell the story in greater depth. Diving into her scarred past has been difficult. Trent’s mother trained her to put on appearances.

She’s aiming for a more honest accounting of lived faith.

“I have lived that shiny, well-edited veneer of faith,” she said. “I’m starting to strip off those layers.”

News
New book examines the religious lives of people without homes
Follow us on Facebook!
Submit your photos to RNS