(RNS) — Kirk Franklin, like many musicians, has pivoted to online performances during the COVID-19 pandemic.

The 16-Grammy winner brought his contemporary gospel music to NPR’s Tiny Desk, and he took part in a virtual benefit to draw attention to poor children across the world whose lives have been changed by COVID-19.

On Friday (Sept. 24), Franklin’s entertainment company and Compassion International jointly rereleased a remake of his “Lean on Me” single featuring a virtual choir of more than 120 youth who live in 25 countries where the humanitarian organization has a presence.

In their native tongues — more than a dozen including English, Creole, Tagalog and Thai — they sing “don’t worry,” in the song’s vamp where the words are featured repeatedly.

Franklin, who traveled with Compassion to the Dominican Republic in early 2020, said he sought to be a musical and a personal role model, giving hope to poor children, many of whom “have had very challenging living situations” during the pandemic.

“You have hundreds of kids that are living in marginalized situations, that are living in high levels of poverty, that this song is giving them an opportunity to have a voice,” he said. “You should have seen the tears coming from these kids’ eyes, of just hearing how I was adopted and how I was abandoned and how my mother and father did not raise me. And for these kids to go, man, that’s my story and look at how God changed your life.”

Compassion will receive proceeds from streams and sales of the song, which is also featured in a new video.

Franklin talked to Religion News Service about the project, its message and what he learned from the young participants. 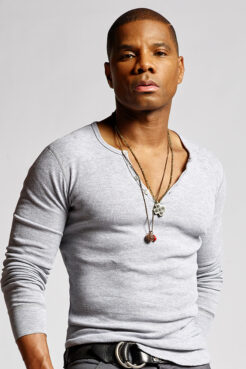 When you first released the song in 1998, did you think of it as having a global reach or a global message?

No, no. You never know. I think that’s what’s so cool about God, is that he’s got this sovereign plan that doesn’t have an expiration date.

In the recording the kids sing the words, “Don’t worry.” Do you think those words are too easy a message in these tough times, or rather, what you think people need to hear?

I think there always has to be a duality. There’s enough commentary to be able to give us a picture of the bigger, deeper issues of the areas of the injustice in many of the governments that continue to plague these kids, in the policies all over the world. I think we are very clear of those deeply embedded issues that continue to institutionalize people not only socially but also economically. And so when you’re a little kid, you may not understand all of the language to what those variables are. And so as a young child, your language has to be in a capacity where you’re able to digest it and to be able to communicate it back.

So a simple message is needed for people this young going through problems so big.

Yeah, that the message fits the messenger. If we were at the U.N. and if this was (President Joe) Biden, and he was addressing the U.N., if this was Biden landing in Haiti, and his words to the people were “Don’t worry.” Yeah, then, of course, that’s problematic.

How did your rehearsing compare to your directing in-person choirs in the past?

There’s no way I could have personally directed 150, 200 kids. But I did have initial Zoom calls with different countries. On those calls would be 20, 30 kids in that country. And so I personally was on Zoom calls with every country that is represented in this video.

During those calls, were you mostly talking or were there music lessons?

I would have music conversations. I would talk about notes and pitch and, just because there were language barriers, how to be able to kind of pronounce it, how to make the (English) words flow. There were times I would send reference tracks so they could be able to learn and practice with the reference tracks.

Was there a lesson you learned from not only talking but leading these children in song?

The greatest lesson for me, man, is how God can take any pain in a person’s life and use it for a beautiful melody to be able to reach others. I think when we are in the middle of our painful situation, it is very difficult to be able to see the hand of God and so we must trust the heart of God. These kids are going through some of the most painful and darkest moments — that most American humans cannot even handle. In Western Christianity and within Western culture, our brand of success and survival has not even equipped us (for) some of the PTSD that millions of these kids live in every day on this planet.

Earlier this year you apologized for an obscenity-laced audio when you and your oldest son Kerrion had an argument. Was a lesson learned there for you and how are things going now with your family?

The lesson for me is that it is a beautiful thing when you’re able to get these kids together to sing a song of unity. I continue to ask people to just continue to pray for me and my family.

And also the last time we talked, you said the conversations between you and Trinity Broadcasting Network were continuing regarding your boycott of the Gospel Music Association’s Dove Awards. Has anything come of that lately or is your boycott continuing?

I will continue to pray for my steps as I continue to maneuver through real-time situations that continue to face us here in America as Americans and even as African Americans, as we continue to really have the desire to make sure the light and love of Jesus Christ is reflected in every platform we live in.

News
CeCe Winans first Black female soloist to win Artist of the Year at Dove Awards
Follow us on Facebook!
Submit your photos to RNS