(RNS) — In the nearly 10 months since COVID-19 vaccines were made available to the public, white evangelicals have been more opposed than any other group in American society to taking the shot, with more than 20% — at least 13 million people — refusing the vaccination, according to a study by the Kaiser Family Foundation.

Though there are no numbers to quantify it, it’s also clear that evangelicals are upset with President Joe Biden’s recently announced vaccine and testing mandates for all companies with more than 100 workers.

In August, when New Mexico Gov. Michelle Lujan Grisham responded to a surge in delta variant infections by pushing hard for vaccines and reissuing the state’s mask mandate, Skip Heitzig, pastor of Calvary Church in Albuquerque, one of the largest churches in the United States, issued a statement saying his congregation would not comply.

We’re used to this kind of response by now, and even expect it from conservative Christians. Most observers understand the movement today as based in individualism, capitalism and personal flourishing.

But conservatism was not always so based in individualism or a lack of concern for the other. Until the rise of Ronald Reagan in 1980 — a president evangelicals still lionize and whose election they were essential in bringing about — American conservatism and the Republican Party had more to do with defending tradition, an objective moral order and mutual obligation. 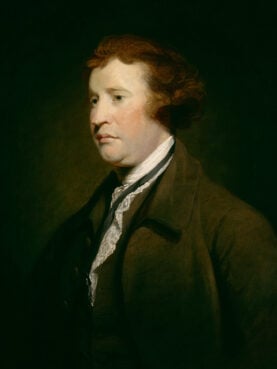 Portrait of Edmund Burke, by the studio of Joshua Reynolds. Image courtesy of Creative Commons

The patron saint of conservatism before Reagan was the 18th-century Irish statesman Edmund Burke, a philosopher who developed a social contract theory in response to the horrors of the French Revolution. Burke prized liberty, hierarchy and tradition. He insisted that humans take into account not only what one owes to the present generation (or one’s own family), but also pay proper deference to those who came before, and those who will come after.

His philosophy was reminiscent of Jesus’ admonition that individuals should “do unto others as they would have done unto themselves,” but extended out to embrace all humans, across all time periods. Burke’s philosophy was unmistakably interested in concern for one’s neighbor, friend and fellow citizen. Unimpeded selfhood, he thought, would lead to social animosity and then total social unraveling.

Reagan and Republican leaders who have come after him have paid less heed to Burke than to the conservative economic philosophy of Friedrich von Hayek and Milton Friedman, who say the government should leave people alone and let individuals decide for themselves how to behave. Requiring people to be obligated to one another, according to their approach, champions coercion.

Of course, it is rare to hear evangelicals argue so starkly against goodness or charity. But as their response to the vaccine shows, evangelicals no longer emphasize mutual obligation in their public rhetoric, focusing instead on their own cultural losses. The resulting hostility has festered into a refusal to act beyond their own front door. Serving others is a good thing that people might choose, but it’s not a good thing that God requires.

To criticize evangelical believers for their vaccine resistance by decrying an overemphasis on personal freedom misses the real point: They need to restore a more inclusive rendering of what it means to be a conservative. To use a quote often misattributed to Burke but powerful nevertheless, “The only thing necessary for the triumph of evil is for good men to do nothing.”

In this case doing nothing means refusing the vaccine while spurning masks, and so letting the virus continue to rage.

If they would remember their Burkean roots, conservatives could use the mutual obligation inherent in the COVID-19 vaccine as a balm for our divided nation. They might once again understand politics as the art of creating a unitary social world. Liberals, meanwhile, who like nothing more than a commitment to equality and equity in health and economics, would find a dedication to widespread vaccination irresistible, an entree to moving forward together, even as differences remained over particular policies.

Some evangelicals have already gotten there. As Kay Warren, wife of evangelical superstar pastor Rick Warren, wrote last January, after getting her shot, “Those of you determined to find fault in a simple health decision, see nefarious motives where there are none. … Beware of destroying one another.”

Edmund Burke could not have said it better himself.

(Stephanie A. Martin is associate professor of political communication at Southern Methodist University and author of “Decoding the Digital Church: Evangelical Storytelling and the Election of Donald J. Trump.” The views expressed in this commentary do not necessarily reflect those of Religion News Service.)