(RNS) — Richard Rorty, the late philosophy professor, once claimed that religion is a “conversation stopper” — the ideal way to end any debate.

For instance, if someone says in a debate, “It’s against God’s law for anyone to abort their child,” there’s no real way to move forward with the conversation if the discussion partner does not have the same theological perspective.

The conversation is, for all intents and purposes, over.

There is some data to support Rorty’s claim — at least for some segments of American culture. In 2019, the Public Religion Research Institute in its American Values Survey asked respondents to react to two statements that seem to summarize, fairly succinctly, the two extremes of the religious debate.

The first was this: “Religion causes more problems in society than it solves.” The second was: “It is necessary to believe in God in order to be moral and have good values.”

As you might guess, there are strong feelings about these statements, especially among groups at different ends of the religious and political spectrum. “Religion Causes More Problems in Society than it Solves.” Graphic by Ryan Burge

For example, most atheists (87.9%) believe religion causes more problems than it solves. So do many agnostics (71%) and more than half of the Americans who claim no religion in particular (59.8%). Few evangelical Christians (18.4%) or Catholics (23.7%) would agree. People from other world religions are split (52.2%)

“Religion Causes More Problems in Society than it Solves.” Graphic by Ryan Burge

All told, however, just a third of all Americans believe that religion is a net negative in American society, and only 1 in 10 completely agrees that “religion causes more problems in society than it solves.”

There is a clear partisan divide, however. Only 20% of Republicans think religion is a negative force in American society, while 45% of Democrats hold the same position. It is noteworthy that a majority of all groups still see religion as good for American life.

“It is necessary to believe in God in order to be moral and have good values.” Graphic by Ryan Burge

On the question of whether it is necessary for people to believe in God to be moral and have good values, there’s also widespread support for the sentiment that people can be good without God. Of the entire sample, about 60% believed that those who didn’t believe in God could still be moral citizens. Those numbers aren’t much different for Democrats or independents. However, a slim majority of Republicans (56%) do believe that it’s not possible to be moral without a belief in God. 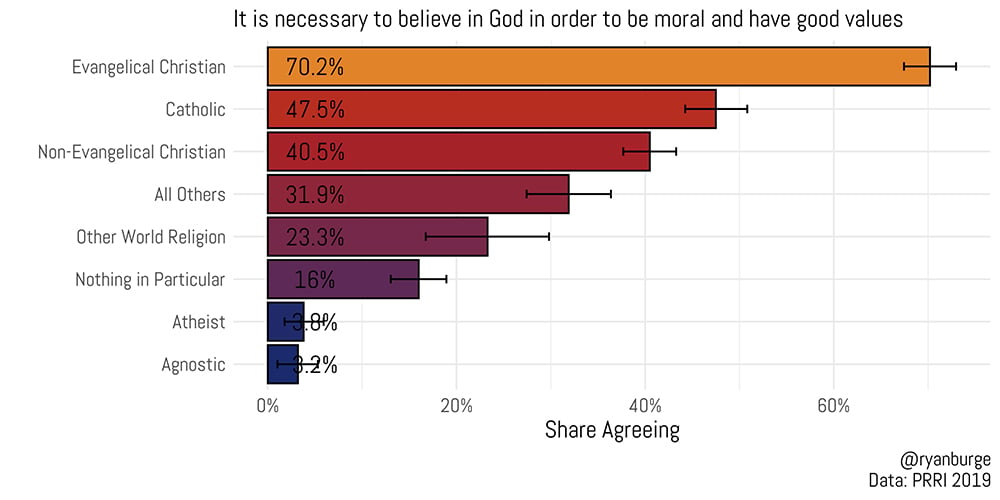 “It is necessary to believe in God in order to be moral and have good values.” Graphic by Ryan Burge

On the question of whether someone has to believe in God to be moral, there’s a very stark polarization that occurs in the data. Seventy percent of evangelical Christians agree that it’s not possible to be good without God. That same sentiment is only shared by 3% of atheists or agnostics. But, among other groups, there’s much more ambivalence. For instance, 48% of Catholics say that a person cannot be moral and not believe in God, a view that is shared by 41% of nonevangelical Christians.

There’s more nuance when you look at the two questions together. Clearly, atheists are almost in unanimous agreement: 85% of them believe that religion is harmful and that a person can be moral without believing in God. Those two positions are shared by 70% of agnostics, a slim majority of nothing in particulars. 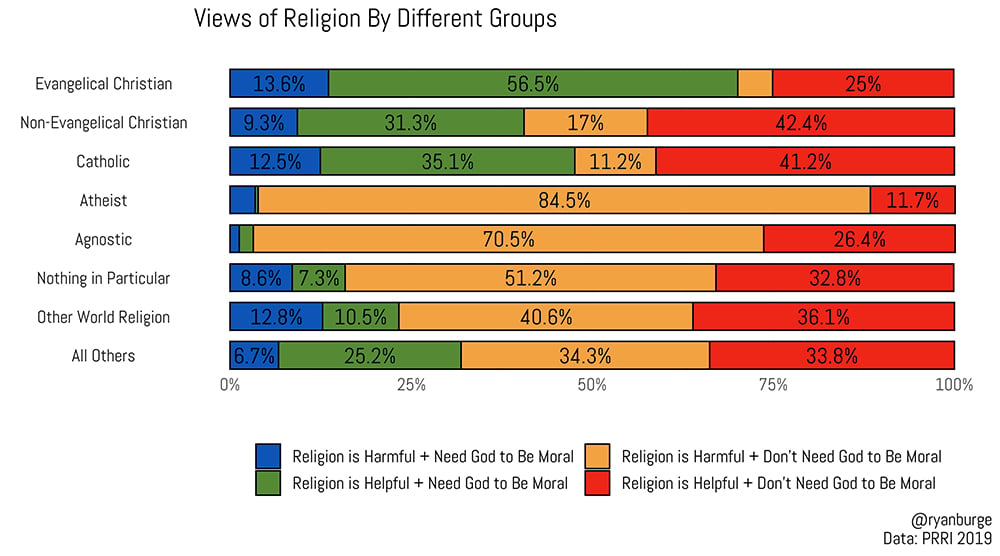 “Views of Religion By Different Groups.” Graphic by Ryan Burge

However, among evangelicals, there’s a bit more diversity in beliefs.

It’s fair to say that these two questions together can generate two absolutist positions: One is that religion is bad and God is not necessary for morality. The other is that religion is good and that it’s impossible to be a good person without God. In the case of the anti-religion position, that is the overwhelming view among atheists and agnostics (85% and 71% respectively). On the other hand, the absolutist position in favor of religion describes about 57% of evangelicals, with only about a third of other Christians taking this stance, as well.

Discussions of tolerance or intolerance are always an exercise in perspective. Most Americans think religion is a good thing, while a growing number believe a person can be good without God.

The extremes don’t reflect that reality. Eighty-eight percent of atheists think that religion is harmful, while 70% of evangelicals think it’s impossible to be a person with good morals without a belief in God.

For these groups, Rorty’s statement seems true. Both sides see the other’s position as completely untenable, and very likely immoral. So there’s no room for conversation.

The rest of us, however, might have something to talk about.

RELATED: When it comes to building trust, belonging beats belief

Donate Now!
Posted in
Ahead of the TrendChristianityEvangelicalFaithOpinionProtestantUnaffiliated/Atheism