(RNS) — For months, the American people have been calling for national standards to protect our freedom to vote safely and freely and to make sure every vote is counted, regardless of the state we live in. More than 400 voter suppression bills in 49 states have been introduced to deliberately deny our freedom to vote. Legislatures in nearly half of those states have already passed laws that make it harder for eligible voters to cast their ballots.

Each of us has a voice in our country. That voice is our vote. Our vote cannot speak if it is denied. For decades, engaged citizens and our best elected leaders have worked together tirelessly to extend the right to vote to more and more American citizens. To see that progress rolled back is both a cause for alarm and a call to action.

Our vote is a covenant, a promise that binds our government to listen to all our voices. That promise is not a right-versus-left issue but a moral calling that every one of our leaders must heed. We the people have stepped up. It’s now time for our leaders to do the same and exercise our majority by exercising theirs.

Right now, the voices of people of color, youth, the elderly, people with disabilities, people in poverty, people in rural areas, people in urban areas are all facing an onslaught of discrimination that undermines our freedom to vote. We are talking about a massive sabotage of our elections, undercutting the very tenet shared by all our faiths: that we are each equal in the eyes of the divine.

This onslaught of anti-voting laws must be stopped. That is why as faith leaders we call on every member of Congress to go on record about where they stand on voting rights. Because no matter which state you reside in, or what party you align with, no one should be able to pick and choose which votes matter. We are only a United States when all eligible voters in all 50 states can express their voice through their vote.

We stand together as faith leaders from six separate faith traditions to call on the Senate to pass two pieces of legislation that the majority of both Democrat and Republican voters support.

First, the John Lewis Voting Rights Advancement Act, H.R. 4 as it is known, specifically tackles voter suppression and discrimination by restoring voter protections and federal enforcement that were guaranteed by the Voting Rights Act of 1965.

The Voting Rights Act has been reauthorized by Congress with overwhelmingly bipartisan support and signed by presidents of both parties five times. In fact, when President Ronald Reagan reauthorized the Voting Rights Act in 1982, he pledged: “As long as I’m in a position to uphold the Constitution, no barrier will come between our citizens and the voting booth. And this bill is a vital part of fulfilling that pledge.”

But in 2013, the Supreme Court overreached and removed key aspects of the Voting Rights Act. As a result, states were given the opportunity to once again pass discriminatory laws that make it harder for American citizens to vote. The result? Four hundred voter suppression bills in 49 states. 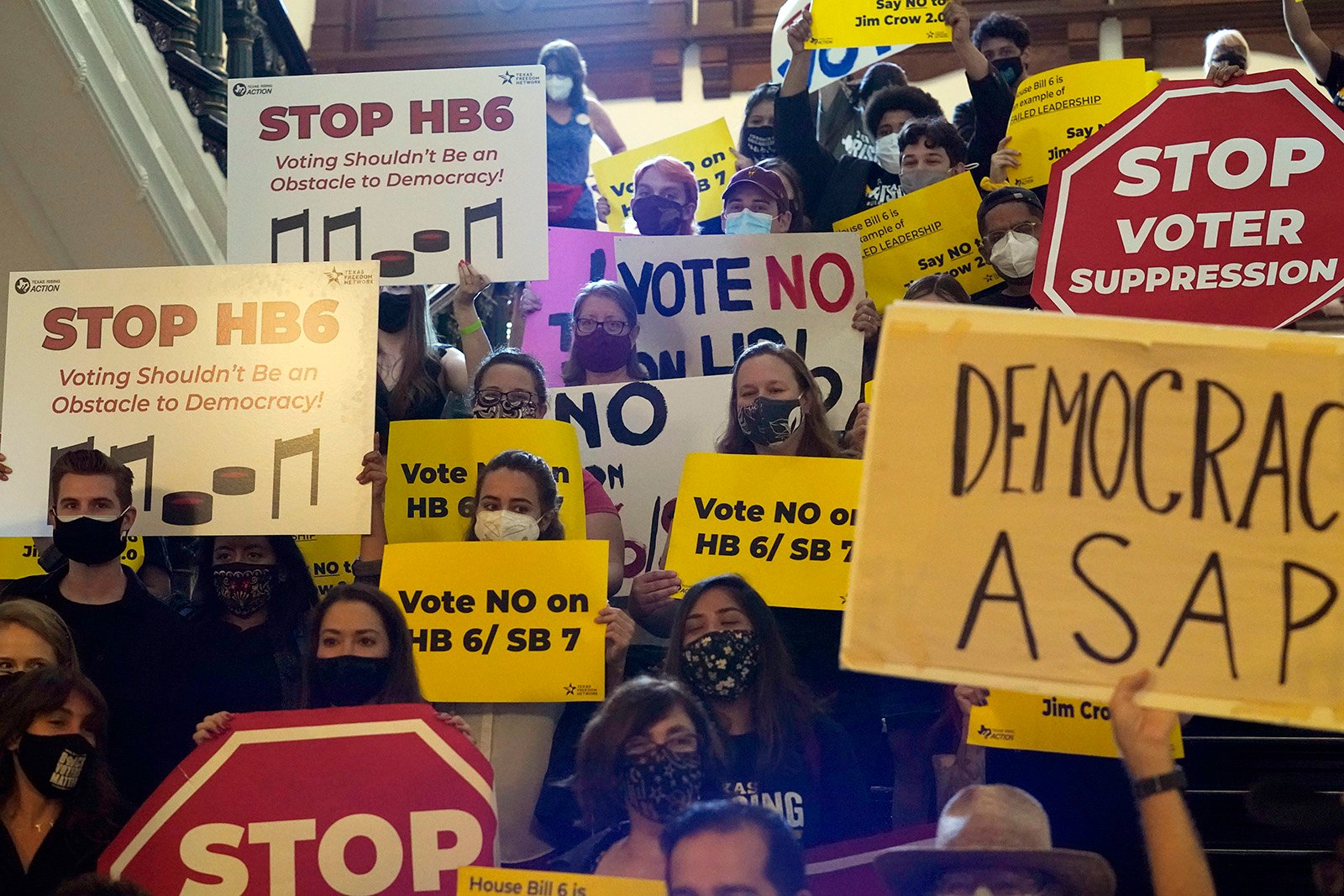 In this May 6, 2021, file photo, a group opposing new restrictive voter legislation gathers outside the House chamber at the Texas Capitol in Austin, Texas. (AP Photo/Eric Gay, File)

Thankfully, when one branch of our government overreaches, another can correct. Congress has the power to restore fundamental voter protections. As H.R. 4 awaits passage, eight senators have been hard at work this summer on the Freedom to Vote Act, sponsored by Sen. Amy Klobuchar with Sens. Tim Kaine, Angus King, Joe Manchin, Jeff Merkley, Alex Padilla, Jon Tester and our friend and fellow clergy, the Rev. Raphael Warnock, senator from Georgia.

The Freedom to Vote Act reflects feedback from state and local election officials whose responsibility it is to implement free and fair elections. It includes minimal national standards that can improve voter access by ensuring early voting and vote-by-mail for everyone. It ensures automatic voter registration. It safeguards elections against foreign interference. It makes Election Day a federal holiday. And it seeks to end partisan gerrymandering and special interest money. In states that require voter ID, it ensures that a broad range of voter verification will be accepted.

We sincerely hope that the John Lewis Voting Rights Advancement Act and the Freedom to Vote Act find the bipartisan congressional support America deserves and voters need. But if these voter protections continue to remain blocked by legislative shenanigans, we and other faith leaders will use our pulpits to demand that President Joe Biden use his pulpit — to unequivocally support curtailing the loopholes that stop common-sense voting rights legislation from being passed.

Millions of us are at risk of being silenced. Maybe your voice isn’t one being denied, not yet. But to be clear: When rights slip for some, history proves time and again that they slip for many. Will you be next? The truth is, you do not know. And then, as the poem goes, “then they came for me— and there was no one left to speak.”

Religion Hub
Biden brings a menorah lighting back to the White House, rededicating a Hanukkah tradition from the 20th century