(RNS) — A new survey of antisemitism on university campuses finds that one-third of Jewish students personally experienced anti-Jewish animus, whether online or in person.

But the survey also found that seven out of 10 Jewish students reported feeling safe on campus, and 67% said their campus was welcoming and supportive of Jewish students.

The survey, the first of its kind, was sponsored by the Anti-Defamation League in partnership with Hillel, the Jewish campus organization. It included a nationally representative sample of 756 Jewish undergraduates at 220 U.S. colleges and universities and had a margin of error of plus or minus 4%.

The survey, conducted online in July and August, reflected students’ experiences during the 2020-21 school year, which was mostly online because schools were closed due to the coronavirus pandemic. It showed that the most common form of antisemitism was offensive comments online. Only 1% of students were victims of antisemitic violence, and only 1% were threatened with violence.

In all, the survey found 43% of Jewish college students had experienced and/or witnessed antisemitic activity in the past year. Among those who witnessed it, the most common experience was seeing swastikas around campus or vandalism to Jewish fraternities, sororities and cultural buildings. 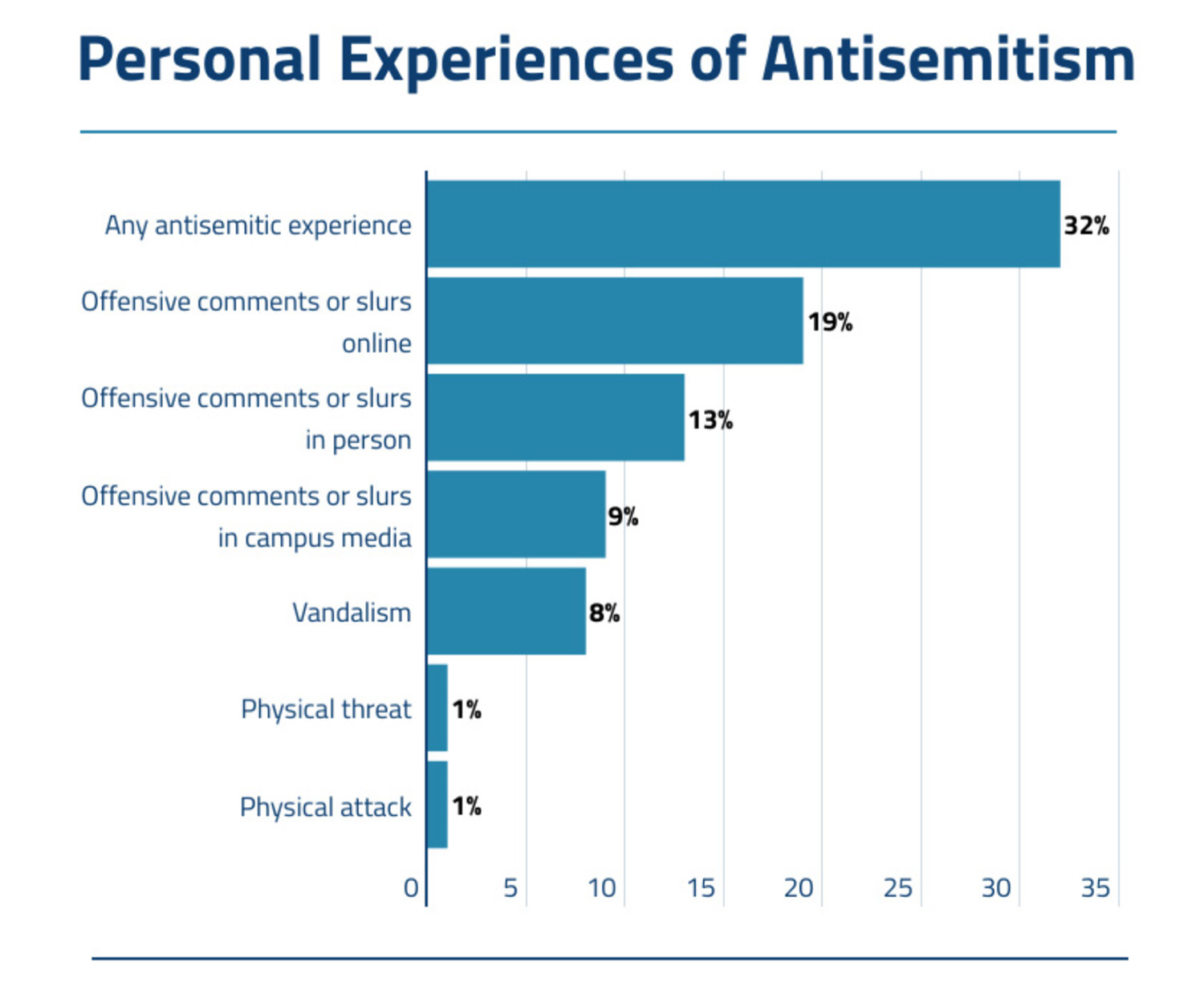 “The fact that one out of three students has personally experienced antisemitism suggests there’s a need for the entire campus community to work together to address this issue and to ensure our students are able to live and study in a safe and welcoming environment,” said Matthew Berger, vice president of external affairs and campus preparedness for Hillel International.

There has been a surge of hostile sentiment directed against Jewish students in recent years, mostly a byproduct of animosity, generally from liberal-leaning students, toward Israel’s policies with respect to Palestinians. Jewish students have claimed they are harassed, made to feel unwelcome or punished for their views on Israel when they ask to join student clubs, councils or other groups.

But when asked where on the political spectrum the antisemitism was coming from, 69% of Jewish students said they experienced it from those who identify as conservative or with the right; 62% said they were concerned with antisemitism from the left.

Hillel, which has a presence on 550 college campuses in North America, has stepped up its response to antisemitism with a number of programs.

This month, it launched an “Own Your Star” campaign encouraging students to wear a Star of David necklace or post a photo to social media wearing it. 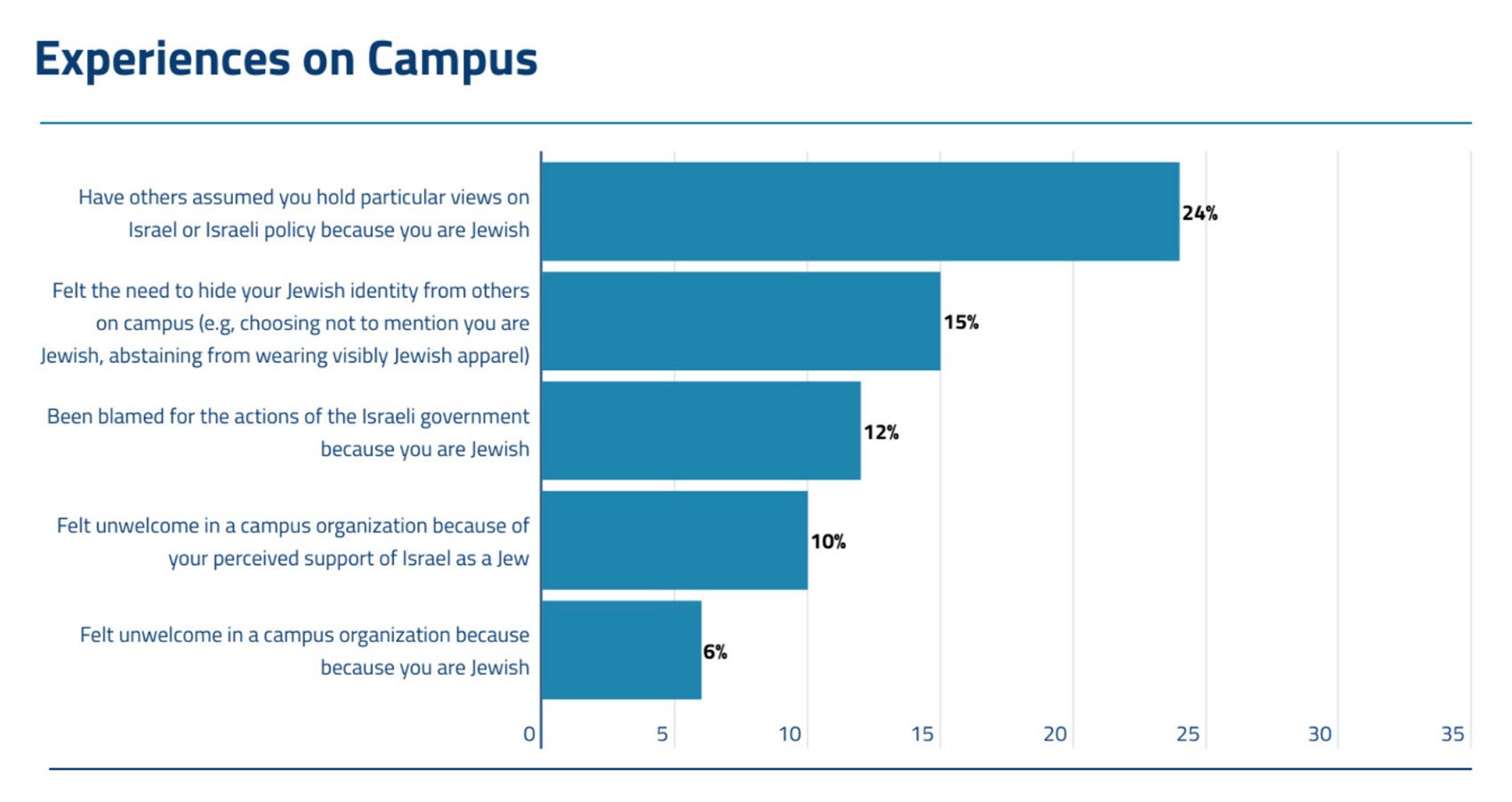 Last year, Hillel launched a Campus Climate Initiative to educate campus administrators about the Jewish community and antisemitism. Berger said 27 schools have partnered with Hillel on the program now in its second year. It encourages universities to incorporate antisemitism awareness into diversity, equity and inclusion strategies on campus.

The survey found that three-quarters of respondents who personally experienced antisemitism did not report it to anyone and that 41% of respondents said they did not know how to report an antisemitic incident when it occurs.

Hillel has been working with the ADL and the Secure Community Network, another organization, on that, too.

A website called ReportCampusHate.org is designed to give students an easy-to-access site to report antisemitic activity and get connected with a Hillel professional on campus to help guide them through the bias incident reporting process.

“It’s very complicated when a student wants to report antisemitic incidents,” said Berger. “You can report to the university, to the Jewish community, to law enforcement. We want to provide a support structure for students to know they can go to one place and we can help them navigate that so it’s tracked properly, and more important that they get the support they need.”