(The Conversation) — Almost half of U.S. congregations participate in some kind of food distribution program. While the government’s Supplemental Nutritional Assistance Program was helping nearly 42 million Americans purchase groceries in mid-2021, those benefits often don’t cover the full food costs of people facing economic hardship. And not everyone who needs food is eligible for those benefits.

Food banks, food pantries, meal programs and similar initiatives run by churches, synagogues, mosques and other faith-based institutions are among the charitable organizations seeking to fill this gap.

As a social scientist who studies the economic impact of community-based organizations, I have seen even small efforts by local congregations make an outsized difference for people who are experiencing food insecurity – meaning they can’t get enough nutritious food to eat.

Building on my research with Karen Flórez and Kathryn Derose, I have tracked the important role congregations play in getting food to the people who need it. I analyzed data collected through the National Congregations Study – a nationally representative survey of congregations.

This data indicates that in 2018, 48% of U.S. congregations either had their own food-distribution program or supported efforts run by another organization, such as a food bank or food pantry. That’s over 150,000 congregations.

Unlike government programs, these faith-based efforts generally provide help immediately to anyone who shows up, with no questions asked. For example, the Laboratory Church in Indianapolis runs a mobile food pantry. Like most congregation-based food programs, it requires “no qualifications” or extensive paperwork to receive food.

The share of households in this country experiencing food insecurity has ranged from 10% to 15% since 1995. Surprisingly, the problem did not worsen in 2020 despite the economic upheaval triggered by the COVID-19 pandemic. The share of food-insecure households stood at 10.5% in 2020, the same level as a year earlier.

One major reason why food insecurity didn’t grow was that the government stepped up. It distributed several rounds of relief and stimulus payments, spent more on SNAP and expanded unemployment benefits.

That aid increase is now drying up. The federal government ended the extra jobless benefits that were keeping many families afloat. States are also starting to put SNAP benefits back on a sliding scale, rather than giving everyone who gets them the maximum level allowed.

With additional help waning and inflation rising, the Biden administration is boosting aid to those in need by permanently increasing the average SNAP benefits above pre-pandemic levels.

However, that change won’t help people who aren’t eligible for those benefits, including immigrants and refugees who have been in the country legally for less than five years.

Some congregations focus on serving immigrants by providing legal assistance, language instruction or help finding jobs. These congregations are the most likely to have food programs: 66% of them are addressing food needs, compared to 48% nationally.

On a scale small and large

Consider Crossroads Community Baptist Church in Whitley City, Kentucky, one of the poorest communities in America. The population of this Appalachian town is about 1,200 people, and the church’s food ministry, the Lord’s Café, gives free groceries to about 400 families. Also, when local kids are out of school in the summer, it feeds lunch to 250 children a day, three days a week.

The Crossroads Church in Cincinnati, a megachurch, operates on a bigger scale. It plans to deliver more than 100,000 Thanksgiving meals to those in need in 2021.

And Christian churches aren’t the only faith-based groups stepping up to feed the hungry. At the East Plano Islamic Center in Texas, local residents can pick up what they need from a drive-thru food pantry every Saturday. Similarly, Temple Beth Shalom in Austin, Texas, a Reform Jewish congregation, partners with Meals on Wheels to deliver meals to homebound, disabled and other people who need them.

These efforts are motivated by compassion for the hungry. As the economy bounces back, the government will keep playing a vital role in meeting the needs of Americans. So will thousands of local congregations whose efforts and impact often go unacknowledged.

(Brad R. Fulton, Associate Professor of Nonprofit Management, Indiana University. The views expressed in this commentary do not necessarily reflect those of Religion News Service.) 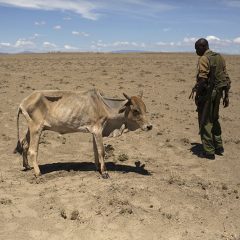 Arts & Culture
Kenya’s Catholic Church to fight hunger by farming its vast land reserves
Ethics
COMMENTARY: Cutting food stamps is a bad way to balance the budget
Follow us on Facebook!
Submit your photos to RNS