(The Conversation) — Albino Luciano, better known to the world as Pope John Paul I, reigned as pope for only 34 days before his death in September 1978. But he will soon join the ranks of 20th-century popes who the Catholic Church has canonized. This literally means they have been entered on the “canon,” or list, of people formally declared to be in heaven and have been granted the title “Blessed” or “Saint.”

The process requires a rigorous examination of the life and holiness of a candidate and involves several stages that can last years or even centuries.

After someone with a reputation for exceptional holiness dies, a bishop can open an investigation into their life. At this stage, the person can be granted the title “Servant of God.” Further details and research are needed for them to be recognized as “Venerable,” the next stage in canonization.

The following step is beatification, when someone is declared “Blessed.” This usually requires that the Vatican confirm that the person performed a “miracle” by interceding with God. Two miracles are required before a “Blessed” can be declared a saint.

What, then, is a miracle?

The word is used widely in nonreligious ways. However, the Catechism of the Catholic Church, which sums up the church’s teachings, defines it as “a sign or wonder such as a healing, or control of nature, which can only be attributed to divine power.”

In the canonization process, a miracle almost always refers to the spontaneous and lasting remission of a serious, life-threatening medical condition. The healing must have taken place in ways that the best-informed scientific knowledge cannot account for and follow prayers to the holy person.

Pope John Paul I’s beatification was greenlighted by the sudden healing of an 11-year-old girl in Buenos Aires who had been suffering severe acute brain inflammation, severe epilepsy and septic shock. She had been approaching what doctors considered almost-certain death in 2011 when her mother, nursing staff and a priest began praying desperately to the former pope.

Catholic belief in miracles is long-standing and rooted in what the church believes about the life and work of Jesus of Nazareth. The Gospels portray Jesus as a teacher, but also as a wonder-worker who turned water into wine, walked on water and fed a large crowd with minimal food.

As a Catholic theologian and professor, I have written about saints, especially the Virgin Mary, and taught university courses on hagiography, or writing about saints’ lives. In Catholic tradition, miracles represent more than physical healing. They also confirm what Jesus preached: that God is willing to intervene in people’s lives and can take away their suffering.

For Christians, then, Jesus’ miracles suggest strongly that he is Son of God. They point to what Jesus called “the reign of God,” in which Christians hope to be reunited with God in a world restored to its original perfection. 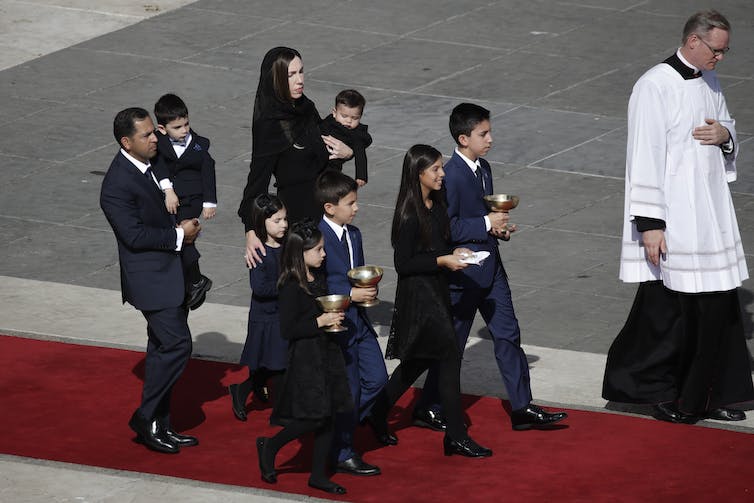 Melissa Villalobos walks with her family during a canonization Mass at the Vatican in 2019. She experienced a healing after praying to Cardinal John Henry Newman, and the Catholic Church recognized it as a miracle, clearing the way for Newman’s canonization.
AP Photo/Alessandra Tarantino

Naturally, thoughtful people can object to the claimed supernatural origin of such events. And the development of medical science means that some healing processes can indeed now be explained purely as the work of nature, without needing to claim that divine intervention has been at work. Some Christian writers, notably the Protestant theologian Rudolf Bultmann, have also interpreted Jesus’ miracles as having a purely symbolic meaning and rejected them as being necessarily historical, literal truth.

The Catholic Church has for centuries held that science and faith are not sworn enemies but rather different ways of knowing which complement each other. That understanding guides investigations of supposed miracles, which are undertaken by the Vatican’s Congregation for the Causes of Saints, which has about two dozen staff and more than 100 clerical members and counselors.

Theologians working for the Congregation assess all aspects of the life of a candidate for canonization. These include the “Promoter of the Faith” (sometimes called “the Devil’s advocate”), whose role was changed in 1983 from finding arguments against canonization to supervising the process.

Separately, a medical board of independent scientific experts is appointed to investigate a claimed miracle. They begin by looking for purely natural explanations as they review the medical history.

The process of canonization has undergone continuous revisions throughout history.

In 2016, Pope Francis initiated reforms in how the church assesses miracles, which are meant to make the process more rigorous and transparent.

The Catholic groups who request to open a canonization case for a particular person fund the investigation. Costs include fees paid to medical experts for their time, administrative expenses and research. But cases were often opaque and expensive, reaching well into the hundreds of thousands of dollars, Italian journalist Gianluigi Nuzzi wrote in a 2015 book.

Among Francis’ 2016 reforms was a new rule that all payments be made by traceable bank transfer so groups can better track the Vatican’s spending.

Another of Francis’ reforms is that in order for a canonization case to go forward, two-thirds of the medical board are required to affirm that the miraculous event cannot be explained by natural causes. Previously, only a simple majority was needed.

The overall point of these reforms is to protect the integrity of the canonization process and avoid mistakes or scandals that would discredit the church or mislead believers.

Since Catholics believe that the “Blesseds” and saints are in heaven and intercede before God on behalf of people who seek their help, the question of miracles is a matter of being confident that prayers can and will be heard.