(RNS) — On the homestretch of Virginia’s nail-biter of a governor’s race, Republican candidate Glenn Youngkin has been looking for a way to simultaneously present himself as part of the old corporate wing of the GOP who might have crossover appeal, while not alienating the base of the party that is now wholly owned by Donald Trump. A key rhetorical move, now a standard applause line in his stump speech, is a promise to “ban” critical race theory from Virginia public schools “from day one.”

Before I go any further, I want to unpack the Ivey tweet, which is instructive for how this is playing out. First, “ALABAMA!” This is the state whose rampant racism and entrenched Jim Crow segregation laws prompted the Rev. Martin Luther King Jr. to organize civil rights protests there and pen “Letter from Birmingham Jail”; a state whose constitution included a ban on interracial marriage until a statewide vote in 2000; and a state whose governors, including Ivey, are still sworn in with the same Bible used to inaugurate Jefferson Davis as the president of the Confederacy.

And there’s Ivey’s own track record. Shortly after her election, Ivey herself had to apologize for wearing blackface, donning overalls and participating in a minstrel skit at an event sponsored by the Baptist Student Union — the student organization affiliated with the Southern Baptist Convention — when she was a student at Auburn University. In her apology, she declared, “I want to do all I can, going forward, to help show the nation that the Alabama of today is a far cry from the Alabama of the 1960s.” But that was then.

What about Ivey’s claim to have “banned CRT in Alabama”? It turns out this assertion is not based on a new state law, nor any other policy that explicitly mentions CRT. Rather, she’s referring to a policy passed by the Alabama State Board of Education, on which she serves as president, that now includes this statement in its administrative code: “The State Board of Education specifically prohibits each local board of education from offering K-12 instruction that indoctrinates students in social or political ideologies or theories that promote one race or sex above another.” That statement, however unremarkable, provides enough of a foothold to anchor the spectacular tweet above. And that’s the point.

Over the last year, following the nationwide protests for racial justice after the murder of George Floyd, Republican elected officials at the local, state and national levels began a coordinated effort to introduce a flurry of bills and policies that could be touted as banning “critical race theory.”

According to a study by The Brookings Institution, as of August 2021, eight states had passed and 20 states had introduced bills that are being promoted as banning CRT. As Brookings’ Senior Fellow Rashawn Ray noted, however, none of the laws that have passed mention CRT explicitly, but refer to a frighteningly broad and deliberately vague array of banned activity, such as “the discussion, training, and/or orientation that the U.S. is inherently racist as well as any discussions about conscious and unconscious bias, privilege, discrimination, and oppression.” Ray also notes these prohibitions often “extend beyond race to include gender lectures and discussions.” The Republican anti-CRT campaign is leading to some bizarre, even absurd, outcomes. In Oklahoma, Republican Gov. Kevin Stitt found himself banished from the Tulsa Race Massacre Commission after signing a bill that could be interpreted as banning the teaching of the very history the commission was working to uncover. Youngkin has taken to quoting MLK in support of banning CRT, even while such policies would have a clear chilling effect on teaching King’s works — at least his whole books rather than sanitized quotes taken out of context — to the next generation.

These efforts, because of their perceived effectiveness at energizing a white conservative and Christian Republican base, are likely to dominate not only the 2022 midterm elections and the 2024 presidential elections but also state and local elections and hyperlocal gatherings like school board meetings.

In addition to the deluge of legislative and policy efforts, there is strong evidence Fox News has played a role in familiarizing its audience with, and stoking fears about, this term that was mostly found, prior to this year, in graduate school syllabi. A recent study by Media Matters for America found “critical race theory” had been mentioned more than 1,900 times on the network over a 3 1/2-month period last summer, as fall legislative agendas were being set. Check out how tightly the mentions by month on Fox News (left-hand scale) track with Google trends data, which shows relative search interest in the term (right-hand scale), for the period of June 2020-June 2021. As a political and cultural tool to stoke racial resentment in the white base of the Republican Party, it seems to be enjoying some success. But something interesting — and hopeful — happens if you move away from the jargon to the underlying conflict, which is at root about what public schools should teach our children about American history and, by extension, what understanding the next generation will have of the American story. Despite the well publicized scenes of wild-eyed soccer moms screaming at suburban school board meetings, among the broader public, even across partisan and religious lines, there is surprisingly broad common ground.

In a large August PRRI survey of more than 5,000 respondents, we attempted to get underneath the CRT debates by testing a positive and negative statement about whether we should teach our children about the history of racism in the country:

We split the sample into two random subsamples, with one getting the positive statement and the other getting the negative statement. Even though the two statements were quarantined (i.e., each respondent was randomly assigned to receive only one of these questions), we found a remarkable convergence of opinion and surprising common ground across partisan and religious lines. 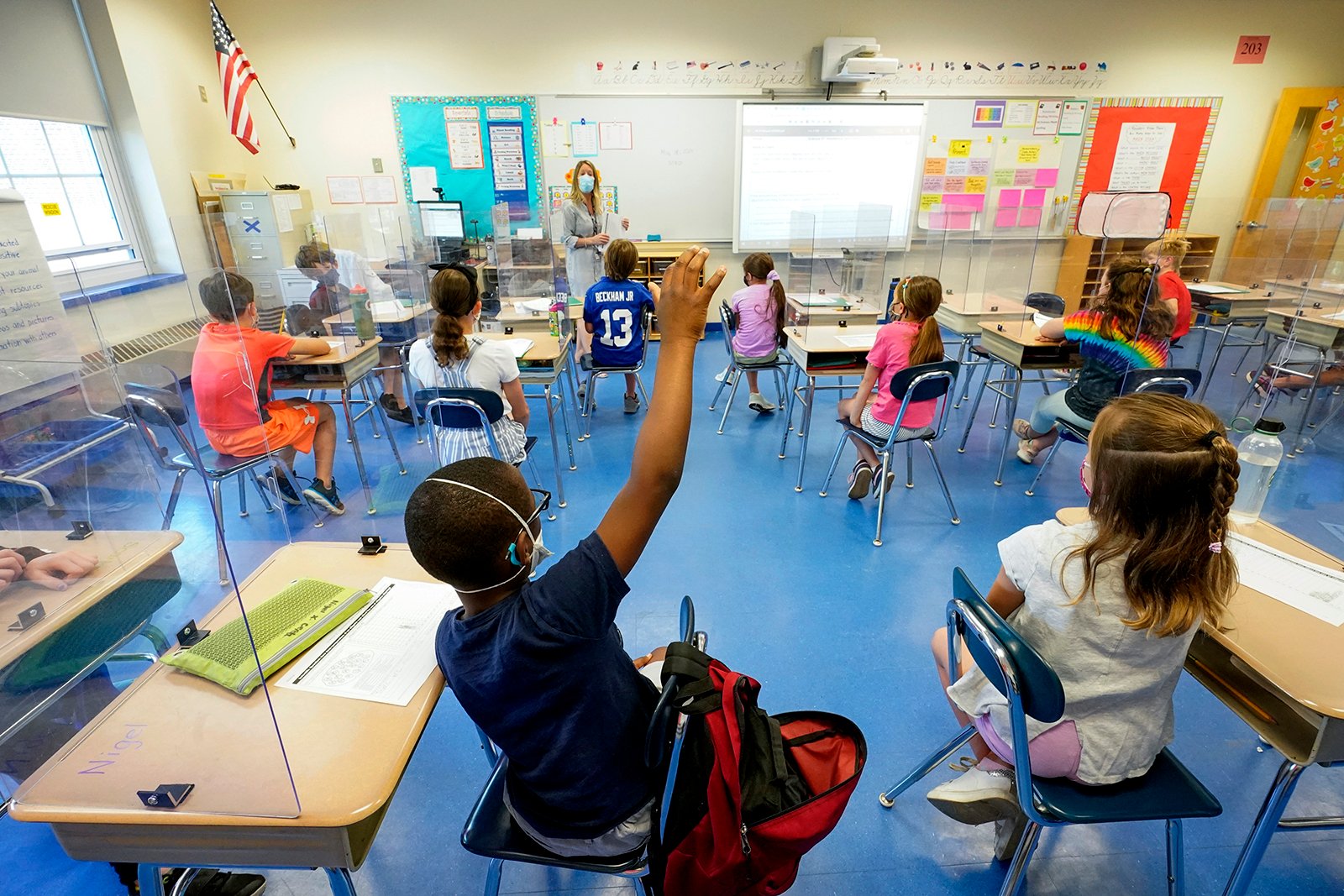 In this May 18, 2021, file photo, a teacher, center, and her third-grade students wear face masks and are socially distanced during class in Rye, New York. (AP Photo/Mary Altaffer, File)

More than three-quarters (76%) of Americans both agreed that teaching children about the history of racism in America will help our country move toward a healthier future and disagreed that it would hold our country back from making progress. Among Democrats, there is near consensus: 91% agreed teaching kids about the history of racism in America would be helpful, while 85% disagreed it would hold the country back.

While levels were lower among Republicans, the opinion patterns were similar: 57% agree that teaching children about the history of racism will help the country and 64% disagree that it would hold us back from making progress. Among Republicans, however, we can see the clear impact of the CRT media blitz. Republicans who most trust Fox News are divided on these questions, while Republicans who most trust mainstream news (e.g., CNN, broadcast networks) look more like Americans overall.

There is near consensus among religious groups as well. Even among white evangelical Protestants — who comprise around one-third of the Republican base nationwide and higher proportions in Southern states (e.g., 56% in Alabama) — 63% say teaching children about the history of racism will help our country move toward a healthier future and 70% disagree it will hold us back. “Teaching children about the history of racism in America will…” Graphic courtesy of Robert P. Jones

As the data make clear, this avalanche of legislative and policy activity is not a case of legislators responding to widespread concerns or outrage among the bulk of their constituents. We’ve seen this before. When we put it into this historical context, the efforts become more transparent.

And for those of us who grew up in the white Christian world in the South, Randall Balmer’s work and his new book, “Bad Faith: Race and the Rise of the Religious Right,” reminds us the animating spark of the religious right — with its accompanying great white Christian flight from the Democratic Party to the Republican Party in the 1970s and 1980s — was not prayer in schools or so-called family values, but the defense of racist policies at private Christian schools.

The anti-CRT crusades we are seeing today are the worst form of policy, designed not to redress an actual social problem — neither Youngkin nor Ivey, for example, has yet to provide any evidence CRT exists, much less is problematic, in Virginia or Alabama schools — but to sow resentment that is useful to political campaigns and culture wars.

It’s clear the anti-CRT rhetoric resonates among a small portion of the Republican base, particularly those dialed in to Fox News. But it’s hopeful that broad swaths of the country, including solid majorities of Republicans overall, today believe teaching our children about this history of racism in America is something that will help move the country toward a healthier future.

It’s time to shut down the manufactured outrage around critical race theory and call it what it is: the latest racist dog whistle in the old “Southern strategy” toolbox of the GOP and the white Christian right.