(RNS) — As world leaders huddle in Glasgow for the COP26 UN Climate Change Conference, some friends and I are preparing to huddle in the gathering night to light candles and to pray for climate action. Our small act of prayerful resistance against the deepening darkness of climate chaos will be one pinprick of light that will span the globe on Nov. 6 as part of the global kickoff for the #ClimateVigil campaign, an effort to call global Christians to pray and act on climate change.

As a Christian pastor and full-time climate educator and organizer, I believe deeply in the power of bodies gathered together, praying together, singing together, holding hope together. But even I have to admit that lighting a candle and saying a prayer can feel like a small thing. Yet, as frail creatures in the face of the climate crisis, it can sometimes feel as though we can do little more. As wildfires, hurricanes, heatwaves, droughts and floods rage all around us, it is easy to sink beneath our despair.

The main culprit of this climate chaos is, of course, greenhouse gas emissions released through the harvesting and burning of fossil fuels. When this carbon dioxide, methane and nitrous oxide are released from oil, gas and coal infrastructure, they enter our air alongside countless other harmful chemicals and byproducts. This potent cocktail of benzene, volatile organic compounds and soot wreak their own hellish havoc.

Consistently, the populations most at risk from exposure to fossil fuel-related air pollution are the most vulnerable: young kids, pregnant women, the unborn, the elderly, the disabled and Black and Brown communities. Each year, fossil fuel pollution is blamed for more than 200,000 premature deaths in the United States. It is linked to pregnancy complications, like low birth weight and premature births, and to higher rates of asthma and other respiratory ailments in young kids. A terrifying preliminary study released in 2020 shows that up to 90% of the world’s children may be vulnerable to particle pollution that is linked to increased rates of Alzheimer’s and Parkinson’s disease.

Indeed, hopelessness in the face of these catastrophes is natural. Yet, the Christian faith is one of resurrection, not resignation. It calls us to comfort the sick, release the captive and preach the good news of God’s nearness to all creation. That requires us to resist the death-dealing powers polluting our communities, sickening and killing our neighbors, tarnishing the beautiful places we call home and risking the health of the people we love.

After all, Jesus said he came to give abundant life. Our fossil fuel economy does the opposite.

There is, of course, no cure-all to the myriad threats posed by pollution and a changing climate. Yet there are solutions to many of the worst of them at the ready. Blessedly, the recently finalized Build Back Better framework includes many of them: investments in electric vehicle infrastructure and charging station networks, historic incentives for clean energy development and procurement, a methane fee to make sure polluters who foul our air with wasteful natural gas infrastructure will pay for it, funding for a Civilian Climate Corps to put an entire generation of Americans to work creating our clean energy future. On electric vehicles alone, an American Lung Association report finds that a nationwide transition to electric vehicles by 2050 would reduce soot pollution by 62% and greenhouse gas emissions by 90%, saving 6,300 lives in the process.

All of us must advocate with our elected officials to ensure this historic package becomes law. And as we do, let us not forget to also attend to the small, simple acts that sustain our hope and our action. We must light candles. We must pray. We must, all of us together, continue to lift up the victims of the climate crisis, to confess and lament our complicity in their suffering and to resolve to turn our grief into action.

That it might just make all the difference in the world.

(Rev. Kyle Meyaard-Schaap is vice president of the Evangelical Environmental Network and is a Public Voices Fellow on the Climate Crisis with the Yale Program on Climate Change Communication and the OpEd Project. The views expressed here do not necessarily reflect those of Religion News Service.) 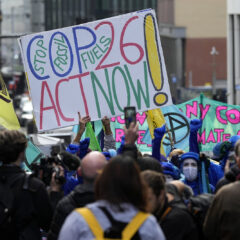 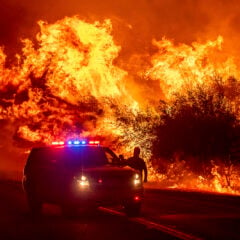