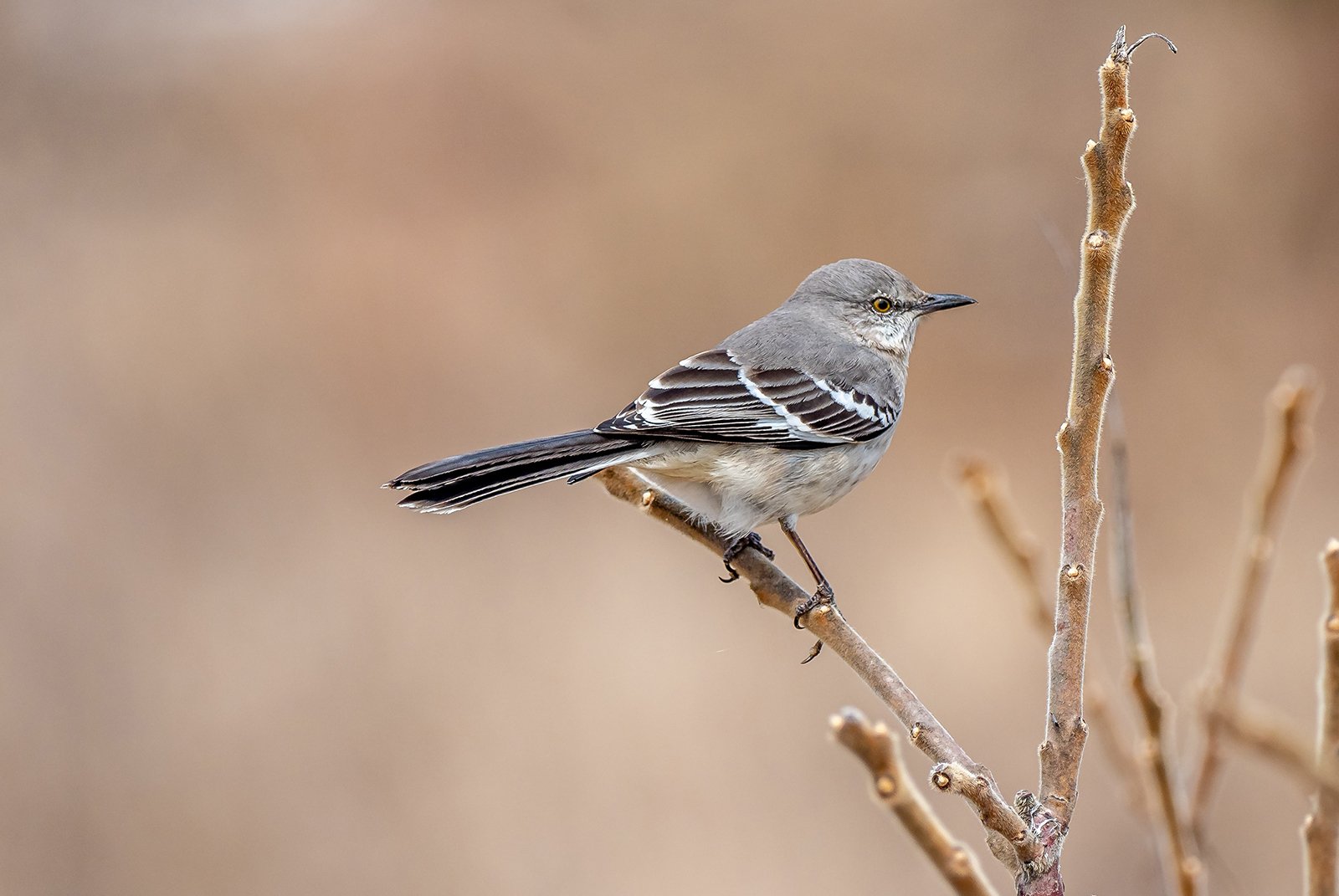 A northern mockingbird perches on a branch. Photo by Patrice Bouchard/Unsplash/Creative Commons

(RNS) — It is early morning in the Great Smoky Mountains. Kevin Burrell is half asleep and wrapped tightly in his sleeping bag. Before surrendering his warm cocoon to the chilly morning air, he hears the call of a hermit thrush just above his tent, coaxing him to stay in bed for just a few seconds longer. The flutelike tune stops but is promptly followed by the quick chirps of a northern cardinal and the cheerful song of a tufted titmouse.

Burrell, with the skill of an avid birdwatcher, realized these sounds were coming from the same spot above his tent and that, while the calls sounded like they came from many birds, they were really just from one: a northern mockingbird. While some campers might have pulled their sleeping bags higher over their heads, trying to drown out the bird noises so early in the morning, Burrell listened closely and sought a deeper, Christian meaning in the small bird’s mimicry.

For him, the mockingbird is the picture of Christian discipleship, which entails learning about and imitating Jesus. The bird is also a lifelong learner, which is what Burrell said he is called to be as a follower of Christ.

Not every Christian may find deeper meaning in God’s avian creations. A select number of birds appear in the Bible — including hawks, sparrows and swallows — but for many, the relationship between birds and Christianity does not stray farther than seeing a dove carrying an olive branch on a banner at church. However, for Christian birdwatchers, this link is alive. When they hear a songbird, it reminds them of singing during church service, and watching chickadees splash around in a birdbath is its own kind of prayer. 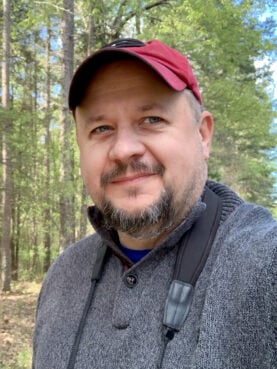 On his blog, ornitheology.com, Burrell, a pastor at StoneBridge Church Community in Charlotte, North Carolina, recounts past birdwatching trips through biological detail and biblical devotion. The made-up word, ornitheology, is not Burrell’s, however. It was coined by theologian and birder John Stott in his book “The Birds, Our Teachers,” and refers to the unique blend of scientific study and religious appreciation of birds.

“I think that everybody who takes seriously the fact that God is a creative God should pay attention to some creative aspects of what he’s made,” said Burrell. “And I choose birds.”

Over the years, birdwatching has taken him on trips around the world and in his own backyard. Now 52 years old, Burrell has become most attentive to the birds that are local to his area. He said that as a pastor, he is always looking for metaphors, which he finds plenty of in the bird world.

His post on the northern mockingbird explains the link between the mockingbird and discipleship. He also likens the unrelenting song of the small Carolina wren of his home state to singing in the Christian faith. The bird’s persistence reminds him of what he is called to as a believer — singing, praying and worshipping. His most recent post, about an encounter with homing pigeons, details the importance of home and the place on earth where God has put you.

“There’s so much illustrative material in the bird world that teaches us about worship, creativity, development and care,” said Burrell. 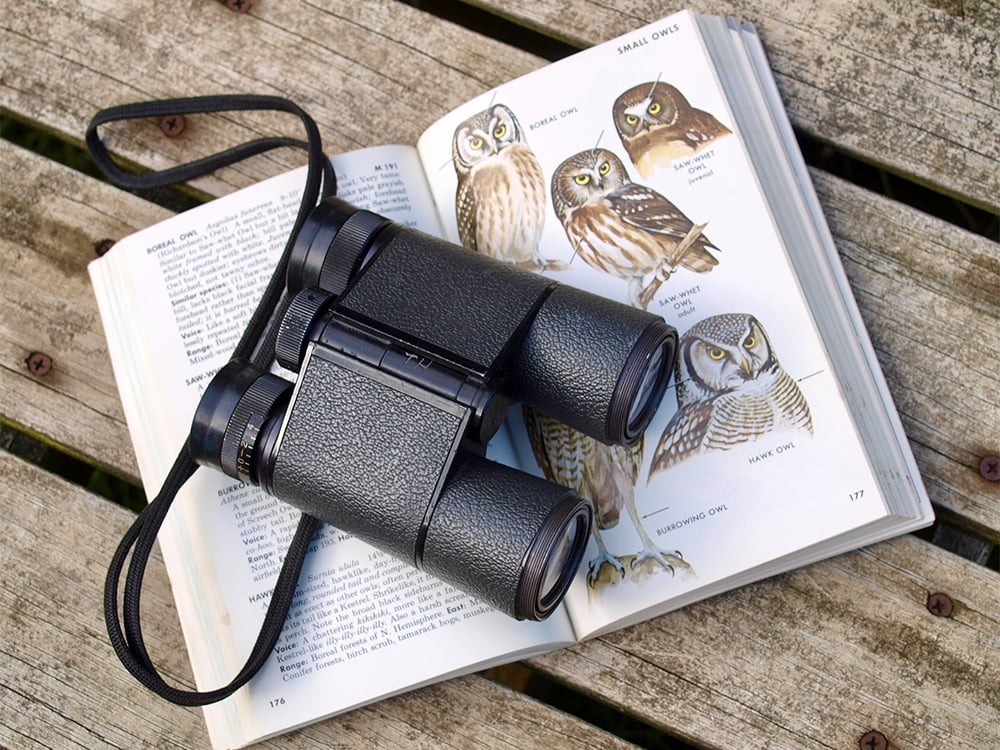 These lessons can also be found in the Bible. Debbie Blue, a founding pastor at House of Mercy in St. Paul, Minnesota, writes about the significance of different birds of the Bible in her book “Consider the Birds: A Provocative Guide to Birds of the Bible.”

“God hovers over the face of the water in Genesis — the ancient rabbis suggest — like a bird,” writes Blue. “Birds gorge on the flesh of the defeated ‘beast’ in Revelation. They are a currency of mercy — the birds of sacrifice. They bring bread to the prophets. They are food for the wanderers.”

Blue, whose fascination with birds stemmed from her own birdwatching experiences, examines the significance and role of birds in Judeo-Christian narratives while musing on the metaphors and analogies birds provide for Christian faith.

In the chapter on doves, Blue explained the symbol of a dove at Jesus’ baptism. She realized the specific type of dove present would have likely been a rock dove, found in Palestine, and more commonly known as a pigeon.

The pigeon, often considered a pest and hard to get rid of, reminds Blue of the spirit of God. “It seems like a pigeon could be with us in both our worst and most beautiful places — a dirty alley or a Roman piazza,” said Blue. 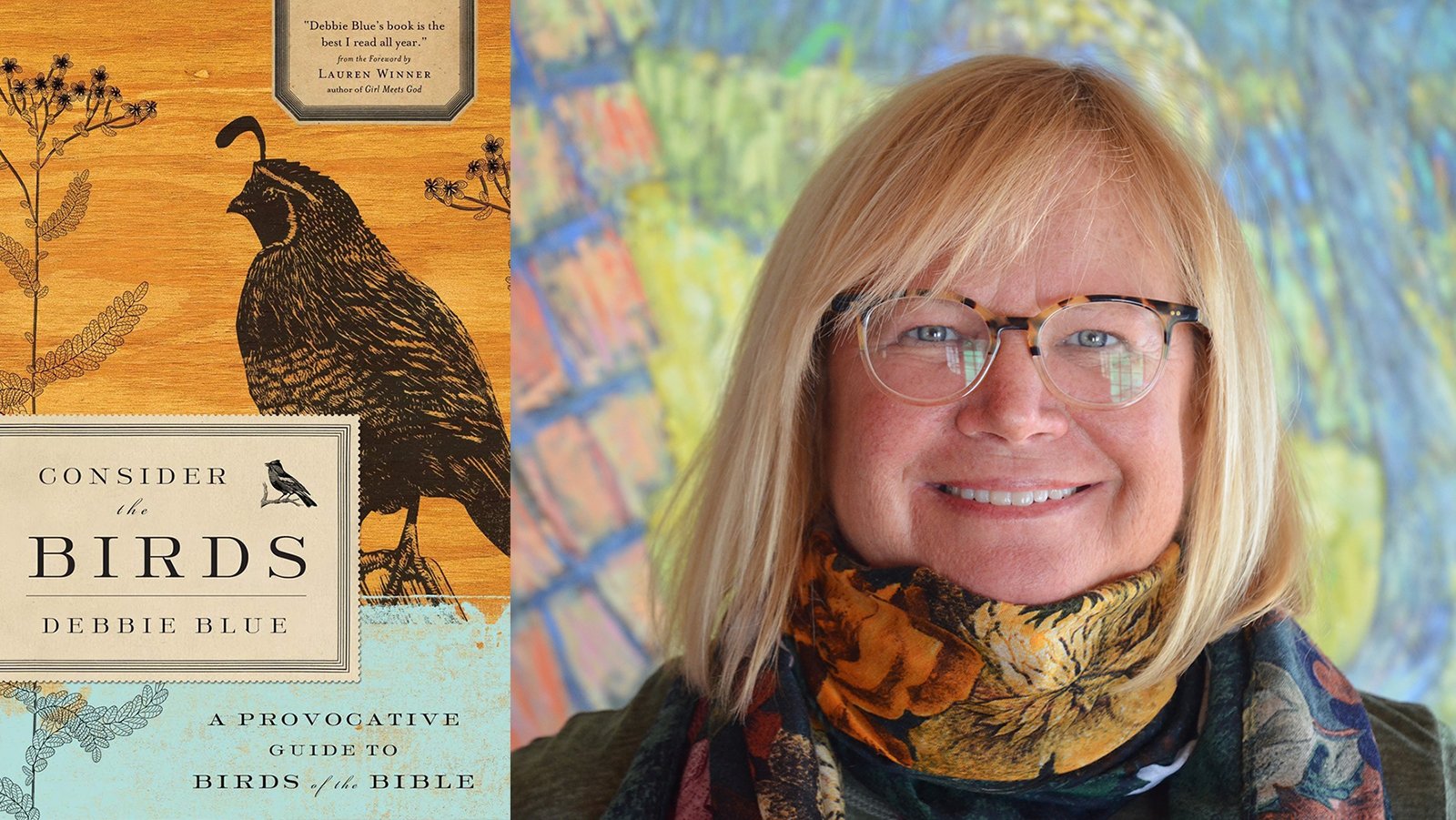 “Consider the Birds: A Provocative Guide to Birds of the Bible” and author Debbie Blue. Courtesy images

God can also be found in vultures. Before writing her book, Blue said, she saw this bird as violent, dark and dreadful. But, after learning about vultures’ ability to cleanse and rid the earth of disease — they have uniquely strong digestive juices that kill bacteria and pathogens — she sees them as purifying.

A vulture is a symbol for “a God that can take everything in and make it clean — a God that can make even death nontoxic,” said Blue.

RELATED: Are religious communities reviving the revival? Outdoor worship is a US tradition

Kevin Kummer, a campus pastor with InterVarsity Christian Fellowship, is drawn to the distinct personalities and intelligence of birds. He sees this specifically in the black-capped chickadees that frequent his backyard. They land on the edge of a dish of water that he has above his hummingbird feeder. Every time the little birds find the dish, meant to keep ants out of the sweet sugar mixture in the feeder, he hears them sing a brief song before drinking — as if they are thankful. 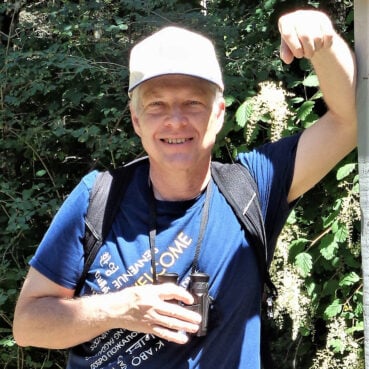 “I try not to read human personality into them,” said Kummer. “But it seems to me that there’s certainly a character to birds that’s really different.”

Kummer, who lives in Iowa City, likes to carve out time in his day to watch the birds in his area — whether in his backyard or on a walking trail through the woods. It is a pastime, he said, that deepens his relationship with God.

“It is a spiritual discipline, a facet of a life of prayer, an extension of my seeking, seeing, and hearing from the Spirit of Jesus,” writes Kummer in a blog post titled “Birdwatching & Prayer.”

“The act of recording, describing, reflecting and savoring what I see deepens the impression made on me by a bird or the Spirit,” writes Kummer.

When birding, Kummer said, he feels an external nearness to God and his creation as well as an internal appreciation for God’s artistry.

“I have a sense that God must really love us a lot to create such an amazing, fascinating, beautiful world,” he said.

For Burrell, being a Christian birder means being able to thank someone for the beauty he encounters, whether that beauty is a ruby-throated hummingbird he saw at home in North Carolina or a rainbow lorikeet spotted on a bird walk through Warrumbungle National Park in Australia. Nature is a window that brings him closer to God.

“To me, the beauty is a window that points to a creator of it all. It’s a means to a greater end,” said Burrell. 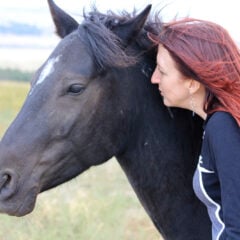