The demonstrations began earlier that morning at Washington’s Lutheran Church of the Reformation, where the National Council of Jewish Women, Catholics for Choice and other religious groups hosted an interfaith service featuring speeches from faith leaders and lawmakers in support of abortion rights.

Many speakers condemned the Mississippi law before the court, which bans abortions after 15 weeks of pregnancy — far earlier than stipulated in the landmark 1973 case Roe v. Wade, which legalized abortion nationwide and barred states from prohibiting the procedure before fetal viability, which is around 23 weeks.

RELATED: Before there was Roe: Religious debate before high court’s historic ruling on abortion 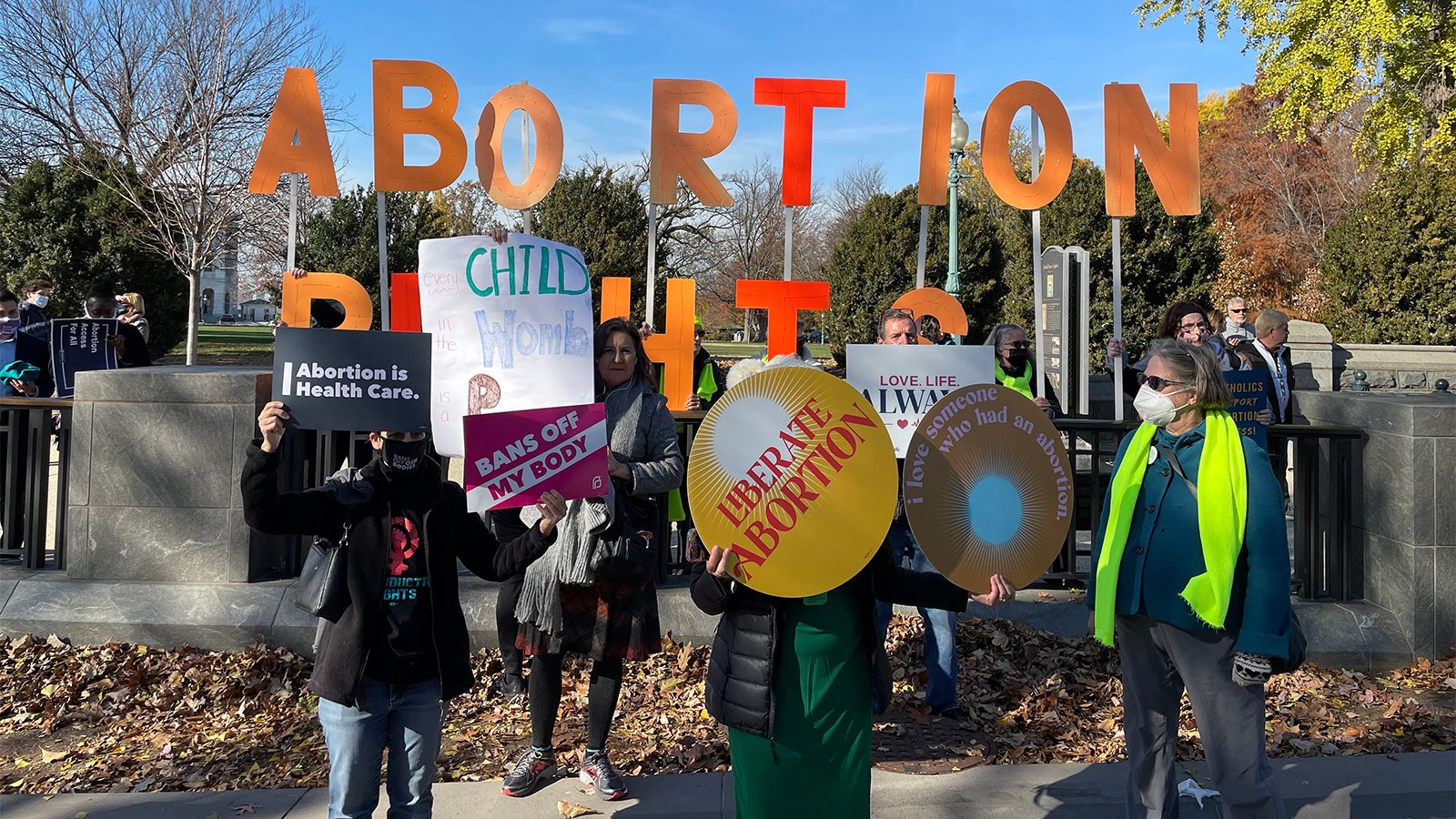 U.S. Rep. Jan Schakowsky, an Illinois Democrat and member of NCJW, noted oral arguments were being conducted during a Jewish holiday.

“This is the time of Hanukkah,” she said, recounting the traditional story of the Jewish celebration as her voice began to rise. “The Maccabees, when they went into the temple, did not expect that the candles would light for more than one day. And there was a miracle. But the Maccabees were also warriors, and we have to be warriors for freedom going forward.”

NCJW and Catholics for Choice were among several faith groups that filed an amicus brief in the Mississippi case earlier this year. In addition to expressing general support for abortion rights, authors argued that abortion bans infringe on the religious freedoms of some faiths, including Jewish Americans who view “the creation of a human life” as “something that happens gradually over time.”

The argument appeared to resonate with Justice Sonia Sotomayor, who made a point during oral arguments to mention the spectrum of religious thought regarding abortion. After a lawyer arguing in support of the ban decried rulings such as Roe v. Wade as “the right to end a human life,” Sotomayor, a Roman Catholic and one of the court’s stalwart liberals, challenged the attorney’s framing.

“How is your interest anything but a religious view? The issue of when life begins has been hotly debated by philosophers since the beginning of time — it’s still debated in religions,” she said. “So, when you say this is the only right that takes away from the state the ability to protect a life, that’s a religious view, isn’t it?” While the justices questioned attorneys in the case, NCJW and Catholics for Choice marched from the church to join thousands of other demonstrators outside the Supreme Court. Crowds huddled for dueling rallies separated by metal barricades, with opponents and supporters of abortion rights leaning on faith to justify their positions.

They represent a spectrum of support for abortion that varies per faith tradition. A 2014 Pew Research study found Jewish Americans to be among the most supportive, with 83% saying they believe abortion should be legal in all or most cases. Another Pew survey, conducted this year, also reported smaller majorities of Black Protestants (64%), white nonevangelical Protestants (63%) and Catholics (55%) saying the same.

The reverse was true among white evangelicals, however, with 77% saying abortion should be illegal in all or most cases. And while Catholic lay people may slightly favor abortion rights, the church itself is still adamantly against it — including many U.S. bishops, who have recently been embroiled in a debate over whether Catholic politicians who support abortion rights should be denied the Eucharist.

For their part, religious opponents of abortion were well represented among the crowd. Students from Liberty University, an evangelical Christian college, gathered in prayer circles to sing hymns. A group with signs reading “Prepare to meet thy God,” “Repent or Perish” and “Abortion is murder” preached fire and brimstone into a megaphone. A man with a cross on his baseball cap held a sign calling for an end to Roe while waving an “Appeal to Heaven” flag — an ensign known for its prominence during the Jan. 6 insurrection. 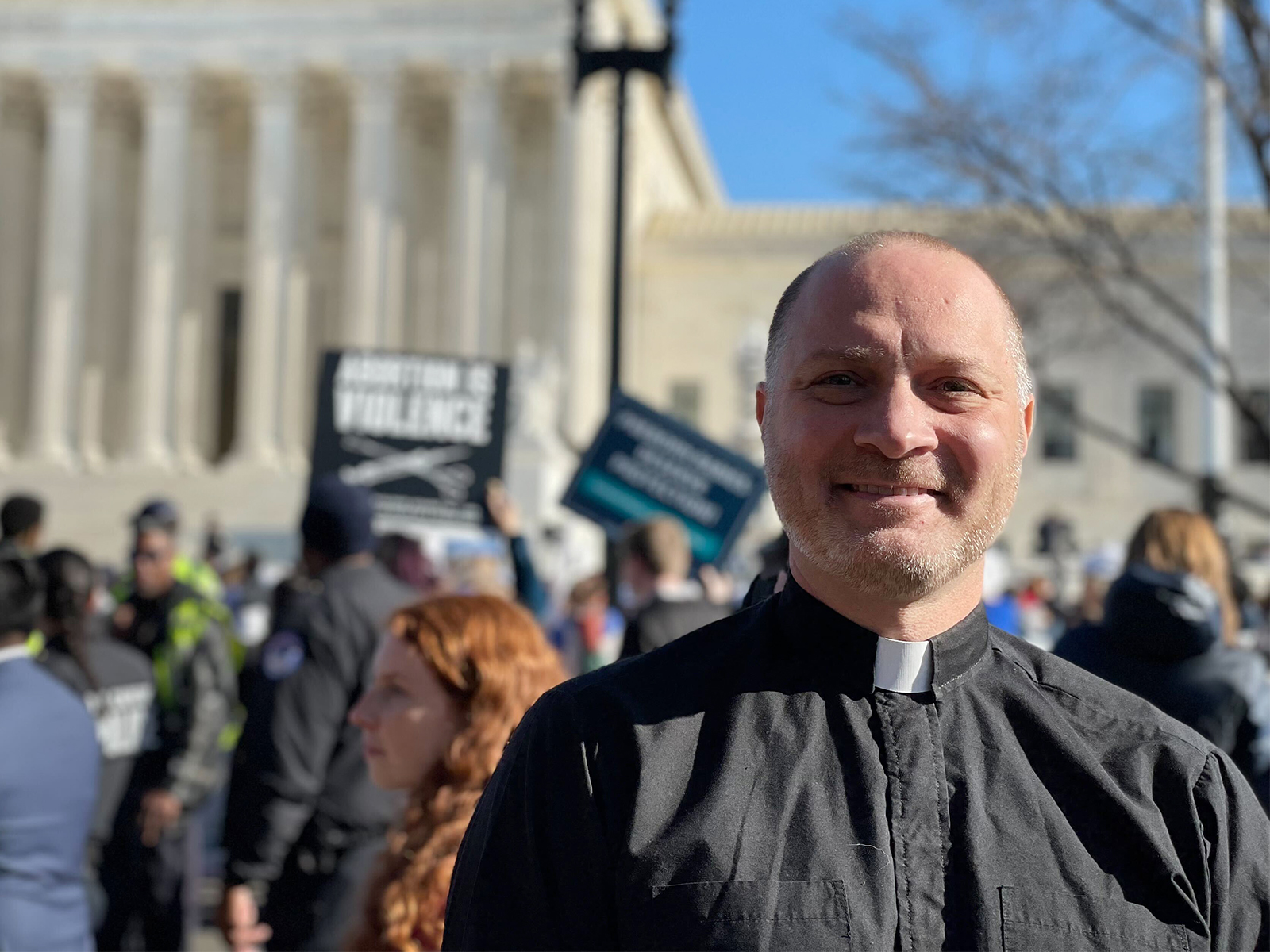 Others stood by quietly, such as the Rev. Michael Salemink, a minister of the Lutheran Church-Missouri Synod and head of Lutherans for Life.

But on the other end of the street, the Rev. Amanda Hambrick Ashcraft of Middle Collegiate Church in New York City argued a very different position.

“I believe that it is immoral to restrict abortion access,” she said, arguing that laws designed to do so are built on a “misogynistic, capitalist, white supremacist foundation.” “While it is difficult to predict the ultimate outcome in any case by simply listening to oral arguments, the Court has before it a once-in-a-generation opportunity to dismantle the abortion framework that has built up following the decisions in both Roe and Casey,” Leatherwood said in a statement. “The Court should not hesitate to do so.”

But Sheila Katz, head of the NCJW, told Religion News Service she intends to keep advocating for abortion rights no matter how the court rules. She and others protested in Washington on Wednesday “because of our faith, not in spite of it,” she said, and she expressed hope Congress would pass federal legislation protecting the right to an abortion should the court invalidate Roe.

“Our tradition permits the termination of pregnancy — the end,” she said.