(RNS) — Testifying in California in 1964 before the state Assembly, the Rev. William J. Kenneally, president of St. John’s Seminary in Camarillo, declared: “Women who do not want to become mothers should not engage in acts leading to maternity.”

The Roman Catholic priest, who opposed the potential liberalizing of his state’s abortion law, added that abortion is a “betrayal of maternity and converts the womb into a human butcher shop.”

At the time of Kenneally’s remarks, California, along with most other states, considered abortion legal only when necessary to preserve the life of a pregnant woman. Nine years later, the Supreme Court’s Roe v. Wade would change all that, extending a right to privacy that allowed women nationwide to choose to terminate their pregnancies within limits.

On Wednesday (Dec. 1), the U.S. Supreme Court justices heard arguments in a closely watched case that some predict could again change the course of abortion law: Dobbs v. Jackson Women’s Health Organization, a Mississippi case that focuses on whether states are permitted to ban abortions before a fetus can survive outside the womb. If they choose, the justices could overturn Roe.

It’s a goal long sought after by religious conservatives, including some evangelicals who have come to be known for often holding a strict anti-abortion stance. 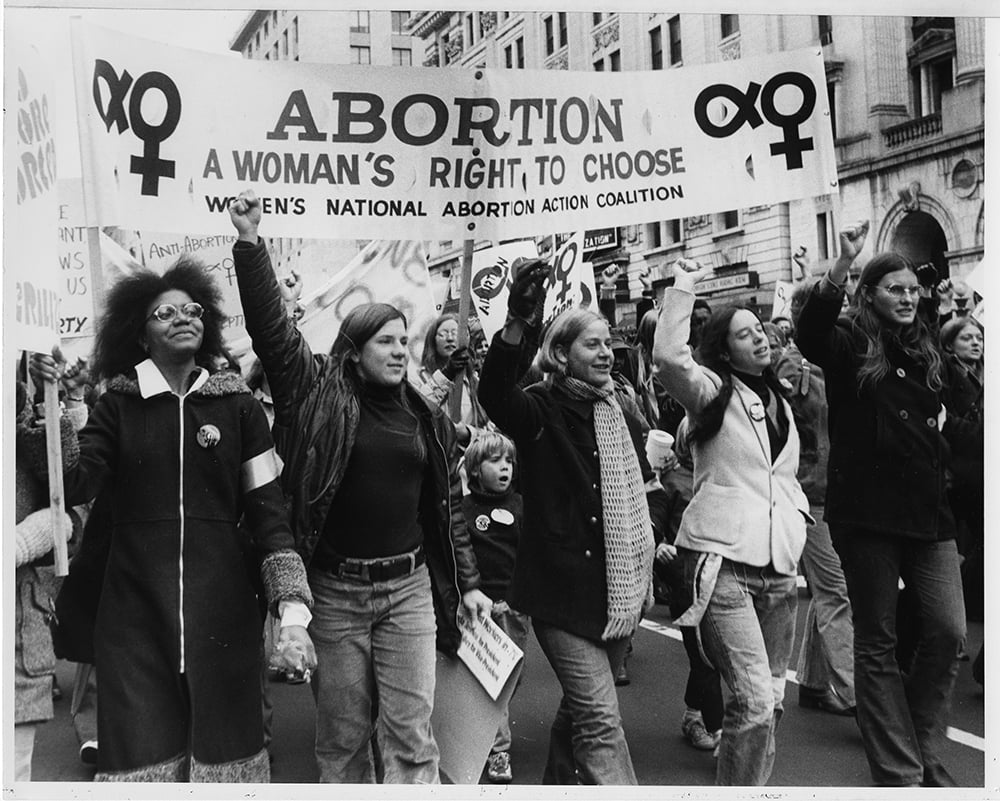 Women carry a banner as they march down Pennsylvania Avenue in a pro-abortion rally in Washington, D.C., in November 1971. About 2,500 attended the demonstration urging the repeal of laws pro­hibiting abortions. The rally organizers had hoped for 10,000 attendees. RNS archive photo. Photo courtesy of the Presbyterian Historical Society.

A sampling of evidence based on 1960s and 1970s reports from Religious News Service (now known as Religion News Service) shows that the lead-up to the Roe decision hardly happened in a vacuum. Even as Roe made its way through the judicial system, faith leaders on both sides of the issue bluntly advocated for and opposed the procedure, arguing over definitions of what might be legalized. Politicians of faith meanwhile debated the controversial procedure just as fiercely.

While Kenneally and other Catholic clergy were some of the loudest voices in the debate, representatives from more progressive corners of the religious landscape were already offering proposals for less stringent laws, that would permit abortion in cases involving rape, incest or mental competency or where the mother’s health was endangered.

As early as 1963, the Unitarian Universalist Association overwhelmingly approved a resolution advocating that abortion be legal if “there exists some compelling reason, physical, psychological, mental, spiritual or economic.”

Four years later, the Union of American Hebrew Congregations — now known as the Union for Reform Judaism — passed a similar resolution, listing rape and incest and “threatened disease or deformity of the embryo or fetus, the physical and mental health of the mother, and to take into account the social, economic and psychological factors that might warrant therapeutic termination of pregnancy.” 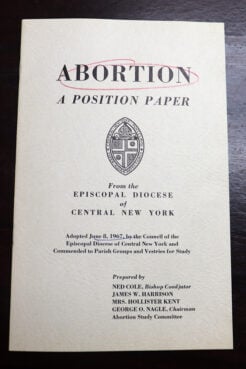 The same year, 1967, the Rev. Norman Vincent Peale, president of the Protestant Council of the City of New York and already one of the best-known clergymen in the country, read a joint statement with leaders of three Jewish groups at a news conference proclaiming their support for a change in New York’s “unduly restrictive, tragically uncharitable and unjust” abortion law.

“We are concerned solely and simply with individual cases in which continuation of the pregnancy could have tragic and damaging effects,” read the statement, which was joined by the New York Federation of Reform Synagogues, the Association of Reform Rabbis and the New York Metropolitan Region of the United Synagogue of America, the last of which represented Conservative Jews.

Faith leaders were not only concerned with how restrictive existing laws were; they advocated giving broader access to abortion to make it safer. “We also view with grave concern and much alarm the increase of illegal abortions frequently carried out in unhygienic, unsanitary and non-medical settings which pose great threats to the health of the woman,” wrote four rabbis in Minnesota’s Twin Cities in a 1967 statement.

Two weeks later, RNS’ “The Week in Religion” reported that there had been 200,000 illegal abortions in the previous year and said, “Illegal abortions result in approximately 500 deaths each year, making them the largest cause of maternal death in childbirth.”

Many conservative voices were comfortable with recognizing more situations in which abortion would be acceptable. The National Association of Evangelicals passed a resolution in 1971 recognizing “the necessity for therapeutic abortions to safeguard the health or the life of the mother, as in the case of tubular pregnancies.”

It also allowed that other pregnancies, such as those “resulting from rape or incest, may require deliberate termination, but the decision should be made only after there has been medical, psychological and religious counseling of the most sensitive kind.”

But the NAE’s statement showed how some Christians feared that legalized abortion for these cases could be a slippery slope. The resolution cautioned “that abortion on demand for reasons of personal convenience, social adjustment or economic advantage is morally wrong, and (the NAE) expresses its firm opposition to any legislation designed to make abortion possible for these reasons.” 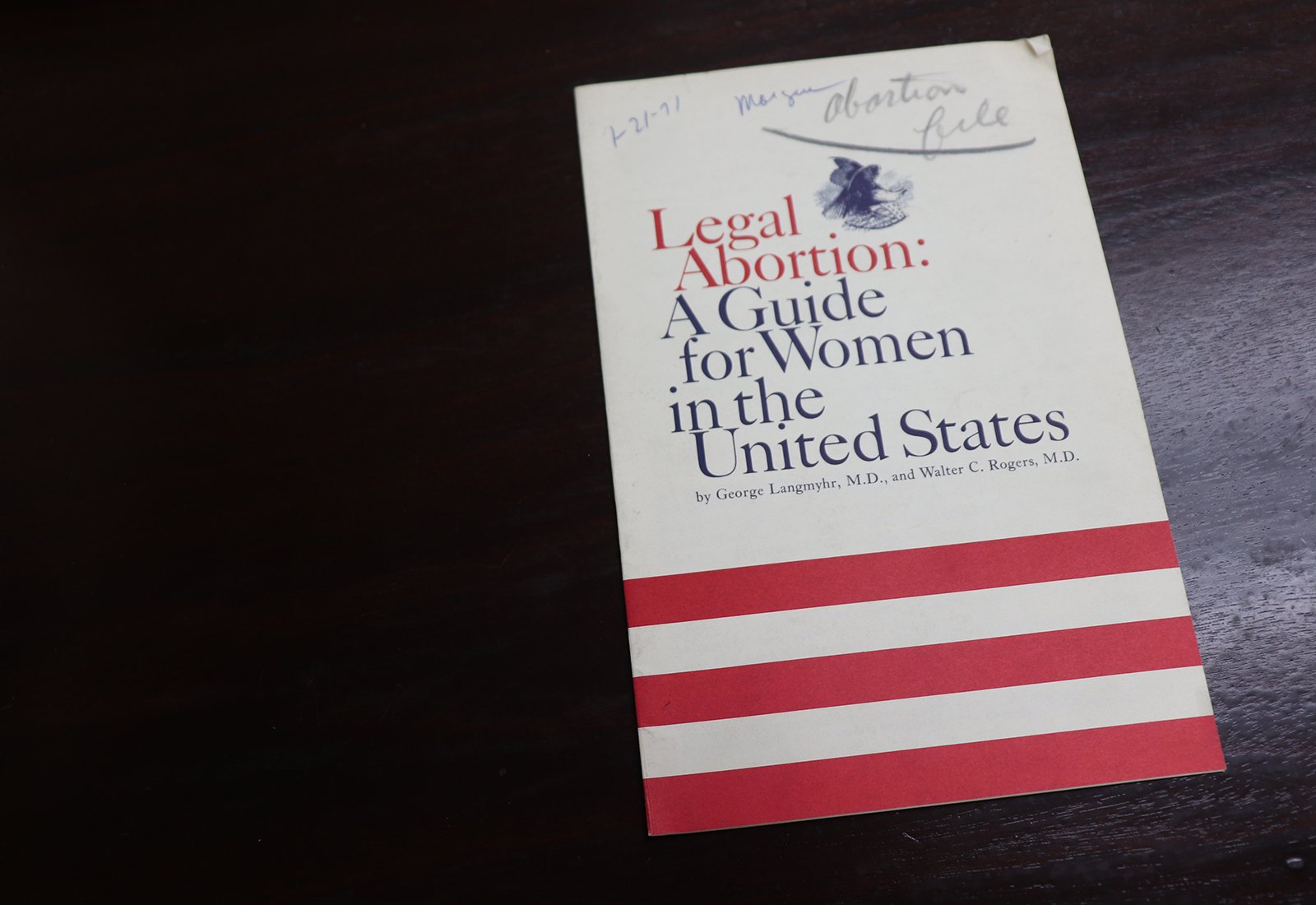 Even then, some Catholic politicians were distancing their political decisions from their faith. When a 1967 abortion bill died in the Oklahoma Senate, RNS reported: “The bill’s author, Rep. Curtis Lawson of Tulsa, gave up after the state’s first Roman Catholic governor, Dewey Bartlett, opposed some provisions in the legislative proposal. The governor said his Catholic faith had nothing to do with his opposition.”

“I’m for change,” he said in answer to a question by a Catholic priest at an appearance at Skidmore College. “For example, if a lady is attacked and doesn’t want to have a child, she should not have to have a child.”

In another 1967 appearance, Kennedy said his decisions on abortion were based on what he believed as a senator, rather than as a Catholic. 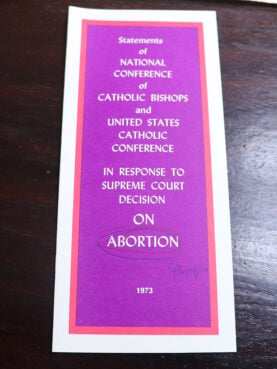 But as Roman Catholic Church leaders remained the most vociferous opponents of liberalizing abortion laws, they were joined by notable Republican voices. When New York passed its less restrictive law in 1970, permitting abortion up to the 24th week of pregnancy, New York Cardinal Terence Cooke sought to repeal it.

President Richard Nixon weighed in with his support for Cooke’s efforts. “Your decision, and that of tens of thousands of Catholics, Protestants, Jews and men and women of no particular faith, to act in the public forum as defenders of the right to life of the unborn, is truly a noble endeavor,” Nixon, who had Quaker roots, wrote to Cooke in 1972. “In this calling, you and they have my admiration, sympathy and support.”

Demonstrations from each side of the debate were increasingly noted in RNS coverage, including marches through the cities of Washington and New York. In 1967, demonstrators picketed outside New York’s St. Patrick’s Cathedral as they blamed Cardinal Francis Spellman for preventing the passage of a liberal abortion law. In 1970, five Catholic protesters were found guilty of illegally entering George Washington University’s property to protest abortion services available there.

RNS also reported on international abortion debates, including one 1969 story from Canada, where a Catholic member of the House of Commons spoke of losing his pregnant wife when an abortion could have saved her.

“Eh, bien, I ask those who have troubled consciences whether it would not have been better to save the mother at that moment rather than condemn both of them to death?” asked Joseph Alfred Mongrain.

When the day came, on Jan. 22, 1973, that the state fights were superseded by a national decision in the United States’ highest court, the debate did not abate. 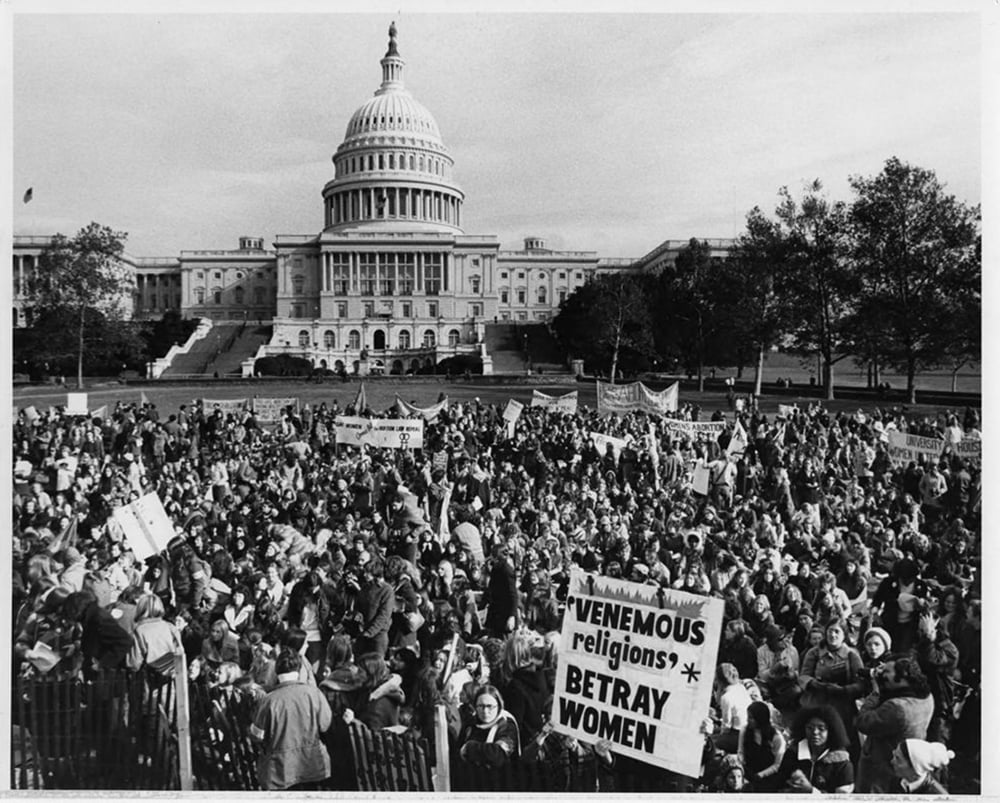 Pro-abortion demonstrators mass at the west front of the Capitol Building in November 1971, in Washington. RNS archive photo. Photo courtesy of the Presbyterian Historical Society.

Monsignor James T. McHugh, director of the U.S. Catholic Conference’s Family Life Division, called it “a terrifying use of judicial power” as well as “a violation of the moral and ethical convictions of millions of Americans.”

One March 1973 RNS story made a prescient observation about Roe v. Wade that remains true almost 50 years later: “Judges, attorneys general and legislators — beset by pro-abortion or anti-abortion advocates — are looking for Solomon’s wisdom to find some middle ground on this thorny problem. And like as not, the U.S. Supreme Court has not seen the last of it, either.”