VATICAN CITY (RNS) — Immigrants and refugees are expected to be the focus of Pope Francis’ imminent apostolic visit to Cyprus and Greece, and some asylum-seekers harbor the hope to be selected by the pope to return with him to the Vatican.

The trip, Francis’ 35th since becoming pope, will take him to two countries that bear the brunt of Europe’s frontiers, where large influxes of migrants and asylum-seekers have put huge strains on local populations. He departs the Vatican on Thursday (Dec. 2) and will return Monday.

Catholics represent a minority in the mainly Orthodox Christian countries of Cyprus and Greece, making ecumenism another important theme of the papal visit. But Catholic aid organizations are hoping the pontiff will fill some of the leadership gap on refugees left by  German Chancellor Angela Merkel, a champion of resettlement who is retiring from politics.

Catholic charity workers on the ground say Francis would send a powerful message were he to take a handful of migrants away from the refugee camps that have swelled in Cyprus or Greece repeatedly in recent years and fueled growing populist political movements.

“We’ve had people approach us expressing interest,” said Elizabeth Kassinis, executive manager at Caritas Cyprus, part of a global network of Catholic anti-poverty programs. While there has been no confirmation from Vatican officials that the pope plans to take migrants with him, “there is definitely some buzz,” Kassinis said, about the possibility.

When Francis visited the Moria refugee camp in Lesbos, Greece, in 2016, he took 12 Syrian refugees to live in Italy. This time, the pope might instead take some refugees from Cyprus, which is facing what local authorities are calling a crisis bordering on an emergency as the number of immigrants per capita reaches five times the European average.

“A gesture such as this has a tremendous symbolic value and meaning,” Kassinis said. “The pope is saying that it’s all of our responsibility to look for a solution for all who are displaced by conflict, by climate change, by persecution.”

Two asylum-seekers, Ejube and Grace, have been living out of a small tent in the United Nations buffer zone in Cyprus for eight months after fleeing violence and conflict in their native Cameroon. Authorities in Cyprus have avoided addressing their situation for fear of encouraging more migrants from the Middle East and Africa to take that route.

Francis will fly to Cyprus on Thursday and stay for two full days. The first day will be devoted to meeting President Nicos Anastasiades after spending the morning with the Meronite Christian representatives at Our Lady of Grace Cathedral in the capital of Nicosia.

On Friday, the pope will meet with Orthodox Archbishop Chrysostomos II and with the local Catholic community. Francis’ afternoon will focus on the plight of immigrants and refugees, starting with a Mass at the 22,000-seat GSP Stadium and followed by an ecumenical prayer with migrants and refugees at the Church of the Holy Cross in Nicosia.

Cyprus has welcomed over 20,000 migrants and refugees, mostly from Syria, Congo, Nigeria, Somalia and Cameroon. The increase in African immigrants over the past year has stirred racism and populist sentiment in the island state, according to Gosia Chrysanthou, a case manager at Caritas Cyprus who also serves on the organization’s board.

Cyprus “is a small island that feels very insecure about its identity, so any influx of other peoples and nationalities naturally creates fear,” said Chrysanthou.

Support for populist parties has grown in Cyprus since the year began, according to poll data by the German organization Europe Elects. The small state heavily relies on migrant workers for its economic survival, but the sheer numbers of migrants coming to Cyprus have made it a “very fertile ground for populist sentiment,” Chrysanthou said.

Amid growing resentment toward migrants and a struggling economy, the immigration system in Cyprus has been struggling to adapt. Caritas attempts to help migrants get a footing in the maze of bureaucratic and logistical hurdles through programs fostering health and education, but many migrants can still “find themselves in a limbo,” Chrysanthou explained.

“With the pope coming, the people in Cyprus will understand that they are not alone,” she added.

On Saturday, Francis will travel to Athens, Greece, where he will meet with government leaders and representatives of the Greek Orthodox Church. The following day, he will return to the Moria refugee camp on Lesbos that he visited in April 2016 and wrap up the day with a public Mass at Athens’ Megaron Concert Hall. 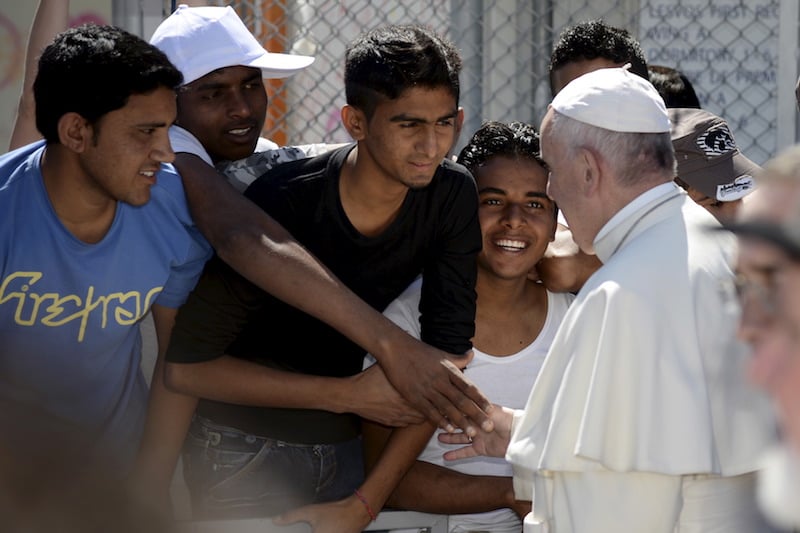 Pope Francis greets migrants and refugees at the Moria refugee camp near the port of Mytilene, on the Greek island of Lesbos, April 16, 2016. (Filippo Monteforte/Pool Photo via AP)

Francis’ last day in Greece (Monday) will focus on the young generations as he will deliver a speech at the school of the Ursuline Catholic sisters.

The population is Lesbos is increasingly tired of accommodating over 15,000 migrants in Moria over the past five years, said Maria Alverti, director of Caritas Hellas in Greece since 2016. Resentment toward immigrants in the country has grown in recent years, she added, especially during the pandemic, with people “getting more and more aggressive.”

Even with the halt in migration flows brought on by the COVID-19 pandemic, there are currently more than 100,000 refugees and migrants in the country, mostly from Afghanistan, Somalia, Syria, Congo and Palestine.

“We all hope Pope Francis can affect, with his words and his actions, the European government and the Greek government in how to better deal with the situation,” Alverti said.

Alverti called taking migrants from Moria back to the Vatican in 2016 “a very big, symbolic gesture,” and she said, “There is a big expectation from the population that this could be repeated again.”

RELATED: America sacramentalizes guns as God’s gift to the good. This is heresy.