VATICAN CITY (RNS) — Pope Francis pushed back against the European Commission’s internal guidelines, which have drawn fire for trying to “cancel Christmas,” likening these efforts to dictatorships as he warned against “ideological colonization.”

Internal communications of the European Commission were leaked last week by the Italian daily Il Giornale. The 30-page document, titled “Union of Equality,” advised members to “avoid assuming that everyone is Christian,” especially during the winter holidays.

It suggested members of the commission avoid using the word “Christmas” in favor of “holidays.” It also advised against using names “that are typically from one religion,” substituting “Maria and John” with “Malika and Julio” when referring to a hypothetical couple.

The document also provided guidelines on how to address gender and sexual orientation, drawing criticism from Vatican representatives, far-right politicians and also the pope. The European Commission retracted the document last Thursday, calling it “a work in progress” and promising in a tweet to publish an “updated version.”

The document is “anachronistic,” Pope Francis said on Monday (Dec. 6) during a press conference aboard the papal flight returning from his four-day apostolic visit to Cyprus and Greece. “Throughout history many, many dictatorships tried to do it,” he added.

Francis said such efforts are the result of a “watered-down” approach to Christianity that has failed throughout history. “The European Union must take on the ideals of the founding fathers, which were ideals of unity, greatness, and be careful of not paving the road for ideological colonization,” he said, which risks dividing countries and could “make the European Union fail.” 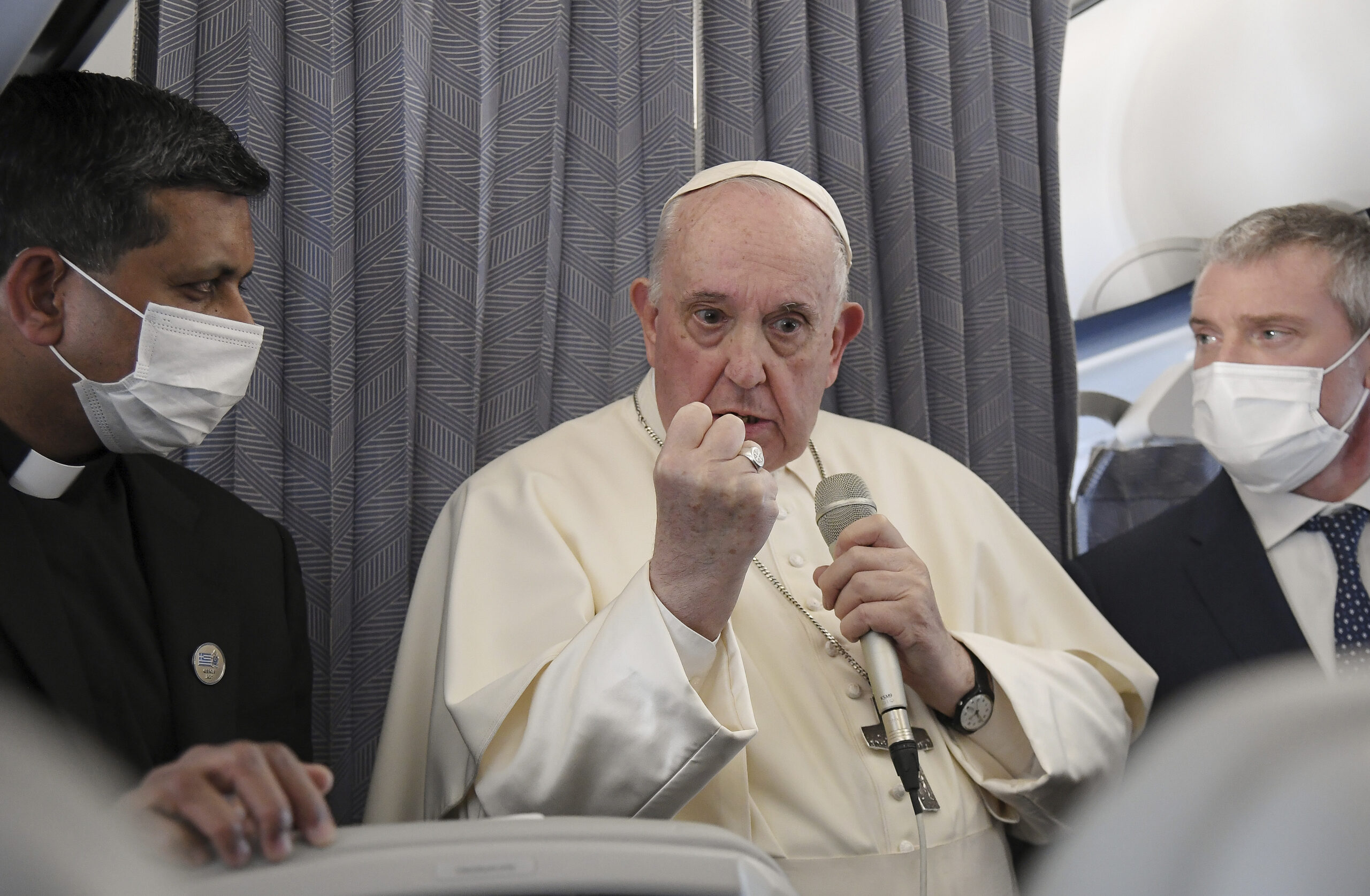 During his historic visit to Greece, his second trip to the birthplace of democracy, Pope Francis focused on the need for Europe to return to its roots while avoiding the temptations of populism and nationalism. His words focused especially on the plight of migrants and refugees, urging European leaders to welcome and integrate religious, ethnic and cultural differences.

The pope issued a word of warning to European legislators to respect the differences of member countries. “Every country has its peculiarity, but every country is open to others,” he said, adding the sovereignty of Europe and the sovereignty of every member state is part of “a unity that respects the singularity of each country.”

Pope Francis’ right-hand man, Cardinal Pietro Parolin, who heads the Vatican’s Secretariat of State, also commented on the controversial European document in an interview with Vatican news outlets Nov. 30. The cardinal remarked on the “tendency to homogenize everything” without taking into account the “rightful differences” of countries and religious beliefs.

Parolin stated the document issued by the European Commission shows “forgetfulness of what is a reality” and “a cancellation of our roots,” especially when it comes to “Christian festivities.”

“Of course, we know that Europe owes its existence and its identity to many influences, but we certainly cannot forget that one of the main influences, if not the main one, was Christianity itself,” he added.

The cardinal also said the papal trip to the Mediterranean countries of Cyprus and Greece, countries disproportionally left to address the influx of migrants and refugees without support from Europe, “comes at the right time.”

“It is a journey that reminds us precisely of these fundamental dimensions that cannot be erased. We must rediscover the capacity to integrate all these realities without ignoring them, without fighting them, without eliminating and marginalizing them,” he said.

RELATED: Pope Francis is asking the US bishops to listen to the people. Will they?