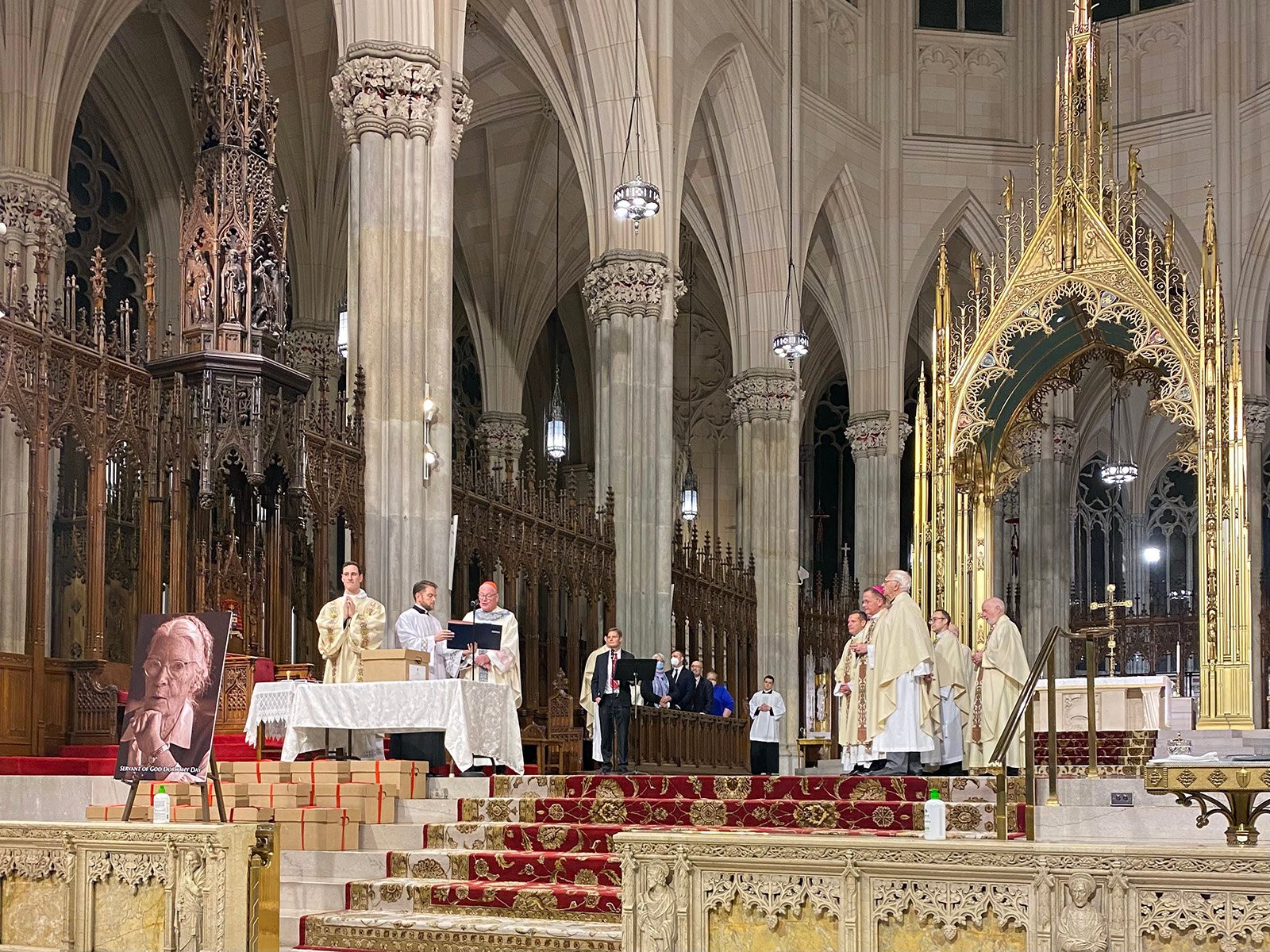 Cardinal Timothy Dolan, center left, presides over the sealing of cardboard boxes filled with evidence of Dorothy Day’s “reputation for holiness” during a Mass at St. Patrick’s Cathedral in New York, Dec. 8, 2021. The boxes will be sent to the Congregation for the Causes of Saints in Rome. RNS photo by Renée Roden

NEW YORK (RNS) — With St. Patrick’s Cathedral’s recently renovated, multimillion-dollar ceiling sparkling overhead, Cardinal Timothy Dolan celebrated Mass on Wednesday (Dec. 8), the Catholic feast day of the Immaculate Conception, with over 2,000 worshippers looking on. On the steps of the cathedral’s chancel, at the foot of the cardinal’s chair, 17 cardboard boxes, neatly tied in red ribbons and sealed with wax, were packed with the makings of a saint.

The boxes were filled with evidence attesting to Catholic radical Dorothy Day’s “reputation for holiness” to the Congregation for the Causes of Saints in Rome. Compiled under the aegis of the Dorothy Day Guild, formed after St. John Paul II opened the cause for Day’s canonization in 2000, the Mass was a formal sendoff for their two decades of work.

“The documents and copies altogether weigh two-thirds of a ton,” said Jeffry Korgen, who has coordinated the Archdiocese of New York’s efforts for Day’s canonization since 2014. “Try getting a good deal on shipping them,” he said.

Day died in the East Village in 1980, and her cause for canonization was officially opened when Cardinal John O’Connor obtained then-Pope John Paul II’s permission 20 years later.

The more than 50,000 pages of newspaper articles and diary entries by Day, artworks made in her honor, a CD of music celebrating her and other documents — even her FBI file — were carefully collected by a diocesan commission, with the help of hundreds of transcribers, some from as far away as India, who turned Day’s sometimes incomprehensibly sloppy handwriting into legible evidence.

“One of the reasons this has taken a while is that she had her own newspaper — never an unpublished thought,” Korgen told Religion News Service in a phone interview. 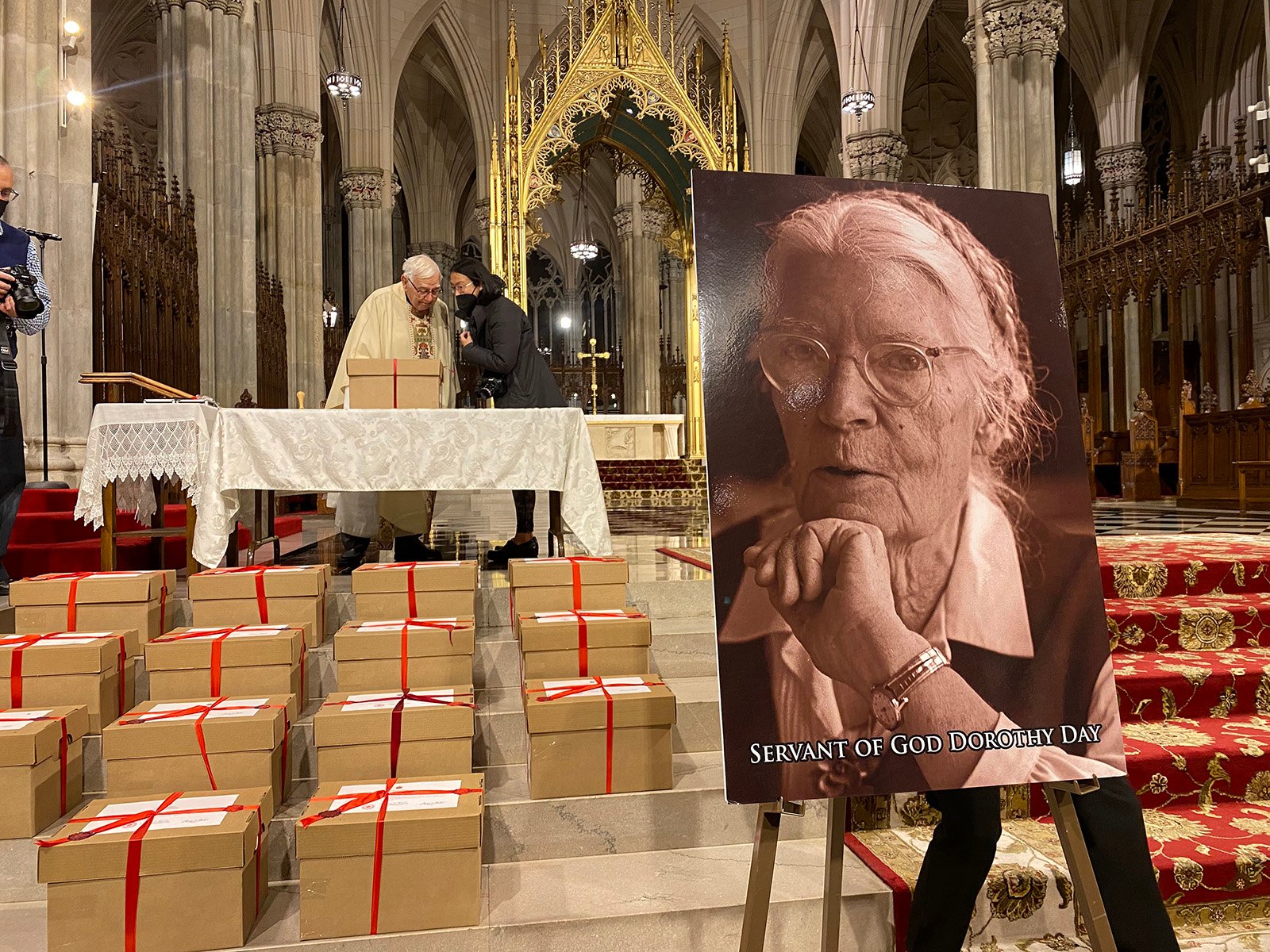 Cardboard boxes filled with evidence of Dorothy Day’s “reputation for holiness” sit after a Mass at St. Patrick’s Cathedral in New York, Dec. 8, 2021. The boxes will be sent to the Congregation for the Causes of Saints in Rome. RNS photo by Renée Roden

Day’s commitment to living in solidarity with the poor and to a way of life grounded in Catholic social teaching is also a challenge for many Catholics — including the hierarchy — to examine their relationship to money and power.

“When was the last time these bishops have addressed the culture of wealth, disparity, war and empire? They never mention that stuff,” said Frank Cordaro, who founded the Des Moines, Iowa, Catholic Worker house in 1976.

Born in 1897, Day dropped out of the University of Illinois to move to New York, where she wrote for leftist papers, marched for women’s suffrage and agitated for the rights of workers. In 1933, six years after her conversion to Catholicism, Day founded the Catholic Worker movement with Peter Maurin. Consisting of communities committed to clarification of thought, voluntary poverty and works of mercy, Catholic Worker houses now number more than 150 around the globe.

“This concept of a woman who dabbled in communism and sexual promiscuity who all of a sudden became very holy and eschewed her communist friends is just not true,” said Hennessy, in an interview at her grandmother’s birthplace in Brooklyn Heights, where Hennessy had led a small prayer service earlier on Wednesday afternoon.

“She was very well-integrated her entire life,” said Hennessy. “She was formed by socialism, by inequality in this country, and working families. Her pre-conversion life prepared her for her converted life.”

Day’s idiosyncratic life raises questions even among Catholic Workers about how it should be commemorated.

“The canonization process is a huge investment of time and money,” said Mike Wisniewski, a 40-year member of the Los Angeles Catholic Worker community. “How can we justify spending all this time and money when hundreds of thousands of our brothers and sisters are unhoused?”

Wisniewski said the LA community has resisted the canonization process from the start.

“First and foremost, Dorothy didn’t want to be called a saint,” said Wisniewski. “She didn’t want that attention and admiration. She wanted people to imitate her, not put her on a pedestal.”

Robert Ellsberg, another guild member, edited the Catholic Worker newspaper in the mid-1970s and edited the first published collection of Day’s diaries. He took ownership for popularizing Day’s line “don’t call me a saint” and wanted to set the record straight: “She believed we were all called to be saints,” said Ellsberg.

The point, for Ellsberg, isn’t that Day isn’t “too good” for the process of canonization, but rather that no one is exempt from her challenge.

Her objection to being dubbed a saint, Ellsberg said, was that it “was a way of kind of putting her on a pedestal” and letting proponents of the idea “off the hook to follow their own vocation as faithfully as she did.”

“We’re always told, ‘Oh, saints are just like us’ and they, you know, they have just these human experiences just like us,” Hammock told RNS. “And, actually, for most of the saints that I read about, I don’t feel that way.”

“I can see how we can be destined for holiness in our humanity when I’m reading Dorothy Day having a super boring day and being like, ‘We had strawberries for lunch,’ you know? That’s when I feel like, OK, yeah, maybe holiness is something that I can grasp as well.” 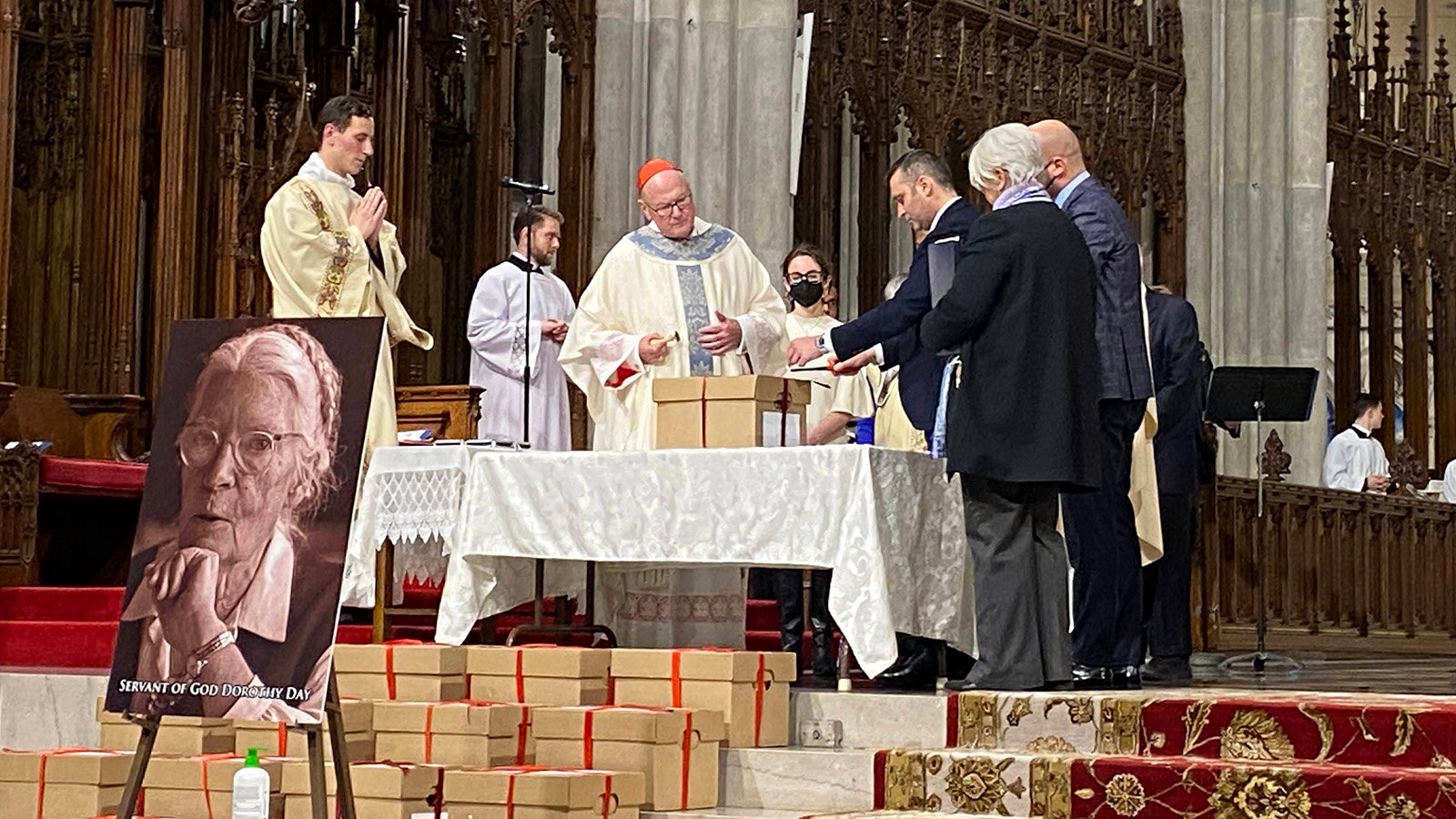 Cardinal Timothy Dolan, center, seals a cardboard box filled with evidence of Dorothy Day’s “reputation for holiness” during a Mass at St. Patrick’s Cathedral in New York, Dec. 8, 2021. The boxes will be sent to the Congregation for the Causes of Saints in Rome. RNS photo by Renée Roden

On Wednesday, Dolan’s homily pitched Day to the church full of young adults as a saint for them. The cardinal also related the story of how Pope Francis, during his 2015 visit to the U.S., praised Day as one of four Americans whose bold witness of faith should be a model for American Catholics.

Dolan asked the pontiff at the time to fast-track Day’s ascent up the ladder of institutional sainthood — by declaring her venerable, the second official step to sainthood. But because New York’s inquiry hadn’t been completed, the pope said his hands were tied, according to Dolan.

Day’s supporters believe nonetheless that the current pontificate is well disposed toward her sainthood cause.

“It seems quite clear that Dorothy Day is exactly the kind of saint Francis would like to promote,” said Ellsberg. “Her message couldn’t be more consistent with his agenda.”

Besides honoring Mary’s conception without sin, Dec. 8 is a landmark day in Catholic Worker history. In her autobiography “The Long Loneliness,” Day wrote that she prayed on Dec. 8, 1932, at the Basilica of the National Shrine of the Immaculate Conception in Washington, D.C., that “some way would open up for me to use what talents I possess for my fellow workers, for the poor.” Returning to New York, she met Maurin, a French peasant and Catholic agitator. Their meeting is considered the founding moment of the movement.

Maurin gave Day what many Catholic Workers said Day gave them — a way to be a Catholic in a mad, violent world.

What does it feel like to see one’s grandmother on her way to canonization? 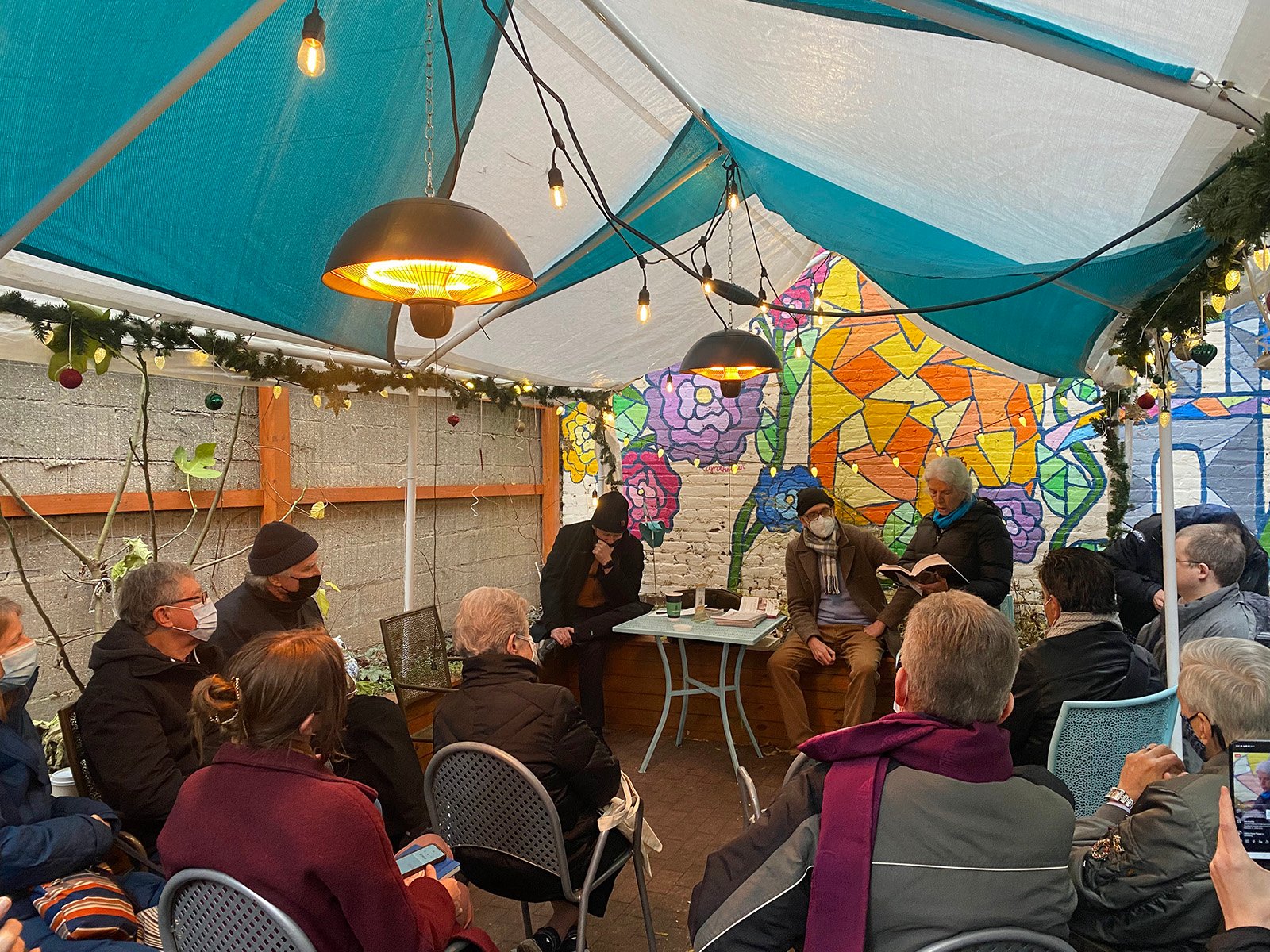 Martha Hennessy, right, Dorothy Day’s granddaughter and a member of New York’s Maryhouse Catholic Worker community, reads an excerpt from her grandmother’s book “On Pilgrimage” in the courtyard of the Vineapple Cafe in New York, Dec. 8, 2021. RNS photo by Renée Roden

Under a large tent in the chilly courtyard of the Vineapple Cafe on the first floor of Day’s former home at 71 Pineapple St., Hennessy read an excerpt from her grandmother’s book “On Pilgrimage” before a crowd of 30:

“While our brothers suffer, we must suffer with them. If our jobs do not contribute to the common good, we pray God for the grace to give them up. Everyone should be able to place his job in the category of the works of Mercy. This would exclude jobs in advertising, which only increase people’s useless desires, and in insurance companies and banks, which are known to exploit the poor of this country and of others. Whatever has contributed to the misery and degradation of the poor may be considered a bad job, and not to be worked at.”

These words, among millions of Day’s others, were boxed up in St. Patrick’s Cathedral in front of a crowd of well-dressed New Yorkers. Dolan praised Day’s commitment to poverty in his homily, but Cordaro, in Iowa, said that it was up to the members of the Catholic Worker movement to unbox Day for the Catholic Church.

“It’s up to her children and grandchildren in the movement to pose her challenge to the church that embraces her,” said Cordaro. “If we lose our edge as Catholic Workers, that’s when she just becomes another pious holy card.”