(RNS) — The Biden administration recently recommended that many Americans who have received Pfizer’s COVID-19 vaccine get a third dose — not just seniors, but also tens of millions of young, healthy adults.

This policy contradicts the recommendations of the U.S. Food and Drug Administration’s advisory panel, which sought to reserve those “booster” doses for seniors. It also defies pleas from the World Health Organization, which called in September for a global moratorium on COVID-19 boosters until the end of this year.

This flagrant dismissal of the WHO isn’t just an American phenomenon. The U.K. government is also pursuing a third vaccine dose to every person over 50 — some 30 million people.

It’s discouraging to see rich nations greenlight boosters for fully vaccinated individuals, who are already at very low risk of hospitalization and death, when nearly 3.5 billion people have yet to get the minimum two doses.

RELATED: Some pastors fear talking about vaccines. Bishop Horace Smith sees them as a blessing.

Civil society leaders, especially religious ones, need to take a stand and pressure wealthy nations to share their extra doses and resources more broadly. As U.N. Secretary-General António Guterres declared in July, “Vaccine equity is the greatest immediate moral test of our times.”

The COVID-19 vaccines developed over the past year are safe and effective. But for much of the world’s population, they are inaccessible. Less than 1% of the more than 6 billion doses administered thus far have gone to people in low-income countries. Africa is home to 17.5% of the global population but accounts for just 2% of globally administered vaccines. In India, officials have struggled to inoculate rural areas, where two-thirds of the country’s population lives.

The problem starts with a shortage of doses supplied by wealthier countries. COVAX, the vaccine donation initiative set up by WHO, has only received enough pledged doses to inoculate 20% of the world’s population.

If rich countries donated more of their surplus doses, far more lives could be saved. The United States, for instance, is slated to have hundreds of millions more doses than it needs by the end of this year.

Providing for the needs of “the least of these” — to paraphrase a certain Nazarene carpenter — is not just the morally right thing to do. It is what we must do for each of us to stay safe. As more than 60 faith leaders noted in a statement at the outset of the Pandemic in 2020, no one is safe until everyone is safe.

Allowing the virus to circulate gives it more chances to mutate and spawn new variants that may threaten the efficacy of our vaccines. That would endanger people in developed and developing countries alike, regardless of vaccination status.

This is not a hypothetical threat. COVID-19’s most insidious iteration so far, the delta variant, originated this spring in India, where about one-fifth of eligible adults are fully vaccinated, and now the omicron variant has originated from southern Africa.

If the shots had been shared more widely and there had been fewer vulnerable hosts in the variants’ earliest days, would it still sweep across the world? We will never know for certain. But it is fairly possible that more equitable distributions of the vaccines can prevent, or at the very least slow, the spread and save millions of lives. A Catholic nun wearing a protective mask reads outside the Immaculate Heart of Mary Parish Church that turned into a temporary vaccination center in Quezon City, Philippines on Friday, May 21, 2021. Philippine officials have been ordered not to disclose in advance the COVID-19 vaccine brands to be administered in immunization sites after those offering newly arrived Pfizer shots drew big crowds in what could be an indication of public preference for Western vaccines.(AP Photo/Aaron Favila)

Continued vaccine inequities will also harm the global economy. The U.N. Refugee Agency has warned: “If (rich countries) focus only on vaccinating our own populations, the world risks global GDP losses of up to $9.2 trillion.” That’s more than 10% of the world’s economic output. Half of these losses would be realized by high-income countries.

As the leader of Religions for Peace, the world’s largest center of interfaith dialogue, I see firsthand how faith leaders use their unparalleled reach, which depends on the deepest, widest-reaching, oldest-standing such platforms to promote health equity.

Religions for Peace’s World Council, composed of leaders representing all religious institutions and faith communities from across the world, has called for “unprecedented global cooperation” in distributing vaccines around the world fairly and equitably. We have also worked to make this goal a reality.

By engaging in public advocacy efforts across five regions and in eleven countries, our projects have promoted vaccine access and helped stop the spread of vaccine misinformation. We’ve participated in direct aid programs, delivering personal protective equipment and food to the most vulnerable areas.

The past 18 months have shown how faith and interreligious cooperation can be powerful tools for safeguarding and advancing public health across national and socioeconomic borders.

In fact, the Scriptures of nearly every major religion support vaccine equity. The Book of Acts describes believers who “held everything in common” and gave “to anyone who had need.” Both the Quran and the Talmud teach that “whoever saves a single life is considered … to have saved the whole world.”

Sadly, not all faith leaders have taken these messages to heart.

In many countries, some of the most notable purveyors of vaccine misinformation have been religious leaders. That may be part of the reason why, according to a Kaiser Family Foundation study, vaccine hesitancy is higher among white evangelical Christians than virtually any other demographic in the United States.

These leaders are squandering a huge opportunity to save lives. A survey this spring showed that 44% of vaccine-hesitant Americans said a “faith-based approach” — such as a pastor encouraging his flock to get the jab — could help them change their minds.

Religious leaders have a unique set of roles to play in ending this pandemic. In addition to encouraging vaccinations and setting a personal example in all countries, in richer nations they can use their moral authority to spur their political leaders to donate vaccines to poorer countries shattered by the virus. Vaccines are the most scientifically proven way to save lives. 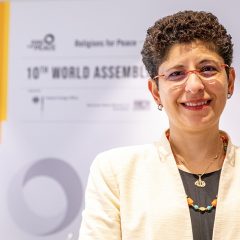 Helping faith leaders to work together with governmental and intergovernmental organizations as part of ongoing global efforts to save lives and build peaceful societies is not a choice; it is an imperative. We should not risk attempting to do this through multiple small efforts aimed at getting more money and branding for our own organizations. Faith-based organizations also need to collaborate to do this work together and thus set the example we are asking faith and government leaders to follow.

(Azza Karam serves as the secretary general of Religions for Peace. The views expressed in this commentary do not necessarily reflect those of Religion News Service.)