(The Conversation) — Southern Baptists have a long history of conflict over women’s leadership in the denomination. But women have found ways to lead, even as their roles have become ever more circumscribed.

I have been researching Southern Baptist women since the mid-1990s. In 1997, with my co-researcher, Tisa Lewis, I interviewed 29 of the 36 women who were enrolled in the Ph.D. programs from 1982 to 1992 at The Southern Baptist Theological Seminary, where Tisa and I were both students during the 1980s. I returned to this group in 2016 with another researcher, Kryn Freehling-Burton, to re-interview 17 of these women.

We found that many women had left the denomination for successful leadership roles in other churches, denominations, educational institutions and organizations.

What we learned from interviews

All the women we interviewed had entered seminary on the heels of the second wave of the women’s movement during the 1970s and ’80s. That was also the time of the fundamentalist takeover of the Southern Baptist Convention during the 1980s.

Fundamentalist Southern Baptists purport to read the Bible literally and believe it is without error in history and science as well as theology. Through a series of polarizing elections, fundamentalists wrested governing authority over the denomination from more moderate leaders and quickly curtailed the progress women had been making as ministry professionals and equal partners within the family.

None of the 17 women we interviewed in 2016 still identified as Southern Baptist. About a third of our participants did participate in one of the two groups that splintered from the Southern Baptist Convention following the takeover. The Cooperative Baptist Fellowship, the larger of the two groups, is theologically moderate. The Alliance of Baptists is progressive and focused on social justice. Both groups support women in ministry, and the alliance is openly supportive of LGBTQ people.

What we found in both sets of interviews is that these women were determined to follow their deep sense of vocation, despite changes in the Southern Baptist Convention. They were not dissuaded by fundamentalist arguments that women should not be ordained or lead men. Even though almost all of them ended up leaving the convention, they had successful careers leading in other places.

While women served in many capacities in Southern Baptist churches from the denomination’s beginnings, the question of ordination arose much later.

This changed by the late 1970s as the denomination felt the impact of the second wave of the women’s movement, and more women entered Southern Baptist seminaries, many with the intention of seeking ordination and serving as pastors. Only 10.6% of Southern Baptist seminary students were women in 1970. Enrollment records show that by the 1981-1982 academic year, women accounted for nearly 30% of the entering class.

At that moment, the convention seemed poised to embrace women’s leadership, with a number of denominational agencies, such as mission boards and publishing houses, issuing positive accounts of the women’s movement and encouraging women in ministry. Several prominent male leaders had started to speak out in support of women’s leadership, and the seminaries had begun to hire women to teach biblical studies and theology.

As my research shows, this trend played a significant role in fundamentalists’ motivation to take over the denomination. They targeted women, passing resolutions denouncing women in pastoral leadership, changing the denomination’s theological statement to stipulate women’s “gracious submission” to men and removing denominational leaders who voiced support for women in ministry. The lone woman ever to teach theology on the faculty of The Southern Baptist Theological Seminary was removed as well.

Back in 1997, one woman told us the story of how she had been invited to a campus interview for a position in the religion department of a Baptist university. Suddenly, all communication ceased. When she finally talked to a faculty member she knew at the university, he explained to her that the faculty had gotten “cold feet” because she was an ordained woman.

Fundamentalists in the Southern Baptist Convention, including fundamentalist women, saw the takeover as a “conservative resurgence,” a return to faithfulness to their literal interpretations of the Bible, including the limitation of women’s leadership.

Citing Eve’s responsibility for the fall of humankind in Genesis 3 and the Apostle Paul’s admonition for women to keep silence in the churches in 1 Corinthians 14.34, fundamentalists opposed women’s ordination, preaching, pastoral leadership and even teaching of teenage and adult men in Bible studies.

Women leading women was nothing new in the Southern Baptist Convention, however. Since the 1888 formation of the Woman’s Missionary Union, as a way for women to support missions, women have led women. In fact, many men in 1888 found the union to be a threat. One Baptist leader opined, “We … fear that such an independent organization of women naturally tends toward a violation of the divine interdict against woman’s becoming a public religious teacher and leader – a speaker before mixed assemblies, a platform declaimer, a pulpit proclaimer, street preacher, lyceum lecturer, stump orator.”

Indeed, when I talked to women in ministry in the early 2000s for my book “God Speaks to Us, Too: Southern Baptist Women on Church, Home, and Society,” many of them told me that what made them believe they could be pastors, professors and denominational leaders was their experience in the Woman’s Missionary Union’s program for girls, which told them, “You can be anything God calls you to be.”

Women’s leadership outside the SBC

Linda McKinnish Bridges, the former president and a founding faculty member of the Baptist Theological Seminary at Richmond in Virginia.
Baptist News Network, CC BY

While women within the Southern Baptist Convention accepted its limitations on their leadership roles, the women in my studies and many others left the denomination to find opportunities elsewhere.

One became the first female president of a Baptist seminary in the U.S., and another the president of a Cooperative Baptist Fellowship seminary she helped found after moderate Baptists left the convention. Many served as pastors of local churches, and several became college, university or seminary professors. Some became administrators at their schools. One entered the business world. 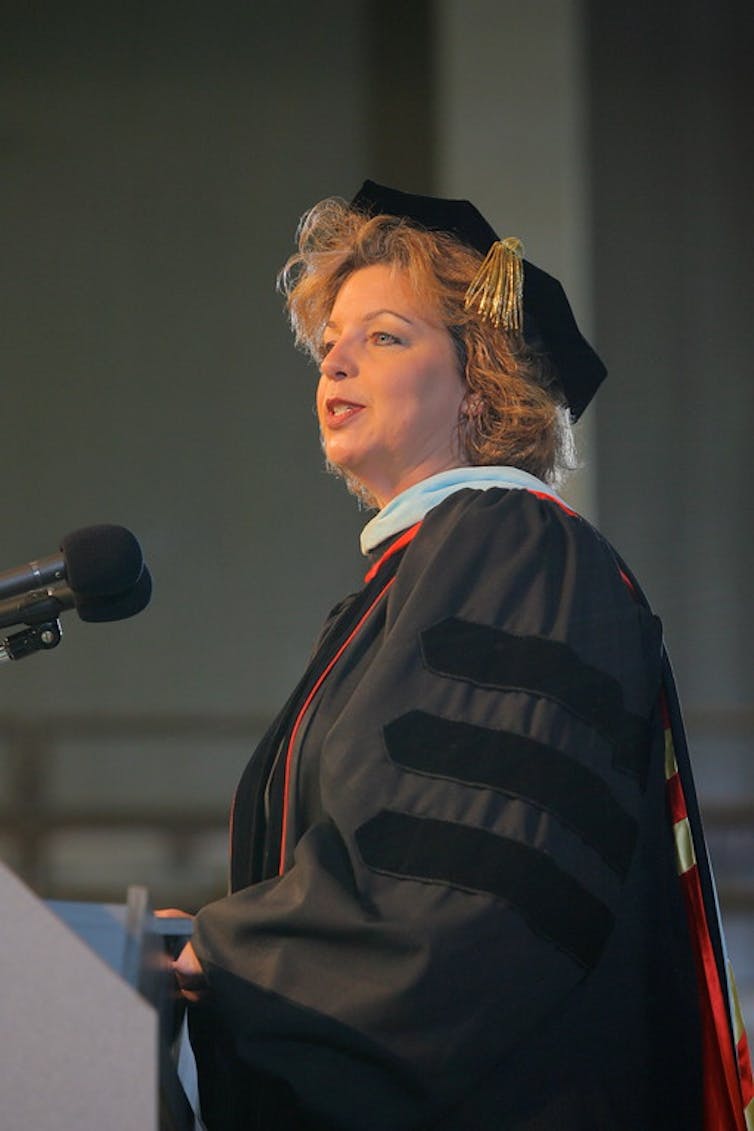 While a number of these women have now retired, they pointed to their legacy in the young women they mentored and for whom they served as the role models they never had.

The women in my studies noted that the battles of the 1980s equipped them to face struggles as women in leadership, even among moderates and progressives. One participant explained, “Being at Southern Seminary in all of the tumult solidified for good or ill the life lesson of ‘be true to yourself’ and that ‘you can’t be anyone other than who you are.’”

That these women redefined leadership while dealing with the challenges thrown at them is testimony to their resilience and commitment to their vocation. As one woman said, “People still found a way to be strong and to accomplish amazing things.”

(Susan M. Shaw, Professor of Women, Gender, and Sexuality Studies, Oregon State University. The views expressed in this commentary do not necessarily reflect those of Religion News Service.)