(The Conversation) — More Orthodox Jewish women around the world are following the path of ordination, though controversy over female rabbis continues in most Orthodox circles. But as more and more Orthodox women are showing, ordination is not the only route to religious leadership.

As a Jewish Studies professor who researches gender and religious authority, I have spent five years interviewing and observing Orthodox women who have been ordained. I have also spent several years researching the expansion of women’s leadership roles outside the rabbinate, and the growing acceptance of their authority.

Just a decade ago, only a handful of women had been ordained by Orthodox rabbis – decades after their peers in more liberal Jewish denominations. But in 2013, the “stained-glass ceiling” blocking women’s leadership shattered, as the first group of female rabbinical students graduated from a New York seminary called Yeshivat Maharat.

Today, almost 50 Orthodox women have been ordained at Yeshivat Maharat. But other roles for women are growing and changing more quickly, with many serving as guides to Jewish law, professionally trained rabbis’ wives and congregational scholars.

Yoatzot halacha, who are “advisers” or “guides” to Jewish law (halacha), are women who have studied Jewish legal texts on topics such as sexuality, intimacy, pregnancy, birth and what Orthodox Judaism calls “family purity” laws, which deal with menstruation. They also provide counseling to Jewish women about a variety of issues related to marriage, relationships, sex and reproduction.

Training for yoatzot halacha, or yoatzot for short, began in 1997 at the Nishmat program in Israel. Graduates answer questions posed on the phone or online. When the first class graduated in 1999, many of them began working on the yoatzot hotline. Today, Nishmat’s yoatzot have answered over 100,000 questions.

Many yoatzot work in communities in the U.S., the U.K. and Israel. They can authoritatively answer questions about the laws of Taharat Hamishpacha, or “family purity,” and teach classes about them. Some yoatzot are hired by individual synagogues, while others are employed by a community, with their salary paid by multiple synagogues.

Yoatzot and their advocates make it clear that they are not rabbis and often define their authority as focusing on the laws of family purity. Yet they present an alternative mode of legal decision-making on these issues that sometimes cut ordained rabbis out of the picture.

In my own research, I’ve seen how the way yoatzot provide answers differs from a rabbi. When yoatzot answer questions about family purity, they answer based on their understanding of Jewish law as well as their own personal experiences observing these laws. It is precisely this expertise and empathy that draw Orthodox women to turn to yoatzot and not rabbis.

Yoatzot also answer questions brought anonymously through the website, which is a significant shift from how rabbis are used to answering legal questions one on one. They might also engage in longer conversations about marital happiness and sexual satisfaction.

The professionalization of the rebbetzin

For generations, the closest women could come to being religious leaders was to marry them instead. But in recent years, the role of the rabbi’s wife, called a rebbetzin, has become more professionalized, with formal training and institutional authority – as is true of many Christian preachers’ wives, as well.

The Orthodox Union’s Jewish Learning Initiative on Campus has placed rabbinic couples on more than 20 college campuses in North America to mentor, teach and guide Jewish students. The program says it trains Orthodox rabbis and their wives to help Orthodox students on secular campuses “balance their Jewish commitments with their desire to engage the secular world.” Husbands’ positions are full time, while their wives’ are part time. They receive distinct training and are paid separately.

Even ultra-Orthodox rebbetzins formally serve as outreach activists to non-Orthodox Jews. Often, young couples will receive training for their future roles while living in Jerusalem for several years. The organization Ner LeElef, for example, trains men and women separately in the skills they will need as outreach activists. Women’s positions include traditional women’s tasks like cooking and hosting guests, as well as teaching classes and recruiting unaffiliated Jews into the ulta-Orthodox movement.

Many ultra-Orthodox rebbetzins leverage the internet to further their outreach. Women refer to their roles as one of spiritual leadership, not “clergy.” This term is meant to distinguish them from rabbis while simultaneously creating a unique leadership position.

Finally, Orthodox women have benefited from an increase in opportunities for them to study rabbinic texts, particularly the Talmud, which is often seen as a catalyst for their religious leadership.

The first women’s seminary opened in Israel in the 1980s, and since then, Orthodox women have had several more options for advanced Talmud study in the U.S. and Israel. Of note is the Drisha Scholars Circle, which until 2014 educated women in the same material that men would study for ordination. Yeshiva University in New York has been offering students a similar opportunity for advanced Talmud study through the Graduate Program in Advanced Talmud Studies for Women.

Women who have received this high level of religious education have also been holding positions of leadership in synagogues.

Take Lincoln Square Synagogue in New York, which has a history of pushing boundaries regarding women’s involvement in synagogue ritual. In the early 1970s, it was among the first Orthodox synagogues in New York to hold a bat mitzvah, the girls’ version of a coming-of-age ceremony that was traditionally only available to boys. In the late 1990s, Lincoln Square Synagogue hired its first female congregational intern, and has had several since – many of whom completed advanced Talmud studies for women or had Ph.D.s in Jewish Studies.

Other Orthodox women with Ph.D.s serve in positions of congregational leadership elsewhere. Dr. Mijal Biton, for example, is not ordained but is the Rosh Kehilla, or “head of the community,” of The Downtown Minyan in New York.

As they offer classes and answer questions for women, female religious leaders are creating a new cadre of educated Orthodox women. Jewish philanthropies, meanwhile, are investing in women as congregational leaders in order to inspire the next generation. Together, they are formalizing new spaces for women within the Orthodox Jewish community and changing how girls in their communities see their own potential.

(Michal Raucher, Assistant Professor of Jewish Studies, Rutgers University. The views expressed in this commentary do not necessarily reflect those of Religion News Service.) 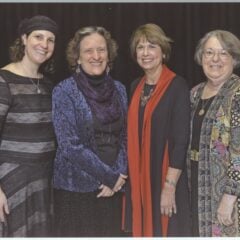 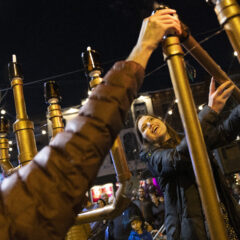 News
More Orthodox Jewish women are ordained; change is uneven
Follow us on Facebook!
Submit your photos to RNS