VATICAN CITY (RNS) — A panel of women who have attained leadership positions in the Catholic Church met on Thursday (Dec. 16) to discuss Pope Francis’ ambitious plan to reform the power structures in the church, raising questions about female ordination, the role of bishops and the need for women theologians.

In October, Francis launched a churchwide consultation process titled “For a synodal Church — Communion, Participation and Mission,” commonly known as the Synod on Synodality. The three-year process, which will conclude with a summit of bishops at the Vatican in 2023, is intended to engage every level of the Catholic Church, from parishes to bishops’ conferences.

The pope’s project, if successful, is poised to increase the participation of the most marginalized groups in the church, including women.

“Our role is to invite more and more women in, into the process, into the conversation and reflection,” said Sr. Patricia Murray, executive secretary of the International Union of Superiors General and a member of the spirituality commission of the Synod. “Particularly those who feel very much neglected, or that the church has forgotten about them or feel estranged from the church.”

Hosted by the Australian embassy to the Holy See, Georgetown University and the Jesuit magazine Civiltà Cattolica, Thursday’s “Women in Synodality” event also included Sr. Nathalie Bequart, the first female undersecretary of the Synod of Bishops; Myriam Wijlens, one of the church’s few female canon lawyers and a consultant to the Synod of Bishops.

At the meeting there were also Sr. Béatrice Faye, a member of the Theological Commission of the synod and member of the Groupe Africain de Recherche en Philosophie Interculturelle, and Susan Pascoe, who works on the Methodology Commission of the Synod and is the President of the Australian Council for International Development. 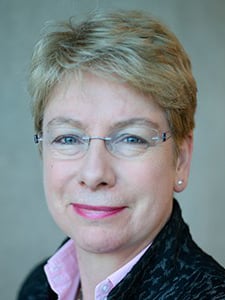 Many of those following the event via Zoom voiced doubts about how much women will be heard in the synodal process, and particularly whether bishops will accept the shared decision-making that Francis envisions.

“These are very important questions,” replied Wijlens. “What does it mean to be a bishop in a synod?” She noted that when bishops convene at the Vatican, they express not their own views, she added, but they have a responsibility to give voice to the joys and the challenges of the faithful in their community.

“Theologically the idea would be that the bishop would be a witness to the faith of his own church and not speak of his own faith,” Wijlens said. “I do hope the bishops have the courage and the braveness to say: ‘This is what the people in my church believe and what they want to share with the rest of the community.’”

In 2018, America magazine published a groundbreaking study by the Georgetown University Center for Applied Research in the Apostolate, or CARA, which showed that more than 70% of young women in the United States were drifting away from the Catholic Church, and at a much higher rate than men.

The report found that 38% of the respondents left because they disagreed with church teaching, while 23% objected to the status of women in the church.

More than four years after America’s report, many more women occupy leadership roles in the church and at the Vatican, but little has changed in terms of linking the traditions of the faith into the concerns of modern-day women.

Wijlens said that the church can do more than listen; she suggested that promoting female theologians and canon lawyers might deepen the understanding of traditional Catholic beliefs about gender.

“I think we are losing in the church a high number of highly trained women, and it’s because they feel that they are not being heard,” she said, suggesting that canon law faculties should reach out to women and help them achieve this expensive and specialized training.

Murray talked about recent reports of physical, sexual and psychological abuse of religious sisters, reports that have also undermined the credibility of the church’s commitment to women. “If we do not listen to the pain that has been suffered, we won’t see where we are individually called to change and called to conversion,” she said. “I think if we fail to do that, the synodal journey will seem to be incomplete.”

Murray also said that it’s important for the synod to address female ordination and the diaconate for women, topics usually set aside when discussing the role of women in the church.

While Francis has said that the ordination of women to the priesthood is out of the question, he created two commissions to study the possibility of women becoming deacons, who may not perform the sacraments but serve at Mass and preach the homily.

“We are looking at a reevaluation of all the roles in the Catholic Church,” Murray said, especially when it comes to different forms of ministry in various parts of the world. “It’s a long journey,” she added, and “this is not for the faint hearted, it’s not for quick and easy answers.”

RELATED: A child is coming to save us. Perhaps he’ll remind us to do better by the children we have.