(RNS) — The Satanic Temple of Illinois’ contribution to a holiday display in the Illinois Statehouse rotunda in Springfield Monday (Dec. 20) — a swaddled baby version of the deity Baphomet — has drawn fire from the local Catholic bishop, who requested that the temple not be included.

Bishop Thomas John Paprocki said in his Nov. 30 remarks at the installation of the Statehouse’s Christmas Nativity scene that satanism “should have no place in this Capitol or any other place.”

The Baphomet figure, designed by artist Chris Andres, sits alongside a Christmas tree, the Nativity scene and a menorah.

“Many religions present symbols of their faith at the Capitol. Rather than view these as competing displays, we want the community to appreciate the rich diverse tapestry of beliefs and cultures,” said the Satanic Temple’s director of campaign operations, Erin Helian, in a statement.

ARCHIVE: The Satanic Temple is a real religion, says IRS

Adam said Paprocki’s condemnation of the Baphomet display “came out of left field,” calling it “divisive.” The temple hadn’t applied yet when the remarks were made.

Temple members weren’t the only ones to publicly respond. Nathan Maddox, “a lawyer who advises on which displays may be erected,” wrote in an op-ed for the State Journal-Register that he declined the bishop’s request and would not reject the temple’s application.

“I do not want to be able to tell someone their beliefs are offensive and may not be expressed in the Capitol building, nor do I want to live in a country where government officials have such power.” 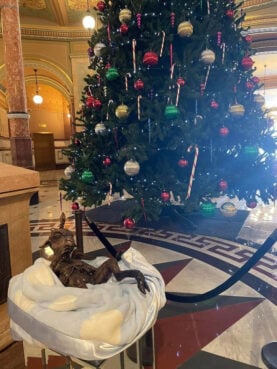 When the group finally scheduled the installation, members invited the community to attend, specifically welcoming Paprocki. “The Illinois state Capitol is a place of religious plurality and unity,” Adam told Religion News Service. “We want to celebrate all people.”

More than 50 onlookers attended the installation of Baphomet, of whom only 10 were members of the temple, he estimated. Among them were protesters who sang and chanted prayers. Some held banners saying “Satan has no rights!” and “Begone Satan! Mary Crushes the Serpent!”

The group of protesters was organized, in part, by the American Defense of Tradition, Family and Property, described on its website as “an organization of lay Catholic Americans concerned about the moral crisis shaking the remnants of Christian civilization.”

Also in attendance was Republican state Sen. Darren Bailey and his wife, Cindy. In a public Facebook post, Bailey, who is running for governor of Illinois, said, “I met with other prayer warriors at the Capitol today to pray for our state.”

Bailey also linked social policy to the temple’s installation. “We have all been appalled by some of Springfield’s extreme and evil legislation, but just when we thought it couldn’t get worse … they are going to allow a satanic display in YOUR rotunda at the Capitol,” he wrote.

In past years, the temple’s display was a snake wrapped around an arm and a hand holding an apple. The sign read “Knowledge is the greatest gift.”

Despite attempts to disrupt the installation ceremony, members of the Satanic Temple Illinois were unfazed by the protesters’ presence, even calling the singing “beautiful.” 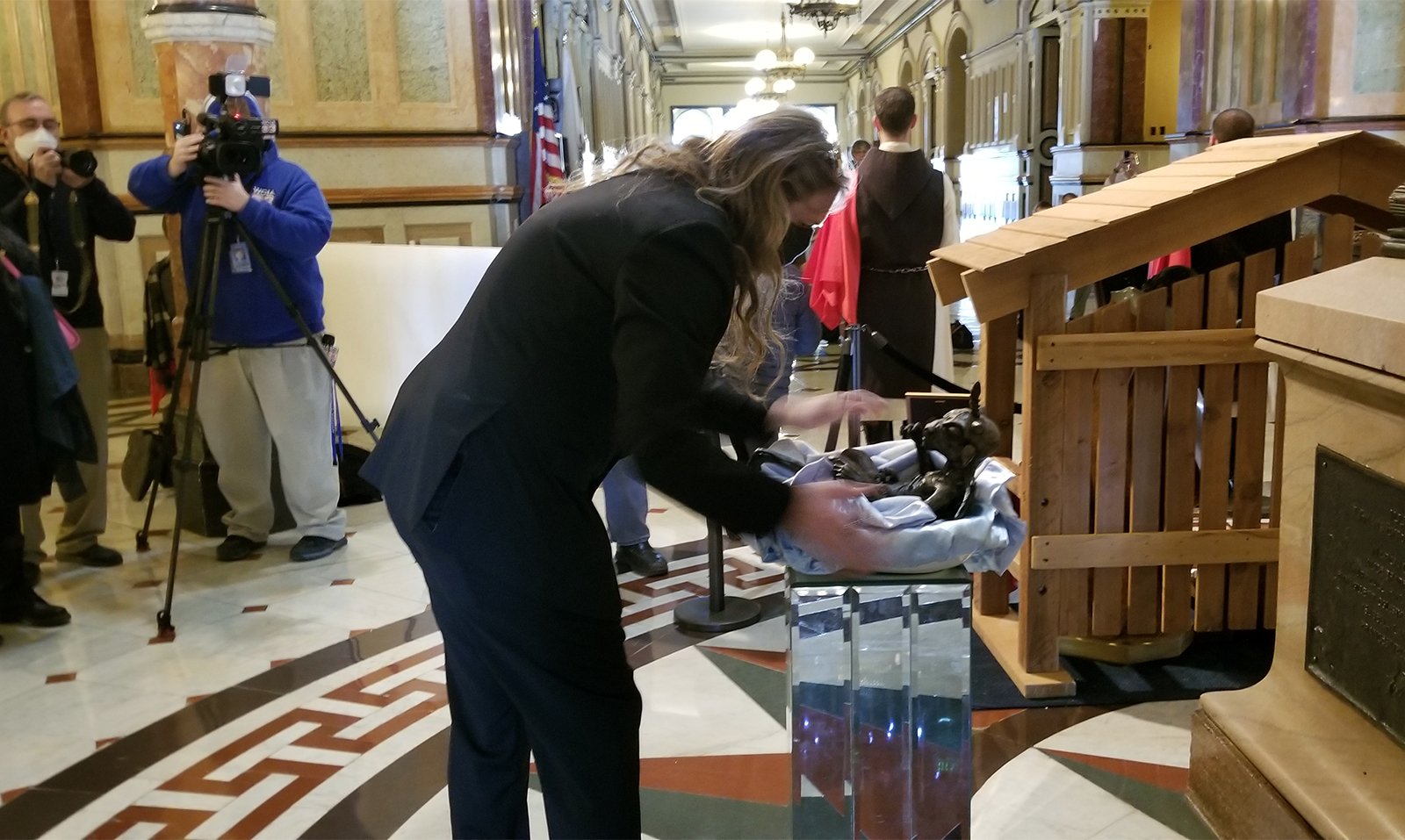 Adam delivered his own prayer, calling for his group’s god to bring “wisdom, justice and rationality to these chambers.”

While temple members were disappointed that Paprocki declined their invitation to attend, they were “grateful that some of his flock attended,” Adam said.

“What better way to show unity than to welcome those who oppose us in the spirit of coming together this holiday season.”