LOS ANGELES (RNS) — The California Department of Education is removing the Mayan principle called “In Lak’Ech” from its model ethnic studies curriculum to settle a lawsuit from three San Diego parents and a nonprofit claiming the affirmation promotes Aztec gods.

Also to be removed from the curriculum is the “Ashe” affirmation, used by practitioners of Ifá, a Yoruba religion originating in West Africa but now practiced throughout the Americas. Ashe means “the power to make things happen.”

Under the curriculum, which is not mandated, the affirmations were included as suggestions for educators to use “to bring the class together, build unity around ethnic studies principles and values.”

But, according to the lawsuit, these concepts represent a “governmental endorsement of religion that is not permissible.”

The state model curriculum was finalized in March as a guide for local high schools developing ethnic studies courses, which students, beginning in 2026, will be required to take in order to graduate from high school.

The San Diego-based group Californians for Equal Rights Foundation argues in the September lawsuit that the state’s new ethnic studies curriculum violates the religious clauses of California’s constitution that require “even greater separation of church and state.”

The group, which was created to push back on what it says are “legislative attempts that would reinstitute racial and gender preferences in government programs,” has also advocated against critical race theory. In April it filed a complaint against the San Diego Unified School District, claiming that training materials “force teachers to adopt CRT practices in their own classrooms.” 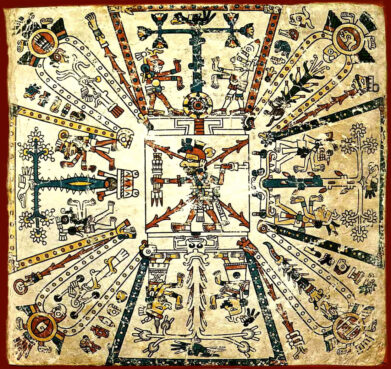 From the Codex Fejérváry-Mayer, an Aztec cosmological drawing with the god Xiuhtecuhtli, the lord of fire, and the calendar in the center with the other important gods around him, each in front of a sacred tree. Image courtesy of Creative Commons

Deleting the affirmations, state officials said in the agreement, affirms their “long-standing commitment to ensuring appropriate treatment of religion in a secular public education context.”

Even so, state officials make clear in the agreement they are denying and disputing the lawsuit’s allegations and settling to “avoid the costs, expense and uncertainty” of prolonged litigation.

State education officials will have to issue a public notice of the deletions to all California school districts, charter schools and county education offices.

The California Department of Education will pay $100,000 for the plaintiff’s attorney fees.

“Our state has simply gone too far in attempts to promote fringe ideologies and racial grievance policies, even those that disregard established constitutional principles. Endorsing religious chants in the state curriculum is one glaring example,” Xu said in a statement.

But to Nolan L. Cabrera, associate professor of education at the University of Arizona, it is “asinine to think that they’re trying to establish the Aztec religion” as part of the curriculum.

“In the bigger picture, it seems more like an extension of the concerted attacks on ethnic studies. This is just a new way of going about it,” Cabrera told Religion News Service in September.

Cabrera said a big part of Chicano studies is “trying to disrupt the myth that Chicano students are in some way foreign to this land.” This includes learning about different Indigenous traditions, he said.

He pointed to In Lak’Ech as an example, noting it translates into “you are my other me,” and as the curriculum detailed, embodies “love, unity, mutual respect.”

“This is about a culturally affirming, culturally restoring education practice that also has the impact of being incredibly effective, especially for Chicano students who are exposed to it,” Cabrera said.

The lawsuit was filed by attorneys from the Thomas More Society and LiMandri & Jonna LLP, who in July sued the San Diego Unified School District for removing the Rev. Junípero Serra’s name from one of its high schools.