(RNS) — Brian Houston, co-founder of the Hillsong megachurch and media empire, announced that he is stepping aside as global senior pastor, telling worshippers via a pre-recorded video played during the Sunday morning service at Hillsong’s Sydney, Australia, headquarters that he would be taking a leave of absence from the church until the end of this year.

Citing a decision by the Hillsong board and external legal counsel, Houston, standing with his wife and co-founder, Bobbie, said “best practice” dictates that he absent himself completely from church leadership as he faces trial for allegedly failing to report sexual abuse. The court proceedings, he said, are “likely to be drawn out and take up most of 2022.”

“It’s been an unexpected season, and we are thankful for you all and for the community we share,” Houston said on the video streamed toward the end of the service. “I never get tired of the praise reports and miracles, especially those committing to Jesus.”

Houston’s leave of absence comes after more than a year of scandals have rocked the church both in Australia and abroad and amid Houston’s own legal troubles at home. Houston stepped down from the board of Hillsong in September.

“The result is that the Hillsong Global Board feel it is in my and the church’s best interest for this to happen, so I have agreed to step aside from all ministry responsibilities until the end of the year,” Houston said in the January 30 video announcement.

Houston, 67, was charged in August with concealing a serious indictable offense of another person. Police say his late father, Frank Houston, also a preacher, indecently assaulted a young male in 1970. Court documents allege Houston knew of his father’s abuse as early as 1999 and “without reasonable excuse,” failed to disclose that information to police.

His lawyers told the court in October that Houston would plead not guilty, but his trial has been delayed multiple times, according to Perth Now. 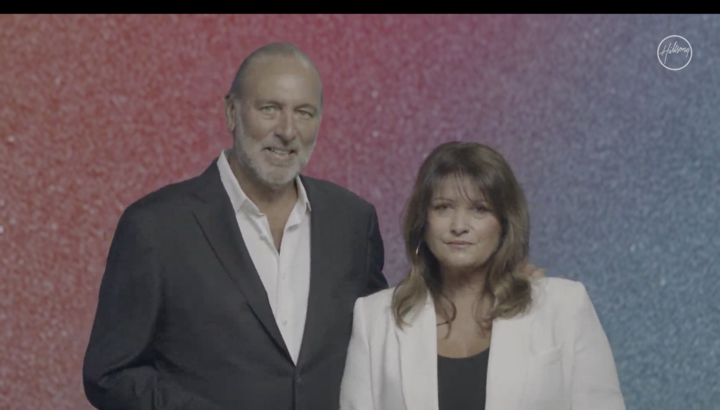 Brian and Bobbie Houston in a screengrab of a video announcing that he is taking an extended leave from leadership of Hillsong, the global megachurch the couple founded. January 30, 2022. Video screengrab

In his statement to the church Sunday, Houston said the allegations came as a “shock.” He said that he plans to “fight the charge and welcome the opportunity to set the record straight,” and that he needs “to be fully committed to preparation and engagement with the case.”

The board is supportive, Houston said, and they “have talked about the effects of the situation with my father, which go back many years up to the current legal case, and the impact this has had on me emotionally.”

Phil and Lucinda Dooley, the lead pastors of Hillsong Church Cape Town, will step in as the interim global senior pastors, according to Houston. His wife, Bobbie, will remain “fully engaged in church life,” and her leadership positions, he said.

“It is 50 years this week since I commenced Bible college in New Zealand, so with five decades of active ministry behind us, be assured we will make the best of this season to replenish spiritually, emotionally and physically,” Houston said.

Houston, a New Zealand native, founded Hillsong Church with Bobbie in 1983 in the suburbs of Sydney. An evangelical church affiliated with the Pentecostal network of Australian Christian Churches, Hillsong now boasts 30 locations around the world, with an average global attendance of 150,000 weekly. Two Hillsong College campuses, in Sydney and Phoenix, Arizona, offer “biblical training” and “ministry experience.”

The church’s growth was, in part, spurred by its wildly popular worship bands and their music, now nearly ubiquitous in churches around the world.

Though accusations of covering up his father’s alleged abuse have dogged Houston for much of his career, more recent concerns have arisen over how Houston and Hillsong have handled allegations of abuse within the church.

Anna Crenshaw, an American student who attended Hillsong College in Sydney, was touched inappropriately by a Hillsong staffer, Jason Mays, the son of the church’s human resources chief, at a party in early 2016. Crenshaw didn’t tell Hillsong leadership about the incident for two years and told RNS in May that she believes there is “a lack of institutional accountability” and a cultural tendency at Hillsong “to value those ‘higher up’ or more connected.”

Crenshaw said that while Hillsong leadership took her accusations seriously, they were slow to take action and that Houston seemed initially dismissive of Mays’ behavior, saying Mays was “just young, drunk, stupid, and in a bad situation.”

Mays pleaded guilty to indecent assault in 2020 and received two years’ probation and mandatory counseling. A church spokesperson told Vanity Fair magazine that Mays was banned from ministry for 12 months before being reinstated in his administration role and as a volunteer singer.

Elsewhere, the megachurch, famed for attracting celebrities such as Justin Bieber and Chris Pratt, has come under fire for treating pastors as “royalty” and reportedly favoring high-profile attendees while asking volunteers to work long hours that left many complaining of “the Hillsong hangover” after weekends serving at the church.

And, in May 2021, a former staff member at Hillsong’s New York church came forward with allegations that former pastor Carl Lentz had subjected her to “bullying, abuse of power and sexual abuse” over the course of seven years as she worked as a nanny in Lentz’s home.

In a statement at the time, the Houston’s commended the staffer for coming forward and said they welcomed the “opportunity to grow in what is an increasing societal problem.”

Lentz, who had established Hillsong’s Manhattan church with the Houstons’ son Joel, had been fired about six months earlier for “moral failings” and admitted to an adulterous affair. In the aftermath, Hillsong conducted an outside investigation into Hillsong East Coast and Lentz that Houston said found “significant ways” the New York City church “failed to reflect Hillsong global culture.”

While the investigation was being conducted, Reed and Jess Bogard, lead pastors of the Dallas location, abruptly resigned during a Sunday morning service. Houston later said the couple, who had served in New York with Lentz, “failed to meet the commitments and standards of Hillsong Church,” and the Dallas location has since been shuttered for the foreseeable future.

In April 2021, Darnell Barrett, a pastor for the Montclair, New Jersey, Hillsong campus, resigned after sharing revealing photos of himself on Instagram stories to a group of friends that included a woman who once volunteered for him at the New Jersey church.

News
Disgraced founding pastor Brian Houston feuds online with Hillsong about his wife’s future
Follow us on Facebook!
Submit your photos to RNS