(RNS) — There’s a point in every conflict when the momentum seems to shift toward war. In Ukraine, it can seem, when we tune to TV news or turn on our computers, that the path to another endless war is being laid. Russian forces are massed on the border, ordinary Ukrainians are arming themselves and the United States is preparing to send more troops to Eastern Europe.

But war is not the answer, and never inevitable.

As Quakers, we are called to “seek peace and pursue it,” as the Bible’s Psalm 34 says. Our faith teaches us that violence is always wrong. Lasting peace can only be achieved by peaceful means.

Yet as diplomats negotiate to end the crisis, the Pentagon is preparing to deploy thousands of troops. President Joe Biden and Congress are considering proposals to expedite weapons shipments to Ukraine and tighten sanctions on Russia, as these leaders seem to believe that threats and intimidation will strengthen the hand of our diplomats and force Russian President Vladimir Putin to back down.

But punishment and threats of violence are not a good negotiating strategy. These coercive tactics make it far more difficult to find our way out of a crisis and toward a just, peaceful and lasting solution to the conflict.

If we have learned anything from the last 20 years of the war on terror, it’s that military gains are short-lived and exact a high human, financial and moral cost if we don’t address the underlying disputes and grievances.

Rather than a militaristic approach to foreign policy, we — together with heads of other faith-based organizations — call on our leaders to invest in efforts to sustain peace and prevent harm to civilians, who always suffer most from war. Only by vigorously pursuing all avenues for peace can we fulfill our sacred duty to respect the equal dignity and worth of every person.

Instead of de-escalating the conflict and preventing a new war, our political leaders are backing us and our NATO allies into a corner where the rush toward war may overtake diplomacy.

In 1998, as NATO prepared to expand its membership to include Poland, Hungary and the Czech Republic, I traveled to Eastern Europe to meet with local activists calling for an end to — not an enlargement of — the military alliance. It was not just peace advocates who opposed expanding NATO. Cold War architects and realist thinkers, including George Kennan, Henry Kissinger and Zbigniew Brzezinski, all argued that expansion of the Western alliance would be viewed by Moscow as a hostile action and could set the stage for superpower confrontation.

It’s no wonder that with NATO pushing right up against its borders and advanced weaponry flowing into Ukraine, Russia feels encircled. NATO expansion creates the very fears, suspicion and mistrust in Russia that it is designed to allay in NATO’s newest members.

It also perpetuates the myth that peace and security can be created through military might.

The end of the Soviet Union presented a historic opportunity to reshape relations between the United States, Europe and Russia, all while demilitarizing the global order. Instead, 30 years later, we find ourselves facing the possibility of a new war between Russia and the NATO alliance — one with high risk of setting off a nuclear exchange.

One thing ought to be vividly clear: We can’t make ourselves more secure by making others less so.

The United States should commit itself to building, strengthening and participating in collective security systems that are not based on the use of force. Our country helped create the United Nations, and we should lead again in updating and strengthening our multilateral system to more effectively prevent war, ensuring security for all.

The United States withdrew its last ground troops from Afghanistan less than six months ago. The last thing our troops, our country, the people of Ukraine, the people of Europe, Russia and the world need now is another war.

(Bridget Moix is the fifth general secretary of the Friends Committee on National Legislation in its 80-year history. She also leads two other Quaker organizations, Friends Place on Capitol Hill and the FCNL Education Fund. The views expressed in this commentary do not necessarily reflect those of Religion News Service.) 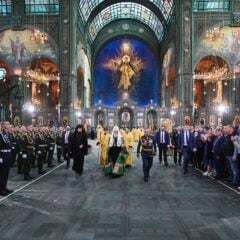