(RNS) — Back in 2013, creating a pathway to citizenship for millions of undocumented immigrants in the U.S. was the rare issue that virtually all major American religious groups could agree on. The cause was so unifying that conservative evangelicals joined liberal leaders from other faiths that year to muster an unsuccessful but vibrant faith-based campaign to push Congress to pass immigration reform.

But according to a new poll from the Public Religion Research Institute, that united religious front on the issue may be a thing of the past.

In a survey released on Thursday (Feb. 3), PRRI found that, while overall support for a pathway to citizenship has remained virtually unchanged between 2013 and 2021 (63% to 62%), some faith groups have undergone notable shifts. Support among white Catholics dropped from 62% to 54%, for example, and those who claim a non-Christian religion dipped from 68% to 55%.

The most notable shift occurred among white evangelicals: In 2013, most of them (56%) backed a pathway to citizenship in 2013, but now only 47% say they support it today. That makes white evangelicals the only religious group without a majority who support a pathway to citizenship, a difference that widens when limited to those who attend religious services weekly or more (58% to 45%). “Support for a Pathway to Citizenship for Undocumented Immigrants, 2013-2021, by Religious Affiliation” Graphic courtesy of PRRI

But while small downward shifts also occurred among white mainline Protestants (61% to 59%) and Hispanic Catholics (74% to 70%), some faith communities trended in the opposite direction. Black Protestants are now the most supportive religious group regarding a pathway to citizenship, rising from 70% in 2013 to 75% in 2021. Support among religiously unaffiliated Americans also increased to 69% from 64%.

Meanwhile, several major groups are now more likely to describe immigration as a “critical issue.” In 2013, it was a minority position among white evangelicals (38%), white Catholics (36%) and white mainline Protestants (32%). But last year, majorities of all three said they see the issue as critical, with white Catholics topping the list (57%).

Religiously unaffiliated groups barely changed how they gauge the importance of the issue in that same period, rising only two percentage points to 32%. 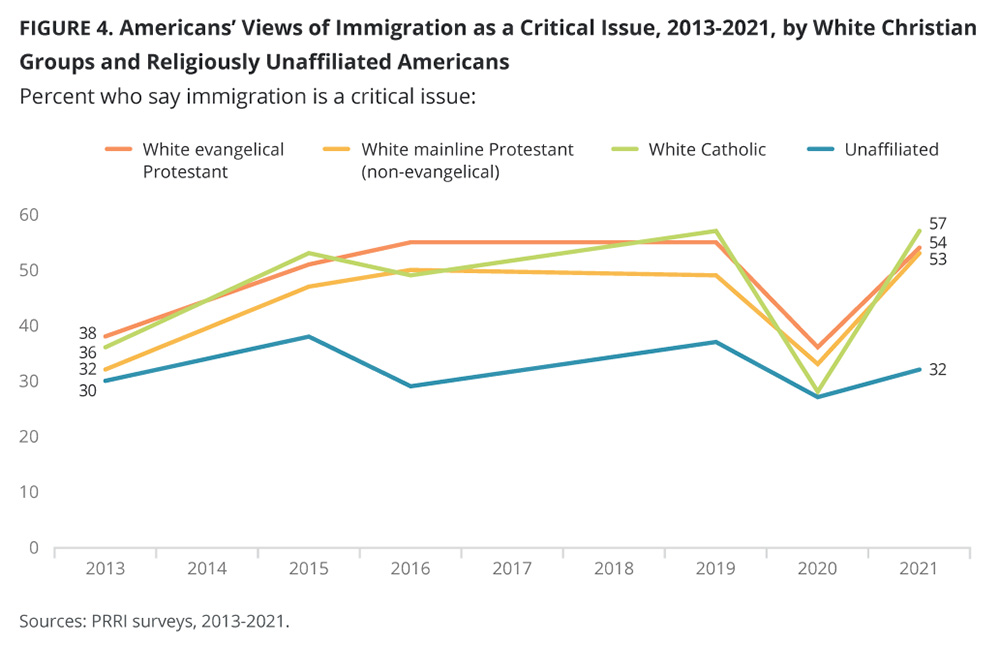 “Americans’ Views of Immigration as a Critical Issue, 2013-2021, by White Christian Groups and Religiously Unaffiliated Americans” Graphic courtesy of PRRI

Among white evangelicals who do view immigration as a critical issue, only 34% expressed support for allowing undocumented immigrants to become citizens provided they meet certain requirements. They were more receptive (41%) to allowing immigrants brought illegally to the U.S. as children to gain legal status, a policy known as Deferred Action for Childhood Arrivals, or DACA.

Former President Donald Trump’s rhetoric and hardline policies regarding immigrants were widely decried by religious liberals but often embraced by evangelical Protestants, who were some of his most stalwart supporters.

Trump’s attempt to “wind down” DACA, for instance, was condemned by myriad faith groups in 2017 but drew praise from some of his evangelical advisers.

In some ways, white evangelicals have remained the same, such as whether those surveyed agreed that “the growing number of newcomers from other countries strengthens American society.” White evangelicals remain the group least likely to say yes, barely shifting from 38% to 35% from 2011 to 2021.

The religiously unaffiliated, meanwhile, saw a marked shift and are now the group most likely to say immigrants strengthen society: Support shot up from 65% to 74%. An even more dramatic change took place among Black Protestants: While only 48% agreed in 2011, 69% do now.