VATICAN CITY (RNS) — Recent reports on the clerical sexual abuse scandals in France and Germany have put the spotlight once again on the Catholic Church in Italy, which has so far avoided confronting the history of abusive priests in the country.

Advocates for victims in Italy believe it’s time for the local church to allow a thorough investigation into claims of sexual abuse by priests but lament a “conspiracy of silence” between the Catholic institution and the Italian state.

“Italy has a big problem,” said Francesco Zanardi, founder of Rete L’Abuso, Italy’s largest network for victims of clergy abuse, in an interview with Religion News Service on Monday (Feb. 21).

In Italy “the dynamic of stopping sexual abuse is entirely in the hands of the church,” he said, adding that “the state doesn’t interfere.”

Zanardi, a clerical abuse survivor himself, has accompanied more than 1,200 victims of clergy abuse through the maze of legal and canonical procedures.

Rete L’Abuso, founded in 2010, cooperates with many other similar associations globally to promote accountability in the Catholic Church. A carefully updated and interactive map on its website monitors the movements of abusive priests, the safety of dioceses and the legal procedures currently underway. 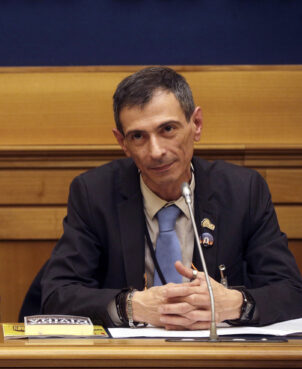 Survivor of sex abuse Francesco Zanardi meets the media during a news conference in Rome on Feb. 21, 2019. Advocates for Italian clergy sex abuse victims launched a campaign Feb. 15, 2022, to demand an inquiry into abuse and cover-up in the Italian Catholic Church, lamenting the deference still showed the hierarchy in Italy that has conditioned everything from criminal prosecutions to media coverage of the problem. Zanardi, founder of the Rete L’Abuso advocacy group that has worked for years to try to raise awareness of clergy sexual abuse in Italy, is spearheading the new initiative. (AP Photo/Gregorio Borgia, File)

Zanardi said he does the hard work of keeping tabs on abuser priests because no one else, church or state, has made an effort so far.

From Spain to France, Ireland and Australia, local governments have doubled down on the Catholic Church to launch independent inquiries into clerical abuse cases. But the Italian government has yet to do so.

Zanardi believes there exists “a tacit agreement” between the Italian church and state, but he is not optimistic in finding actual proof of this supposed conspiracy. Evidence of this incestuous relationship are to be found, according to Zanardi, in how priests are treated once they are found guilty of abuse.

A concordat signed between the Holy See and the Italian state in 1984 is widely interpreted as allowing bishops and even priests to not testify in a penal trial due to the secrecy of their ministry. The treaty is partly responsible for why Italian magistrates are hesitant when taking on a clerical abuse case, Zanardi said.

For Mario Caligiuri, who heads the legal team of Rete L’Abuso, the concordat is only part of the problem. Over the phone with RNS, he said Italian culture makes it difficult for clerical abuse cases to come to light.

In Catholic-majority Italy, “there is a reality where the church has a strong influence,” he said. The statute of limitations, the lack of adequate compensation for victims of abuse and the extraordinary length of penal trials — which can sometimes last decades — have contributed to making the pursuit of justice by victims of clergy abuse in Italy extremely difficult, Caligiuri said.

More than anything, victims are often left unheard in the Italian legal system, the lawyer said, not only in cases of clerical abuse. The root of this indifference is to be found in “sexism and a patriarchal structure,” according to Caligiuri, which places a higher burden on victims to prove abuse cases.

“I have felt shame in watching how victims are treated” in the Italian and Vatican legal system, said Caligiuri, who has decades of experience in handling abuse cases in the country.

On Feb. 15, Rete L’Abuso joined eight other Italian groups to demand the Italian government launch an investigation into sexual abuse. The campaign, called “Beyond the Great Silence,” hopes to promote awareness and action with the use of the hashtag “#ItalyChurchToo.”

In dioceses around the world that have undergone investigations on sexual abuse cases, the percentage of abuser priests discovered has ranged from 4% to 5% — with the French report suggesting the number is closer to 7%. These statistics might prove damning for Italy — the country with the highest number of Catholic clergy in the world, exceeding 44,000.

“We cannot ignore the structural, cultural and ecclesial differences in our country compared to others, starting with the very high number of dioceses,” said Cardinal Gualtiero Bassetti, president of the Italian Bishops’ Conference or CEI, speaking to the Italian daily Il Corriere della Sera on Jan. 30.

For this reason, Bassetti suggested the investigation should take a “qualitative” approach that looks at abuse prevention efforts and formation of not only priests but laypeople as well. Pope Francis has urged Italian bishops to address the question of clerical abuse on several occasions, but so far, they have limited themselves to opening listening centers for victims and imposing a “moral obligation” to report sexual abuse to Italian authorities.

Bassetti is due to retire this year, and as bishop of Rome, Pope Francis will personally select the head of the Italian Bishops’ Conference. The bishops are currently divided over whether the sex abuse investigation should be handled by the church or outsourced.

But activists are tired of waiting for the church or the Vatican to act and think it’s high time for the Italian state to take the reins, something the United Nations also asked that Italy do in a scathing 2019 report.

“It’s inadmissible for the church to take over the competence of the state,” Caligiuri said, stating that a church-led investigation would constitute a conflict of interest. Only an independent parliamentary commission can help break “this conspiracy of silence,” he insisted.