What might young Americans’ increasing willingness to identify as LGBTQ mean for the future of Christianity in the United States?

Contrary to popular belief, around half of all LGBTQ people in the United States identify with some faith tradition, though they do not attend religious services as frequently as members of the general public. Several mainline Protestant denominations accept LGBTQ people as members and clergy, and more affirming congregations are being founded by LGBTQ people.

But the newest Gallup poll doesn’t bode well for Christian groups in the United States, which have already seen their numbers decline over the past few decades. Why? First, LGBTQ people are more likely than straight people to identify with a minority faith rather than Christianity, in part because they view religions such as Buddhism and Judaism as more welcoming toward LGBTQ people. Members of Generation Z are particularly more likely to identify with minority faiths. 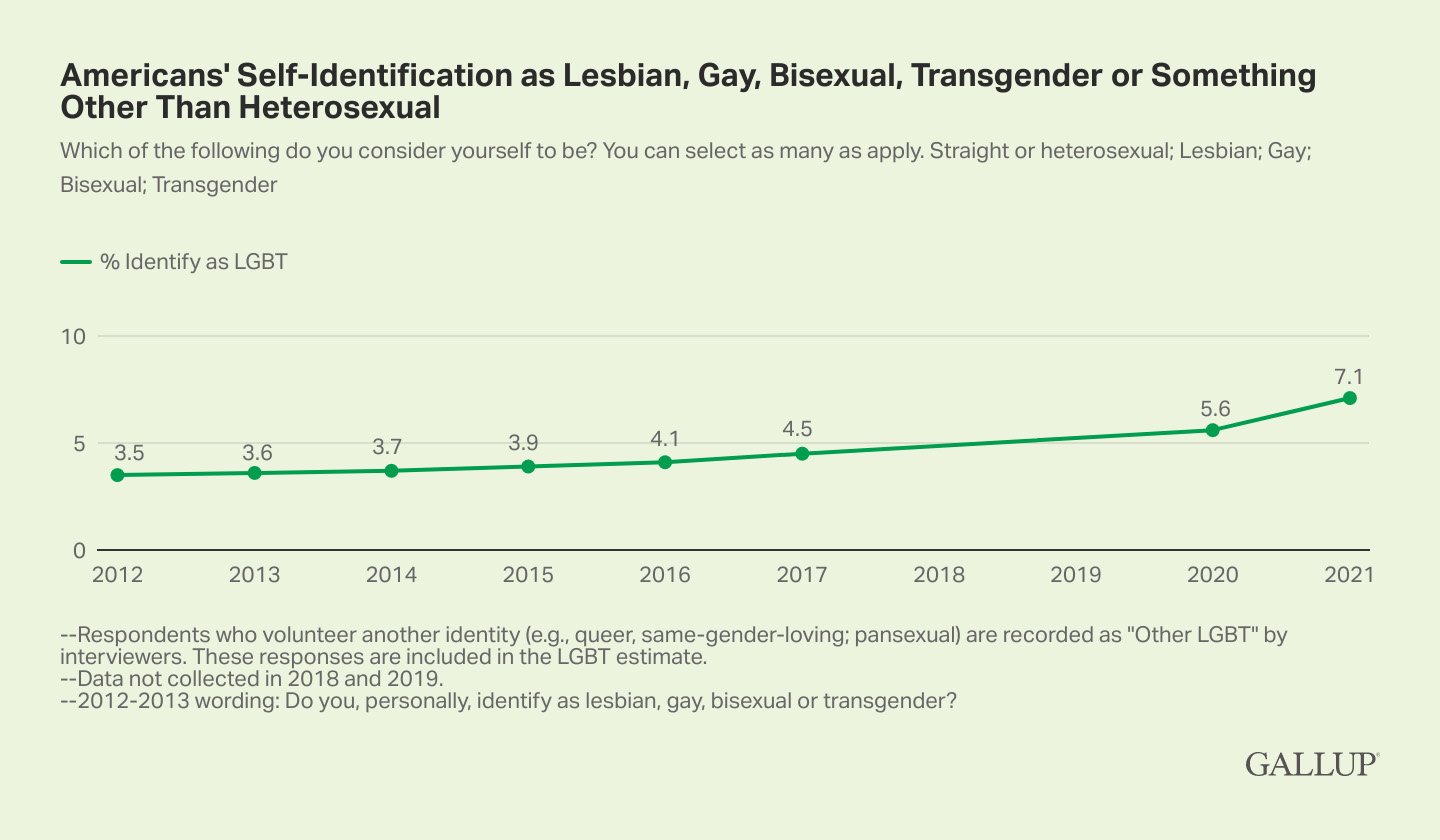 “Americans’ Self-Identification as Lesbian, Gay, Bisexual, Transgender, or Something Other Than Heterosexual” Graphic courtesy of Gallup

In addition, many young LGBTQ Americans are opting out of organized religion altogether, partly because evangelical Christian denominations and the Roman Catholic Church oppose LGBTQ rights and same-sex marriage. Indeed, a recent study showed that young LGBTQ Americans are less likely than older LGBTQ Americans to identify as Christian, and many LGBTQ people view the largest organized religious traditions in the United States as unfriendly. Recent state laws censoring LGBTQ topics in public schools because they offend Christian sensibilities only enhance LGBTQ people’s distrust of many Christian denominations.

Finally, data from the Public Religion Research Institute show that younger generations of all sexual and gender identities are paying attention to how Christian groups treat LGBTQ people. Because most Americans have friends or family members who identify as LGBTQ, even many non-LGBTQ Americans are willing to change their religious affiliation when they believe a tradition mistreats LGBTQ people. As many as one-third of millennials, for example, no longer identify with the religion of their childhood, and they often cite their childhood religion’s mistreatment of LGBTQ people as an important factor in their decision to leave. 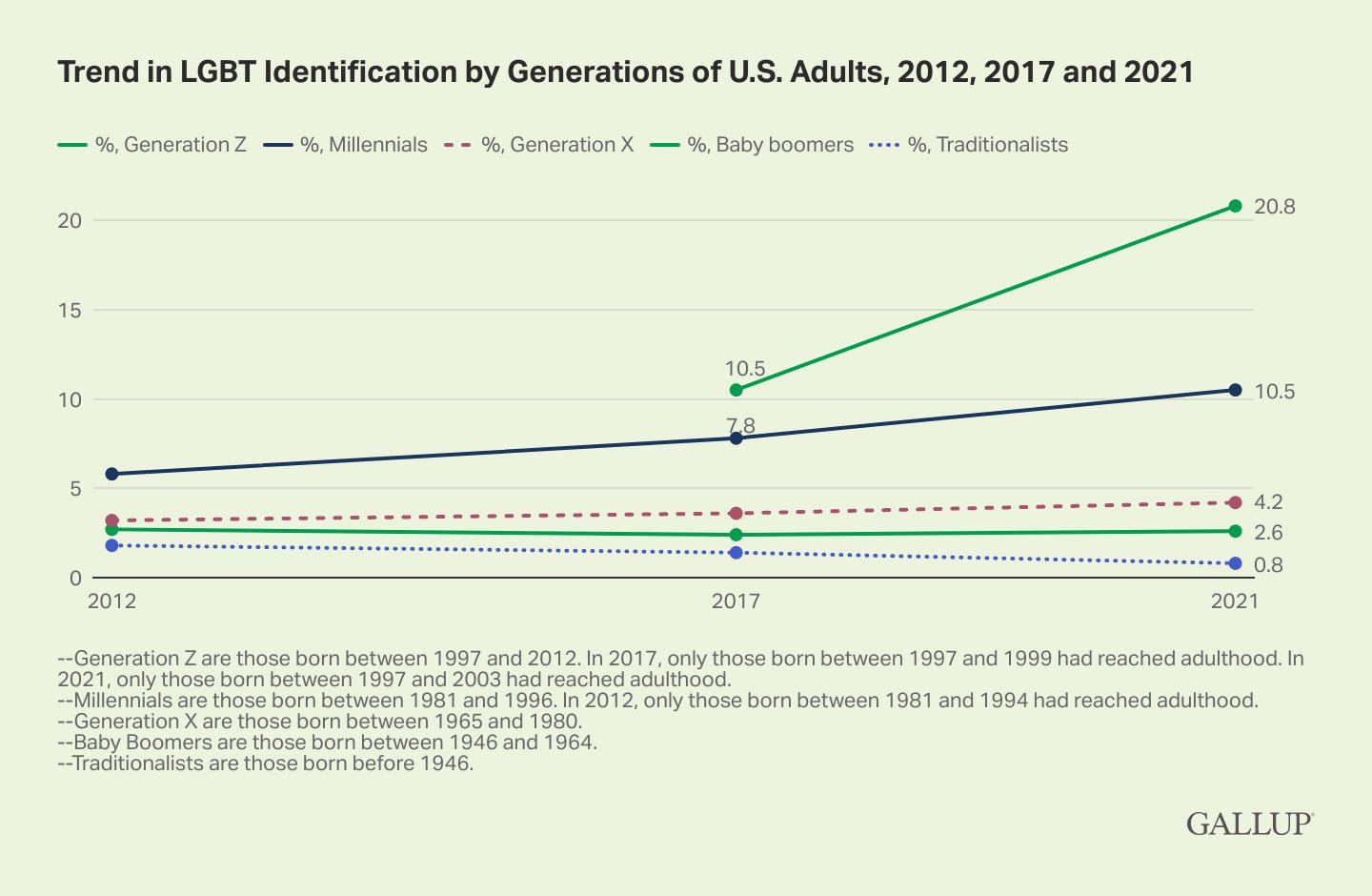 It is quite possible, then, that the increase in LGBTQ identifiers will accelerate the increase in non-Christian identification in the United States. Still, this outcome is not inevitable, and the recent Gallup poll presents an opportunity for some Christian traditions to reconsider their treatment of LGBTQ people.

Churches in neighborhoods with many LGBTQ residents, even those affiliated with socially conservative denominations, have begun to practice inclusivity, although some have been punished for those practices. Christian denominations continue to find creative ways to reorganize so they can fully embrace their LGBTQ members. Even many religious colleges and universities are opening their doors to LGBTQ young adults. A recent study showed that nearly half of all Christian colleges and universities in the United States are home to LGBTQ student groups.

The latest Gallup poll isn’t a death knell for Christianity in the United States. Although many Christian groups’ stances on LGBTQ issues have generated a backlash among young Americans, Christian groups that take proactive steps to affirm LGBTQ people may have a chance to win them back.

RELATED: United Methodist meeting to consider split is still on … for now

(Jonathan S. Coley is assistant professor of sociology at Oklahoma State University; R.G. Cravens is assistant professor of political science at California Polytechnic State University. Both are public fellows at the Public Religion Research Institute in Washington, D.C. The views expressed in this commentary do not necessarily reflect those of Religion News Service.)