(RNS) — While the secular media tries to guess Vladimir Putin’s motives in Ukraine, one important aspect of the current situation has gone largely ignored: religion.

I’m no expert in Eastern European history, but my training in church history offers a lens into the events in Ukraine. In effect, the world is witnessing a new version of an old tale — the quest to re-create an imperial Christian state, a neo-medieval “Holy Roman Empire” — uniting political, economic and spiritual power into an entity to control the earthly and heavenly destiny of European peoples.

The dream gripping some quarters of the West is for a coalition to unify religious conservatives into a kind of supra-national neo-Christendom. The theory is to create a partnership between American evangelicals, traditionalist Catholics in Western countries and Orthodox peoples under the auspices of the Russian Orthodox Church in a common front against three enemies — decadent secularism, a rising China and Islam — for a glorious rebirth of moral purity and Christian culture.

In the United States, Trumpist-religion is most often framed as “Christian nationalism.” It is, indeed, that. But it is also more — it is the American partner of this larger quest for Christian internationalism. No one has articulated this more clearly than Steve Bannon, who, despite his legal troubles, remains a significant force as a kind of philosophical apostle in right-wing Christian circles for a neo-Christendom.

There have been a few bumps on the way to this Humpty Dumpty hope of reassembling a Christian Roman Empire, however. Interestingly enough (and I’ll leave this to future historians to sort out), American evangelicals bought into this neo-medieval project wholesale, having been prepared for far right nationalism by their fondness for racial and gender hierarchies. The most democratic form of Protestantism will evidently sell its soul to keep Black people and women in their “place.”

The hardest partner to recruit to neo-Christendom has been the Catholic Church. The election of Pope Francis in 2013 proved a major stumbling block for the emergence of a right-wing global political order. The new pope eschewed all such schemes in favor of opening up the church to the poor, outcasts and the marginalized with a social vision that questions capitalism and the destruction of the Earth. Neo-medieval Catholics — often referred to as “trad Caths” — haven’t taken this well and have mounted a decade of resistance to Francis that may well culminate in something like the Avignon schism of the 14th century. So far, however, Pope Francis remains in charge. 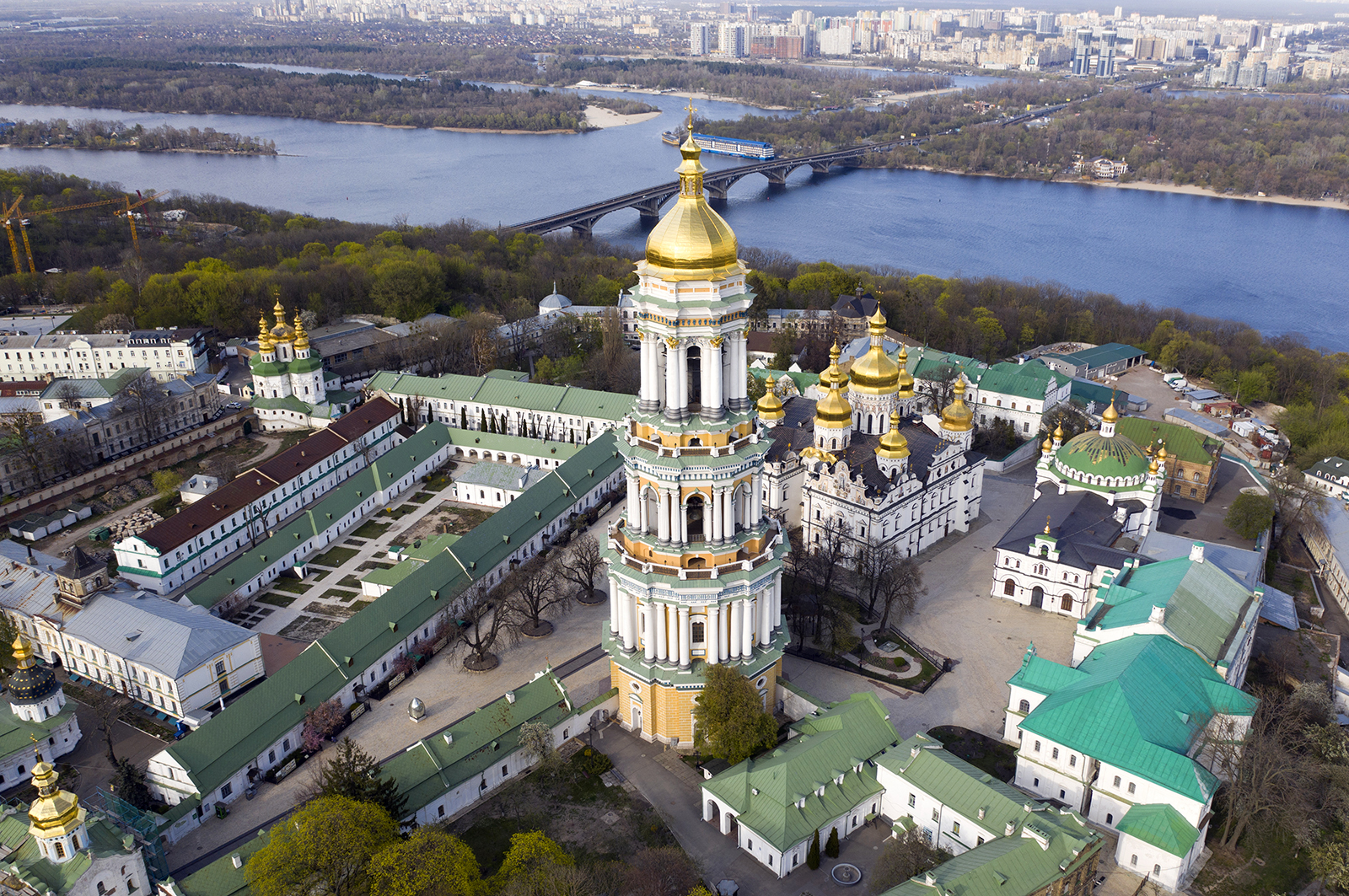 An aerial view of the ancient Kiev Monastery of the Caves in Kyiv, Ukraine, April 13, 2020. (AP Photo/Efrem Lukatsky)

Until recently, it appeared Vladimir Putin had successfully co-opted Orthodoxy into this globalist triumvirate, making for a surprising love fest between American evangelicals and the Russian strongman. Just this week, former Secretary of State and stalwart evangelical Mike Pompeo praised Putin. Outside observers might think Putin was firmly in control of the future of Orthodoxy vis-a-vis neo-Christendom.

Except he wasn’t. The Ukrainian Orthodox had other ideas.

And that’s a real problem. Because when it comes to Russian Orthodoxy, Kyiv is essentially Jerusalem.

More than a thousand years ago, in the 980s, the pagan Prince Vladimir of Kyiv consolidated the Rus people of modern-day Belarus, Russia and Ukraine into a single realm. When his emissaries reported back to him on the glories of Christian Constantinople, Vladimir converted to their religion, brought his people into the Byzantine church through a mass baptism and married a Christian imperial princess. Under his rule, Kyiv became a prosperous and peaceful city at the heart of a new Christian empire, complete with churches, courts, monasteries and schools, as well as civic programs to care for the poor. Known as Vladimir the Great, he was eventually canonized as St. Vladimir and his memory is celebrated by Eastern Orthodox Christians, Catholics, Anglicans and some Lutherans.

In the 1200s, however, Kyiv suffered a number of assaults from rival Rus princes and Mongol invaders. Many Rus people moved north and east to the newer cities of Vladimir and Moscow where, under the czars, the Russian church eventually grew to be one of the richest, most powerful churches in the Orthodox world. With the shift, an Orthodox tradition founded under the auspices of Constantinople became a church under the authority of a patriarch in Moscow.

This has created tension between Ukraine and Russia for centuries, in some ways brought to a head in the Soviet period, with rival forms of Orthodoxy either choosing to resist communism or cooperate with Moscow. When the Soviet Union collapsed, Ukraine had several different Orthodox churches, only one of which was in close relationship to Moscow.

In 2018, two of those Ukrainian churches and some of the Moscow-leaning Orthodox parishes joined in a union and created a newly unified Orthodox Church of Ukraine, a fully independent national ecclesial body under no control from Moscow, with its head in the ancient seat of Orthodoxy in Kyiv. Ecumenical Patriarch Bartholomew I, center right, the spiritual leader of the world’s Orthodox Christians, sits with Patriarch Kirill of Moscow, center left, prior to their meeting at the Patriarchate in Istanbul on Aug. 31, 2018. Orthodox Patriarchate’s Metropolitan Emmanuel of France says “there’s no going backwards” in granting Ukrainian clerics full ecclesiastic independence from the Russian Orthodox Church to which they have been tied for hundreds of years. (AP Photo/Lefteris Pitarakis)

Putin and the Moscow Russian Orthodox church authorities protested. They’ve been claiming the 1,000 years of Kyiv Christianity as its own — basically appropriating Ukraine’s church history — to the point of erecting a gigantic (and controversial) statue of St. Vladimir outside of the Kremlin. Putin wants the weight of tradition on his side and St. Vladimir validates both his religious and political aspirations. There should be no doubt that Putin sees himself as a kind of Vladimir the Great II, a candidate for sainthood who is restoring the soul of Holy Mother Russia. The Ukrainians, on the other hand, would like to remind the Russians that they were the birthplace of both Orthodoxy and political unity in Eastern Europe.

Further infuriating Putin is the fact that the Ecumenical Patriarch of Constantinople recognized the Orthodox Church of Ukraine as an independent body. While this fight between Moscow and Kyiv is internally significant for Russians and Ukrainians historically, it also has larger global ramifications for the future. Katherine Kelaidis at Religion Dispatches explains:

On one side of the conflict is the Ecumenical Patriarch of Constantinople, the culturally and linguistically Greek cleric, who has historically claimed leadership of Orthodoxy. For the better part of a century, the Patriarch of Constantinople has moved toward the West and arguably many of its values. Today’s incumbent on the Apostolic Throne of St. Andrew speaks the language of human rights, religious freedom, and trust in science. This position arises in no small part from the Patriarchate’s own precarious role as a representative of minority religion in Turkey.

At the same time, the Patriarch of Moscow, having reclaimed much of his post’s former political influence in a post-Soviet Russia, has taken to spearheading not only the traditionalist Orthodox cause, but acting as support and symbol to religious conservatives around the world.

The conflict in Ukraine is all about religion and what kind of Orthodoxy will shape Eastern Europe and other Orthodox communities around the world (especially in Africa). Religion. This is a crusade, recapturing the Holy Land of Russian Orthodoxy, and defeating the Westernized (and decadent) heretics who do not bend the knee to Moscow’s spiritual authority.

If you don’t get that, you don’t get it. Who is going to control the geographical home, the “Jerusalem,” of the Russian church? Moscow? Or Constantinople? And, what does claiming that territory mean for Orthodoxy around the world? Will global Orthodoxy lean toward a more pluralistic and open future, or will it be part of the authoritarian neo-Christendom triumvirate?

We don’t know how this is going to unfold. But — here’s the key point — economic sanctions are unlikely to work if you believe your side is divinely sanctioned. That’s what Putin thinks he’s got: the approval of God.

You just know he wants to celebrate Easter — this one or next — in Kyiv.

For more on the connection between Bannon and Putin, listen to yesterday’s episode of “Ruining Dinner,” my podcast with Tripp Fuller. Fuller is research fellow in theology and science at the University of Edinburgh and host of the “Homebrewed Christianity” podcast.

(Diana Butler Bass is an award-winning author of 11 books, including her most recent, “Freeing Jesus: Rediscovering Jesus as Friend, Teacher, Savior, Lord, Way, and Presence.” This article was originally published at her substack “The Cottage.” The views expressed in this commentary do not necessarily reflect those of Religion News Service.)