(RNS) — At the top of the website for the Ukrainian Orthodox Church of the USA is a simple, three-word message.

“May God hear our loving petitions and soften the hearts and minds of all, those within and outside Ukraine, during these dangerous times,” wrote the UOC’s Council of Bishops, in a statement responding to news of the Russian invasion this week.

The bishops of the UOC, founded by immigrants, were among a host of religious leaders asking God to intervene on behalf of Ukraine. The prayers asked for an end of hostilities and for the protection of civilians — and in at least one case, for a defeat of Russian forces.

“Send your heavenly legions, O Lord, commanded by the patron of Kyiv, Archangel Michael, to crush the desires of the aggressor whose desire is to eradicate our people,” the UOC bishops wrote in an online prayer.

Calls for peace also echoed from the Russian Orthodox Cathedral in Washington, D.C., which planned to hold a prayer for peace Thursday (Feb. 24), according to an announcement on the cathedral’s website. The announcement linked to a “prayer for the cessation of civil strife.”

“Lord Jesus Christ our God, look down with Thy merciful eye upon the sorrow and greatly painful cry of Thy children, abiding in the Ukrainian land,” that prayer read. “Deliver Thy people from civil strife, make to cease the spilling of blood, and turn back the misfortunes set against them.”

Patriarch Kirill of Moscow stressed the common religious history of Russia and Ukraine “dating back to the baptism of Russia by the holy prince Vladimir, equal to the apostles,” and said that the Orthodox church could help heal the current conflict, reported the Orthodox Times.

“As Patriarch of All Russia and Primate of the Church, whose flock is in Russia, Ukraine and other countries, I deeply empathize with all who have been touched by misfortune,” Kirill said in a statement. “I call on all parties to the conflict to do everything possible to avoid civilian casualties. I appeal to bishops, pastors, monks and laity with an appeal to provide all possible assistance to all victims, including refugees, people left without shelter and means of subsistence.” 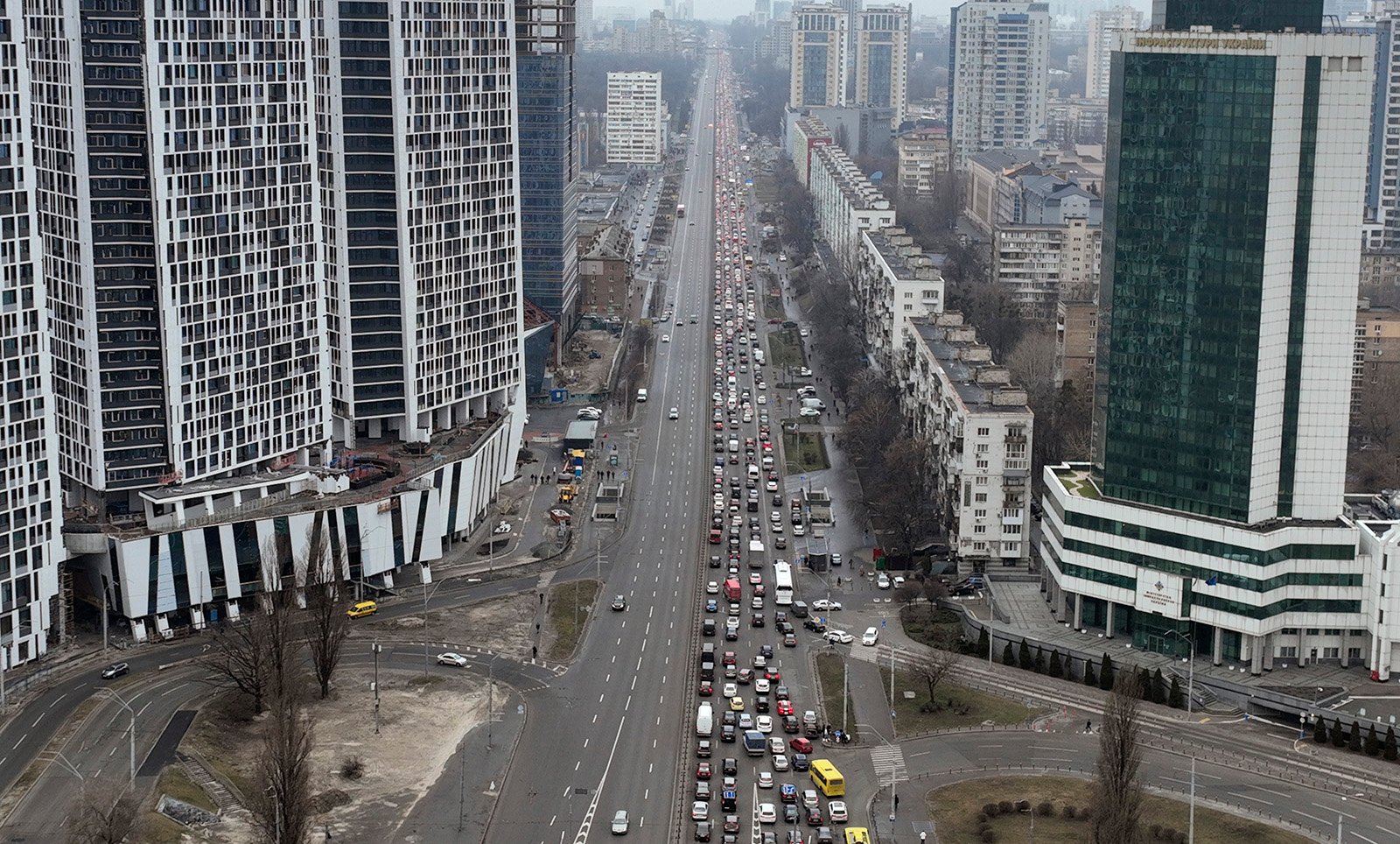 The U.S. Conference of Catholic Bishops asked Catholics to fast for peace on Ash Wednesday (March 2). Bishop David J. Malloy of Rockford, Illinois, chairman of the USCCB Committee on International Justice and Peace, also called for a day of prayer.

“In this time of fear and uncertainty, we stand in solidarity with the Church in Ukraine and offer our support,” Malloy said in a statement. “We call on all the faithful and people of good will to pray for the people of Ukraine.”

We continue to pray for #Ukraine and echo the Holy Father's call for all Catholics to fast on Ash Wednesday, March 2 in a special way for peace and an end to war. Mary, Queen of Peace, protect us from war! #PrayforUkraine pic.twitter.com/SY9MDoIHOM

Faith-based and humanitarian groups expressed concerns about a possible mass exodus of refugees. Along with praying for those affected by the invasion, Krish O’Mara Vignarajah, president of Lutheran Immigration and Refugee Service, called on political leaders to prepare to protect displaced people.

“The humanitarian implications of a full Russian invasion must be a central consideration in the U.S. and international response,” Vignarajah said. “Thousands could lose their lives, and millions more could lose the only home they have ever known. The U.S. and its allies must prepare to respond to the very real possibility of a mass exodus of Ukrainian refugees. Protecting the displaced cannot merely be an afterthought.”

Pax Christi, a Catholic peace organization, encouraged its members to pray and fast and to hold public vigils for peace on Ash Wednesday.

“Pax Christi USA urges the international community to stand united against the invasion of Ukraine and in support of diplomacy and dialogue to bring this crisis to an end,” the group said in a statement.

RELATED: ‘There is still time.’ The Vatican assesses its influence as war breaks out in Ukraine.

In the United Kingdom, the archbishops of Canterbury and York issued a joint pastoral letter in response to the invasion, with calls for prayer along with liturgical texts and readings in support of peace. Archbishop Justin Welby and Archbishop Stephen Cottrell invited Anglican church members to make Sunday a day of peace and to join the call of Pope Francis for prayers on Ash Wednesday.

“Peace, therefore, is so much more than the absence of war,” they wrote. “It is a gift, and it is also a decision, a gift that must be received. It is a choice we make that shapes the way we live well alongside each other. It characterises our relationship with God. It comes into being by seeking justice.”

Leaders of the United Church of Christ began their prayer, posted online, with a quote from the Book of Proverbs: “There are six things that the Lord hates, seven that are an abomination to him: haughty eyes, a lying tongue, and hands that shed innocent blood, a heart that devises wicked plans, feet that make haste to run to evil, a false witness who breathes out lies, and one who sows discord among brothers.”

“Hear our prayers for all those who will die today because of war in Ukraine and other war-torn countries all over this world. Grant them an end to the suffering of this world and eternal peace that is only found in You,” the UCC officers wrote. 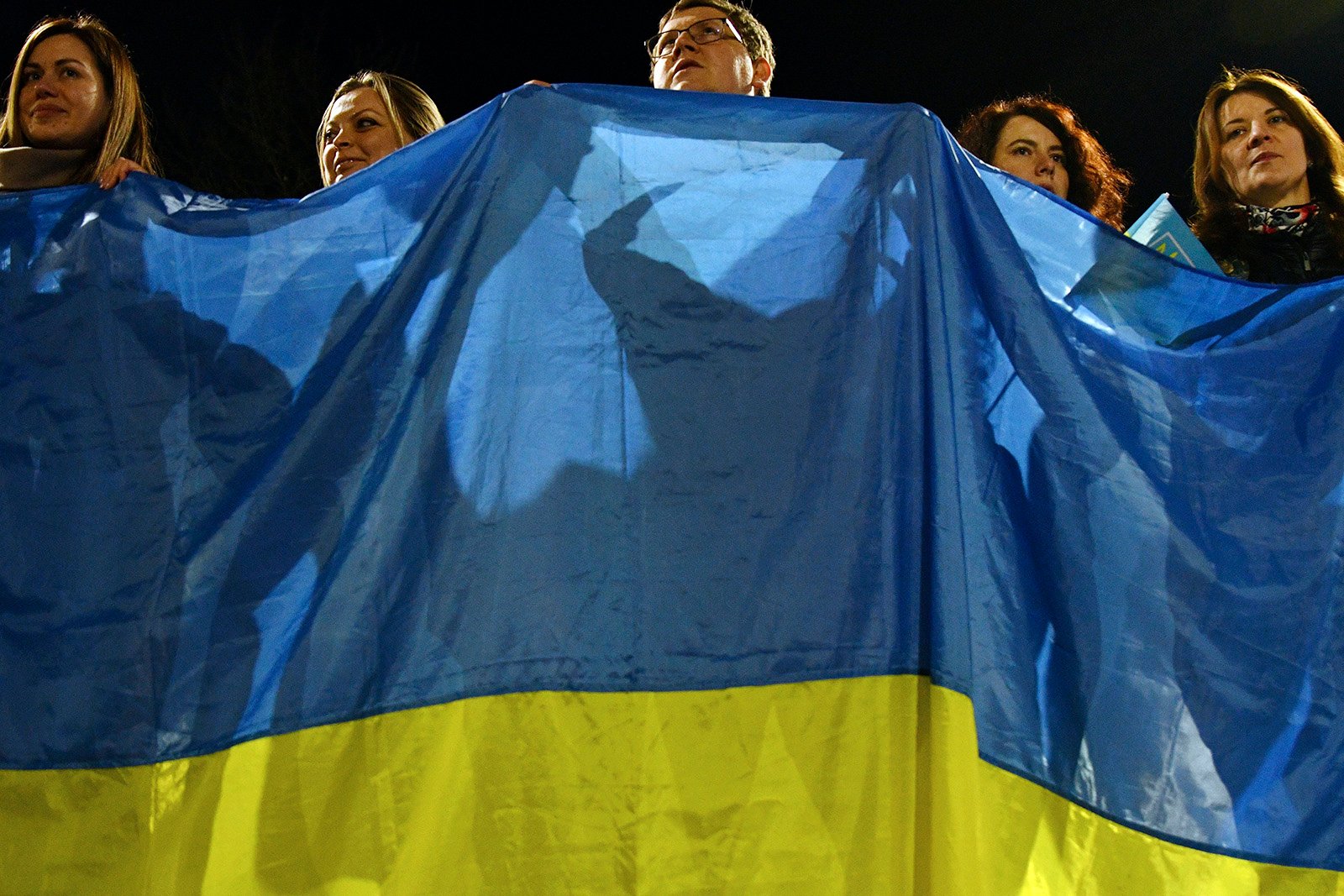 A number of faith leaders took part in an online vigil for peace this week — including Presiding Bishop Michael Curry of the Episcopal Church; Presiding Bishop Elizabeth Eaton of the Evangelical Lutheran Church in America; Rabbi Jonah Dov Pesner, director of the Religious Action Center of Reform Judaism; and Mohamed Elsanousi, executive director of The Network for Religious and Traditional Peacemakers, as Religion News Service reported earlier this week.

“The drums of war are beating louder with each passing moment,” said Tarunjit Singh Butalia of Religions for Peace USA during the vigil. “We must stand up as people of faith and people of peace to speak truth to power.”

Hazrat Mirza Masroor Ahmad, head of the worldwide Ahmadiyya Muslim community, prayed that world leaders would try to de-escalate the situation in Ukraine before it can spread into a wider conflict.

“I pray that the world’s leaders pay heed to the need of the hour and value, above all else, their obligation to ensure the peace and stability of the world. May Allah the Almighty protect all innocent and defenceless people and may true and lasting peace in the world prevail,” he said in a statement.

Prayers for Ukraine were offered during a recent meeting of the Southern Baptist Convention’s Executive Committee in Nashville, Tennessee, and Southern Baptist leaders and other influential evangelicals offered prayers via social media.

Christ have mercy. Pray for Ukraine.

Make Russia pay for what it has done.

Do not imagine for a moment prayer doesn’t matter. Pray for Ukraine. Pray for divine intervention. Miraculous protection. Pray for the presence of Jesus to permeate households & hiding places & be a shield & comfort to them. Pray a psalm—maybe 27 or 31—as intercession.Let’s pray.

“We are gravely concerned to yet again witness armed conflict that will inevitably lead to tragic loss of human lives, including innocent civilians who only desire to live in peace,” the WEA’s secretary general, Bishop Thomas Schirrmacher, said in a statement. “We call for an end to the hostilities, an immediate ceasefire and respect for Ukrainian territorial integrity.”

The American Friends Service Committee, a Quaker peace organization, urged U.S. leaders and the international community to pursue diplomacy and deescalation rather than a military response to the crisis in Ukraine.

The group also passed along a message from Quakers in Ukraine calling for peace. “It is very important for us to convey that Ukrainians are peace-loving people and very kind. In the last two months, when we got together and started our meetings, we agreed that there is no one among us who would see war as the answer, or believe that violence is the way out,” the message read. “We categorically condemn any aggression, expansion, and pressure.”