VATICAN CITY (RNS) — As the threat of war looms once again over Europe, the Vatican weighs its options to promote dialogue and peace, starting with its ecumenical relations with the split Orthodox Church.

Despite the sudden outbreak of violence across Ukraine, the Vatican said in a statement on Thursday (Feb. 24) that “there is still time” for negotiation and peace.

On Thursday, Russian-backed attacks in several cities in Ukraine confirmed President Vladimir Putin’s military commitment to overthrow what he considers a “puppet government” in the capital of Kyiv. The United Nations and the United States have already promised economic sanctions as nations scramble to find alternatives to a bloody war — and the ever-present threat of nuclear attacks.

“The tragic scenarios that everybody feared are unfortunately becoming a reality,” said Cardinal Pietro Parolin, Pope Francis’ right-hand man as the head of the Vatican’s Secretariat of State, in the Vatican’s statement.

Parolin said believers hold on to the hope there might still be “a glimmer of conscience in the mind of those who hold the destinies of the world in their hand.” For now, he continued, Catholics should heed the pope’s appeal to pray and fast next Wednesday “for peace in Ukraine and the entire world.”

The influence of the Vatican in modern conflicts goes beyond prayer and fasting. Pope Francis has already proved the efficacy of the Vatican’s soft power in avoiding conflicts in the past. Putin himself credited Pope Francis’ letter, sent to him during the G-20 summit of 2013, with stopping the Russian offensive in Syria.

On Wednesday, Pope Francis made several heartfelt appeals to all parties involved in the Ukrainian conflict to engage in dialogue and diplomacy for peace and he called on world leaders to avoid any action that might harm civilians and undermine international law.

When it comes to the Vatican’s diplomatic arsenal to promote peace in Ukraine, there are two main channels: diplomacy and ecumenism.

As head of the Catholic Church overseeing 1.2 billion Catholics around the globe, the Vatican has a tested policy of not taking sides in conflicts. From the Vatican’s perspective, Russia isn’t the common enemy to be taken down, but a country to engage with in dialogue.

“In the Vatican’s view, the 2015 Minsk Accords signed by Ukraine, France, Germany, and Russia provided an achievable formula for peaceful resolution to the Donbas conflict,” said journalist Victor Gaetan, author of “God’s Diplomats: Pope Francis, Vatican Diplomacy and America’s Armageddon,” in an email to Religion News Service on Thursday.

The Minsk accords, updated in February 2015, were aimed at ensuring peace in Ukraine by enacting a ceasefire, putting the protection of borders in the hands of the Ukrainian government and granting self-government to the Donbas regions. “Unfortunately, two successive Ukrainian governments failed to follow that path in any meaningful way,” Gaetan said. 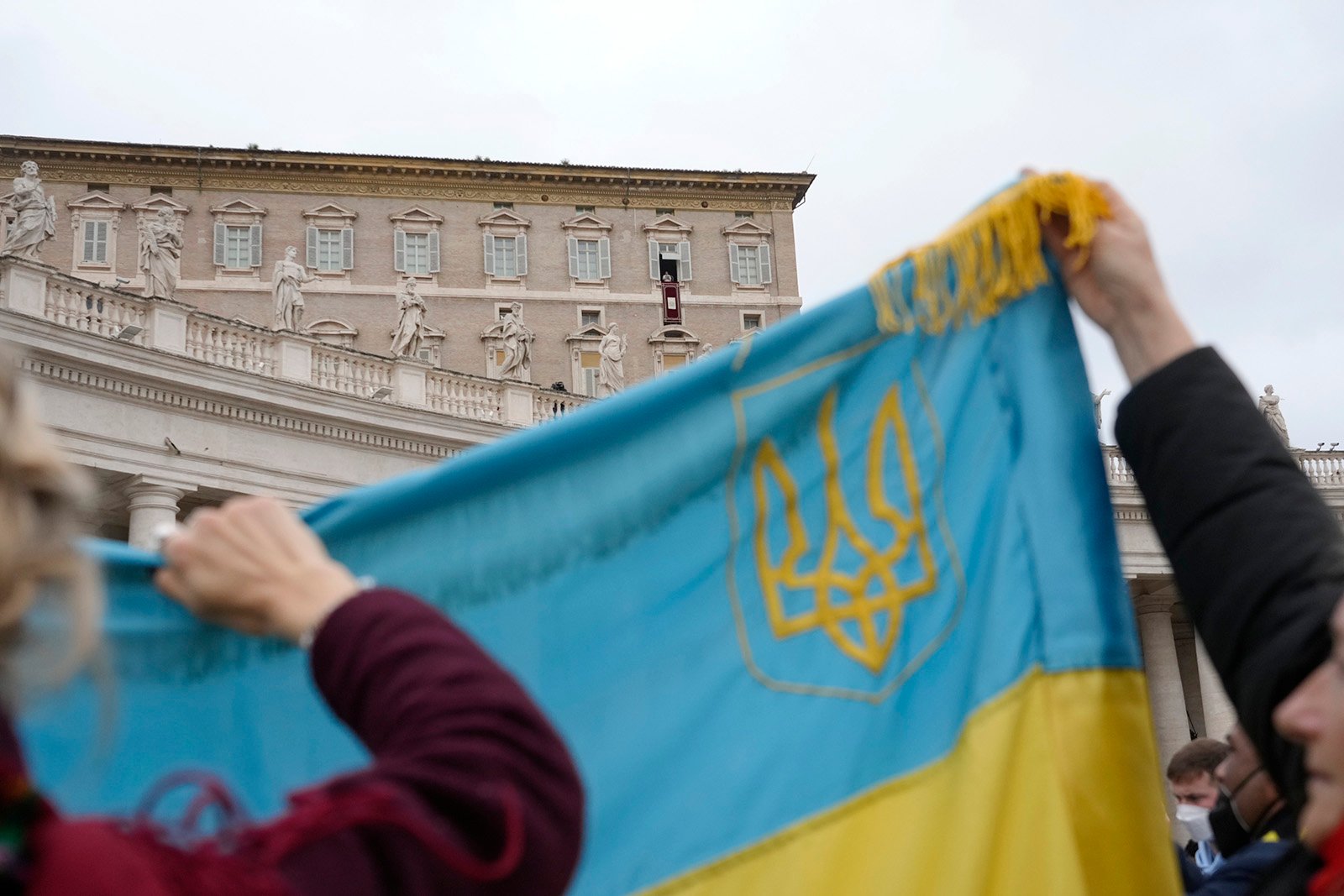 When Pope Francis condemns war in Ukraine, he doesn’t point the finger at Russia because he knows that the undermining of international law, namely that of the U.N., has not been perpetrated by the Kremlin alone, Gaetan said. “Pope Francis reminds us of the unilateral actions perpetrated by successive hawkish U.S. governments following the Cold War’s end,” Gaetan said.

The Vatican diplomacy expert recalled the U.S. invasion of Iraq in 2003, when President George W. Bush sent troops into that country against the wishes of the U.N.’s Security Council and Vatican appeals for peace. “Ironically, unilateral military interventions by the U.S. and its global military posture have reduced prospects for peaceful negotiations around the world,” Gaetan added.

It’s Pope Francis’ and the Vatican’s ability to stand above the conflict that makes them an acceptable dialogue partner for Russia, Gaetan observed, saying the rule of thumb in Vatican diplomacy is that “there should be no winners or losers.”

There are no real theological differences between the two Orthodox churches, which has led Patriarch Bartholomew of Constantinople to avoid using the term schism. But the Orthodox Church in Moscow, the largest Orthodox community in the world, reacted negatively to the split and refuses to attend meetings where the pro-Kyiv Orthodox church is present.

The spiritual dimension of the conflict is certainly felt by Putin, who in his televised message to the Russian people on Wednesday said that “Ukraine is an inalienable part of our own history, culture and spiritual space.” The religious undertones could also be felt at the United Nations, where the U.N. ambassador from Ukraine warned Russian representatives that “There is no purgatory for war criminals. They go straight to hell, Ambassador.”

Ukraine’s U.N. ambassador directly addressed his Russian counterpart at conclusion of U.N. Security Council meeting: “There is no purgatory for war criminals. They go straight to hell, Ambassador.” https://t.co/iqOY0jHTUu pic.twitter.com/sybeINLSJj

Pope Francis has made a concerted effort to rekindle relations with the Russian Orthodox Church and made history when he met with Patriarch Kirill in Havana in 2016. A second meeting is expected to take place this summer, possibly in Finland, according to Russian and Vatican sources.

The conflict in Ukraine “has unsettled historical and religious roots for which only reconciliation can bring peace,” Gaetan said. “But reconciliation requires respectful dialogue, devoid of reciprocal demonization. Pope Francis and Patriarch Kirill have preserved and advanced that kind of dialogue between the Catholic and Russian Orthodox Church.

“The pope still hopes there is leverage on this situation through the Russian Orthodox leadership,” he added.

So far, the Vatican has avoided giving the appearance of taking sides in the spiritual divide in Ukraine. “I have no doubt that the Holy See is doing everything it can to mediate and bring an end to the bloodshed,” said the Rev. Ronald Roberson, associate director of the Secretariat for Ecumenical and Interreligious Affairs for the U.S. bishops and a specialist in relations with Eastern churches.

Roberson told RNS this did not exclude that “the Holy See has been pressuring the Russian Orthodox to come to some sort of resolution of this issue, but so far no dice.” A convoy of Russian armored vehicles moves along a highway in Crimea, Jan. 18, 2022. (AP Photo)

The head of the Greek Catholic Church in Ukraine, Archbishop Sviatoslav Shevchuk, sent a message to a meeting of bishops discussing peace in Italy on Thursday after he decided to stay with his flock in Kyiv. The message took a fiery stance against Russia, “which violated the sovereignty and territorial integrity of our country,” and begged Europe to intervene to stop the current threat.

“These days we are witnesses to the return of the law of the strongest” while Ukraine “defends European values at the price of the blood of its children,” Shevchuk wrote.

The archbishop had previously appealed for Pope Francis to visit Ukraine, where he said the pope would be heralded as “a messenger of peace.” With the war officially underway, it’s unlikely that the pope will make an apostolic visit to Ukraine, but the Vatican’s options for negotiating a peace though ecumenism and diplomacy remain wide open.

RELATED: How should Jews think about Ukraine?