VATICAN CITY (RNS) — Pope Francis on Wednesday decried the “madness” of war as tensions escalate in Ukraine as the leader of Ukraine’s Eastern-rite Catholics suggested a visit by Pope Francis could tip the balance toward peace.

“We continue to beseech the Lord of peace so that the tensions and the threat of war will be overcome in favor of a serious dialogue,” Francis said at his weekly general audience on Wednesday (Jan. 9).

The pope voiced his hope that the “Normandy Format,” periodic talks among Germany, France, Ukraine and Russia, would continue and head off a wider conflict.

“Let us not forget: war is madness!” the pope said.

Ukraine has lived under the shadow of war for eight years, since its powerful neighbor stoked fighting in the Eastern Ukrainian region of Dunbas and invaded, then annexed, Crimea in 2014. Official estimates place the death toll at 14,000 people, with many more internally displaced.

Major Archbishop Sviatoslav Shevchuk, head of the Ukrainian Greek-Catholic Church loyal to the pope in Rome, described his country’s situation to Vatican reporters by video link from his home in Kyiv on Tuesday (Jan. 8), saying, “We are basically surrounded by the Russian army.

“We are under attack,” he added, stating that Ukraine is “under an eminent and imminent danger.

“Ukraine is now in the geographical, historic, economic and social center of this confrontation between the collective West and Russia,” Shevchuk said.

According to the prelate, Ukrainians view Francis as the highest moral authority, no matter their denominational loyalties, in Ukraine, and he believes that a visit by the pope could promote peace far more than any public condemnation. “The people say that if the pope comes to Ukraine the war will end,” Shevchuk said, adding that Ukrainians believe that the pontiff would visit as “a messenger of peace” in the war-plagued country. 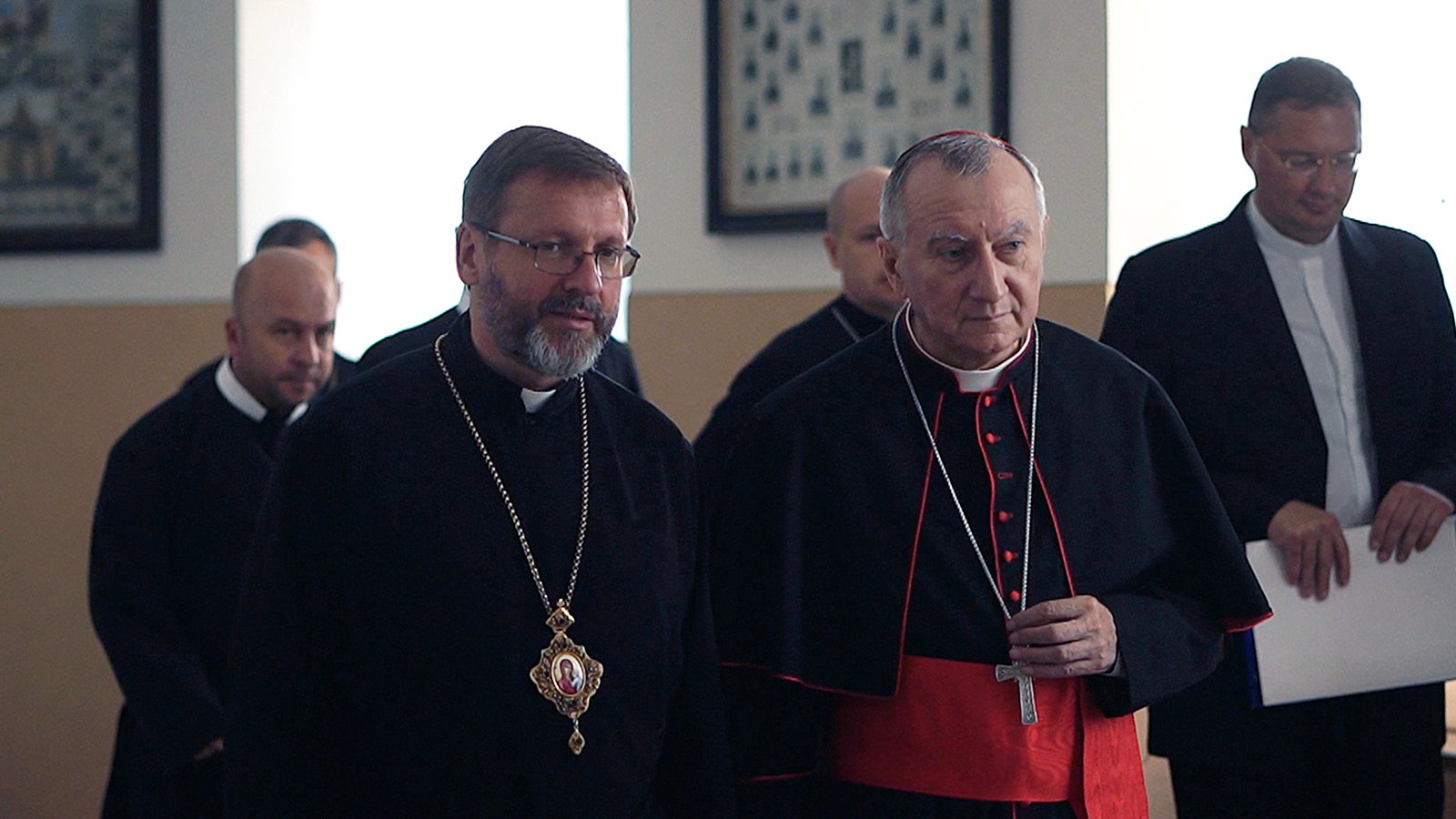 Francis and the Vatican have avoided singling out Russia as the aggressor in Ukraine. During a general audience in 2015, the pope called for an end of the “horrible, violent fratricide” in the country, dismaying many Ukrainians who view Russia as the main culprit in the conflict.

The Vatican seems to hope to navigate the Ukraine situation without harming its longstanding ecumenical outreach to the Russian Orthodox Church. A historic 2016 meeting in Havana, Cuba, between Francis and Patriarch Kirill in Moscow paved the way for the possible historic papal visit to Russia to mend broken relations with its church.

Shevchuk understands that political considerations always come into play in addressing global conflicts, but he nonetheless thinks “it would be really pleasant for Ukrainians if the Holy Father condemned the aggressor and openly said that we in Ukraine are the innocent victims of an unjust aggressor.”

For churches in Ukraine, returning under the Russian umbrella means “returning to the catacombs,” said Shevchuk, who grew up and found his vocation in the clandestine church under Soviet occupation, when priests were ordained in secret. His parents and grandmother joined a schismatic group known as the “penitents,” he said, who saw Pope John XIII’s overtures to the Russian Orthodox Church as a betrayal of their suffering.

But Shevchuck doesn’t regard Francis as any diplomat, and as a church leader himself, he said he grasped the complexities of international frictions.

If the Holy See were to condemn Russia, “it would squash any possibility for future mediation between the opposing fronts,” Shevchuck said, adding that “the style of Vatican diplomacy is to not take a single part in the conflict, but to be above the conflict so as to have the freedom to reconcile and mediate among opposing factions.”

The strength of Vatican diplomacy is not found in finger pointing, the prelate said, but in the work it does behind the scenes.

Shevchuk said that the Vatican has “helped us a lot” in recovering hostages and protecting Catholics in occupied regions of Ukraine. For its part, the local church is focused on providing charity, fighting fake news and promoting unity, the prelate said — but its main focus is prayer.

On Jan. 26 Pope Francis called for an International Day of Prayer for peace in Ukraine, which Shevchuk saw as “a powerful spiritual moment” in a country where 70% of the population identifies as religious.